In February of last year, Marie and I took a fantastic day trip to Charlotte and back. We took I-20 and I-77 there and I-85 back, stopping at eight places. We had such a good time that we wanted to repeat the experience a year later. I made some modifications and alterations, and we didn’t go quite as far as Charlotte, deciding instead to connect Spartanburg and Columbia via US 176. And we did the trip in reverse, starting in Greenville. So about 520 miles instead of 590.

I wanted to do some proper eating with some South Carolina – eastern Georgia specialties. With one notable exception, we had pimento cheeseburgers, chopped pork with spicy mustard sauce, hash over rice or chicken mull at each of the seven restaurants that we visited. I did not intend to schedule our trip for the same day as the Palmetto State’s Republican presidential primary – oddly, Rick Perry, who dropped out earlier in the week, was the clear winner in side-of-the-road signs – but while South Carolina, the state that neglected to recall Mark Sanford, went for Newt Gingrich and gave another big A-OK for adultery, we gave the state a big A-OK for fantastic food and left with as many places added to our wishlist as we took away.

We started things off in Greenville, at the venerable Northgate Soda Shop. I read about this place over at Serious Eats’ A Hamburger Today blog, which, in 2008, excerpted a chapter about it from George Motz’s fun book Hamburger America. (The indefatigable Todd Brock also paid a visit for that site, in May of last year.) I kind of had a bad feeling that we couldn’t get lunch here until eleven on the dot, meaning we got a late start out of Marietta and made it a slow drive, with breaks at a filling station and a rest stop to feed the baby and not get ahead of the clock.

Incidentally, gas in South Carolina’s upstate was much cheaper than I’ve seen it anywhere else in weeks. We’re paying $3.40-plus in the suburbs of Atlanta, and it’s only $3.08 around Greenville. 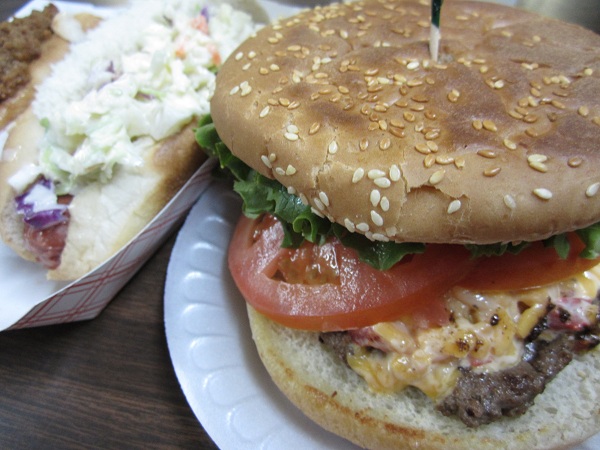 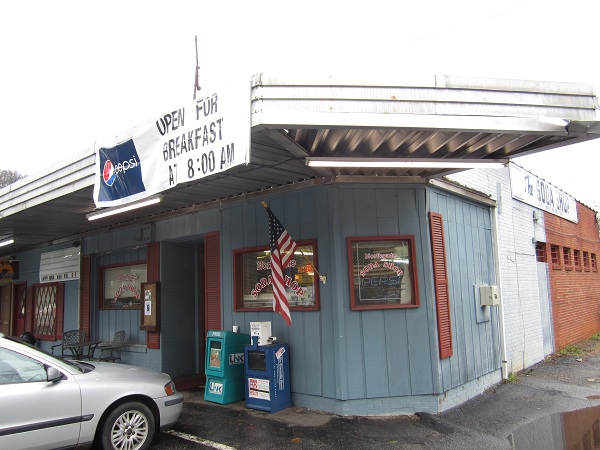 The shop is now on its fourth owner; everybody involved seems to have made it their business to not change much of anything beyond the gradual emphasis of food over greeting cards and sundries. It was opened in 1947 by Charlie and Thelma Davis. Eight years later, they sold it to a man named Rex Collins. In 1965, Jim DeYoung purchased it, and made it legendary over his decades in charge. It was under DeYoung that the practice of immortalizing beloved patrons with brass plaques on the tables emerged. We sat at Randy Coe’s old space. Today, it is owned by Catherine Christophillis, who, I understand, also practices law and runs the neighboring Other Side bar when she’s not, as Motz notes, acting in community theater.

Many other commenters have noted that this place doesn’t seem to have changed a bit over the years, and it’s evident that the staff has worked hard to keep this place as timeless and as timelost as possible. It’s a place where the locals come to have a nice, long meal surrounded by relics of the past. One wall is shelved to capacity with old soda bottles and bric-a-brac, and photographs of old Greenville are framed all around. The older gentlemen at a table near us were discussing native settlements of the 18th Century. It’s a place where the modern world doesn’t intrude much.

Marie, still a few weeks away from being able to enjoy dairy, had to skip out on the pimento cheeseburgers that I enjoyed all day long, but enjoyed a chili dog and a slaw dog. I spent the next several hours fretting that I might have started our day with the best meal that I’d have, because my cheeseburger was just that good. It was a terrific burger on a toasted bun, topped with freshly made and wonderfully gooey pimento cheese, lettuce and tomato. It was completely delicious!

Of course, a soda shop wouldn’t be a soda shop without neat, hand-mixed treats. This was too early in the day for desserts – we had so much on the agenda that we passed on either potato chips or fries with our food – but we did try out some of their hand-mixed drinks. They offer some neat concoctions like a cherry smash, which is cherry syrup and soda water, and a really neat thing with chocolate ice cream and cherry syrup in Pepsi, but Marie decided on a limeade, and I went with a half-lemonade, half-orangeade. They were wonderful, and just the perfect accompaniment to the cheesy burger.

I loved this place completely, and insist that everybody try it out, but there was so much more to do, and so many more miles to cover, so we had no time to linger. Our next stop was just a couple of streets over.

Other blog posts about Northgate: