A couple of Fridays ago, my plans got changed. There’s a restaurant – it would be churlish to name them before I give them another try, so let their identity slide – that I had hoped to visit some time ago. Now, I knew that I wanted to go get some lunch on Friday, but not where. On Thursday evening, I opened the brand new issue of Southern Living that had arrived in our mailbox, and wowed at the description of an item that this place makes. It isn’t on their menu; you have to know to ask for it. So at eleven sharp, I arrived, ready to eat, and grumbled that they didn’t open for another half hour. I sat in Starbuck’s with a mediocre doughnut and read for a bit. Eventually, I walked over, placed my order, paid my money, and was then told that, oh, me oh my, they weren’t going to have this interesting item today after all. I got my money back and looked for something else to eat.

I took the risk and left this little strip mall, which I later learned is a good way to get your car booted, and walked over to Falafel King. I recall when this oddly-shaped building was a Domino’s Pizza. In the 1980s, I would sometimes come to meetings of the local Doctor Who fan club, which met in Emory’s White Hall, and we’d sometimes walk past the Domino’s on our way over to window shop at a record store called Music, Music, Music. Back then, the building’s bizarre roof was baby blue, and today it is a drab yellow, but it’s still a lovable curiosity. 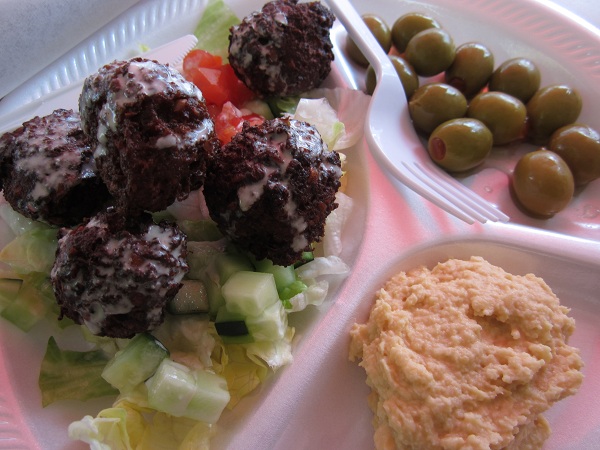 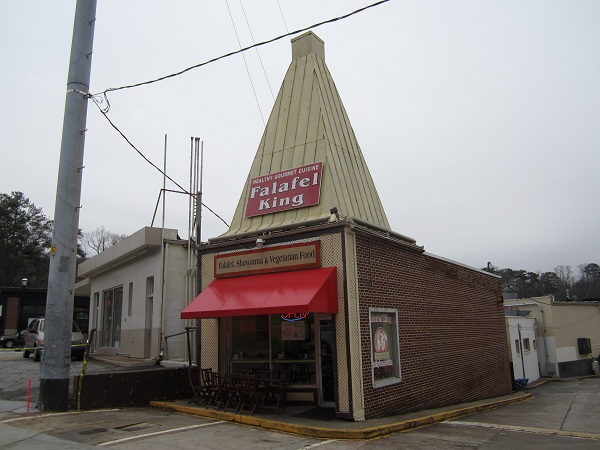 This tiny little place is run by a Korean couple who also serve up sushi and udon. Report after report suggests that these are far better than anybody expects, but those weren’t what I was in the mood for. They are apparently the second owners. The original Falafel King moved his business to Athens in 2007, and operates on Baxter Street in a former Pizza Hut that has been home to sixty-eleven different restaurants.

The falafels at his original location are fried up to order, so there’s a short wait for them. They are very crispy, with a soft inside. They’re a little dry, even with a drizzle of a white sauce over them. I was pleased with the little hot sauce they came with. There is a small selection of sides with the plates. The hummus was pretty good. I was torn between grape leaves and olives and settled on the latter. Nothing was really amazing, and the falafels were not in the same league as OU for U Cafe in Dunwoody, but it was a satisfactory meal in a fun place.

I got lucky and avoided a boot, whereas several of the commuters in the lot behind Starbucks and Wonderful World didn’t that afternoon. I’m not sure that it’s worth risking the parking trolls of Emory Village for a return visit, unless I can nail down one of the few spaces specifically marked for this restaurant. Emory Village has all these signs and websites about improvements to the shopping experience. What they need to do is get their act together and coordinate short-term, low-cost pay-parking at each of the seven or eight different small lots in this neighborhood and let people wander from business to business without worrying about their car, or starting the engine to move it three hundred feet from one dedicated lot to another. There’s no falafel in the world, and nothing listed in Southern Living, that’s worth this kind of headache.