I first heard about OU for U Cafe several weeks ago, and was excited about having such a neat-sounding place available just a traffic light away from Marie’s job. Since I have a couple of short days each week, then, assuming she’s not trapped all day in meetings, I could take her to lunch somewhere in Dunwoody and get her back before her employer falls apart without her.

That might just happen when she takes maternity leave.

Despite a glowing review from Food Near Snellville, it was several weeks before Marie and I could get our schedules synched enough to have lunch together. It was certainly worth the wait; if there’s a better lunch place in this neighborhood, it’s news to me. There’s a Rising Roll Gourmet about a stone’s throw from OU for U, and it’s not a tenth as good as the delicious, kosher food in this deli.

(If, unlike me, you actually have a brain, the “OU” pun might have clued you into this being a kosher business. Me, I read that it was kosher, and I saw the name, but was somehow unable to connect the dots. Then again, it took me more than a decade to figure out why comics writer Pat Mills named a squabbling double-act “Ro-Jaws and Hammerstein.” Being married to a punster like Marie has not helped; it’s just made me close my eyes.) 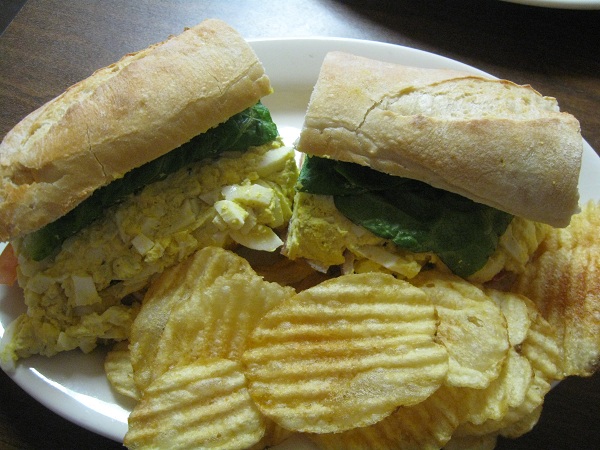 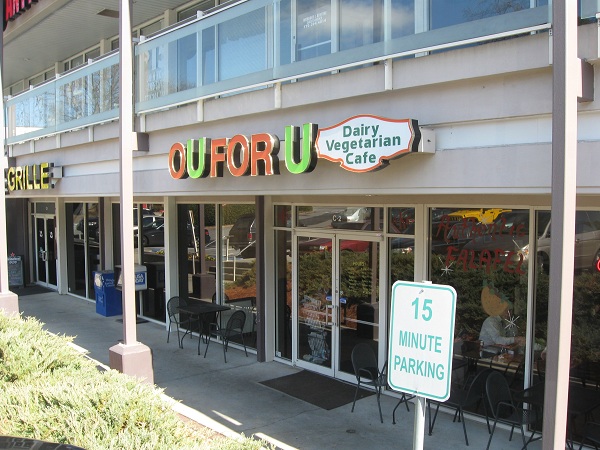 Considering the suggestions made by other writers, I told Marie that both the egg salad and the falafel came recommended. That worked for her; she ordered the egg salad and a small cup of cream of mushroom soup. I thought the egg salad was pretty good but not extraordinary, but the soup was really excellent. My own lunch was sort of the inverse of hers; I had a tomato-and-stuff soup that was okay, and not nearly enough bread along with it. I should have gone with the lentil soup; everybody seems to be raving about it.

Now, that falafel on the other hand… let me tell you about this. For many years, I have told and retold the story of these unbelievable falafels that I used to get in Athens.

In the mid-nineties, there was a gentleman – I used to think he was from Turkey, but a part of me is saying that’s wrong – who came to Athens to clean house for his daughter while she was in a doctoral program at UGA. During the day, he rented a cart and started serving the sort of grub that he used to have back home from a little space on whatchacallit street, beneath Park and Leconte Halls and across from the P-J plaza, a discreet distance from the guy with the hot dog cart. I had a couple of pretty good sandwiches from him and then I tried his falafel and that was that. I had another falafel for lunch from this guy every single day for the rest of the quarter. Then the term ended, my work and class schedule became stupid, his daughter got her doctorate, and that was the end of the falafel cart.

OU for U didn’t serve me a falafel that good, but it was the first time in fifteen years that I’ve had a falafel come close enough to remind me of what I’ve missed. Alternating between a little extra chilled tahini from a squeeze bottle and some punch-packed hot sauce, this was a remarkable little sandwich. I would not mind another trip out that way at all.

In July 2012, OU’s owners, while still keeping kosher, elected to change their name and also changed the menu quite considerably. Now called Cafe Noga, they are no longer vegetarian.

Other blog posts about OU for U / Noga:

2 thoughts on “OU for U Cafe, Dunwoody GA (CLOSED)”