When I planned our eight-meal, 600-mile trip through South Carolina, I also divided up the driving chores, optimistic that Marie and I would each handle about half of the load. However, I noticed that she was really getting tired while I was driving back down I-85 from Charlotte. She passed on a snack at Spartanburg’s Del Taco, was so beat by the time we arrived at The Beacon that she wasn’t sure whether she wanted lettuce on her hamburger, and, taking the wheel for what was planned to be the 120-mile leg from Spartanburg to our final restaurant destination in Braselton, Georgia, she took a deep, deep breath and gave it her best, but still pulled over before we left the state, completely exhausted and unable to stay awake. She did a terrific job, but this road trip took an awful lot out of her. I took over the driving and she closed her very patient eyes for another well-deserved nap. She missed a really pretty sunset.

Just after seven, I pulled off for our last destination, a reasonably new barbecue restaurant near the interstate called Stonewall’s. This is the first Georgia location, and seventh overall, for a small chain now based in Picayune, Mississippi. The business opened in 1995 in the town of Poplarville, about 25 miles north on I-59. They started franchising in 2007 and have opened three more stores in Mississippi and two in Louisiana. This location popped up towards the end of last year, and I heard about it when Amy on Food, one of my favorite Atlanta-area food bloggers, gave it a short but rave review last month. 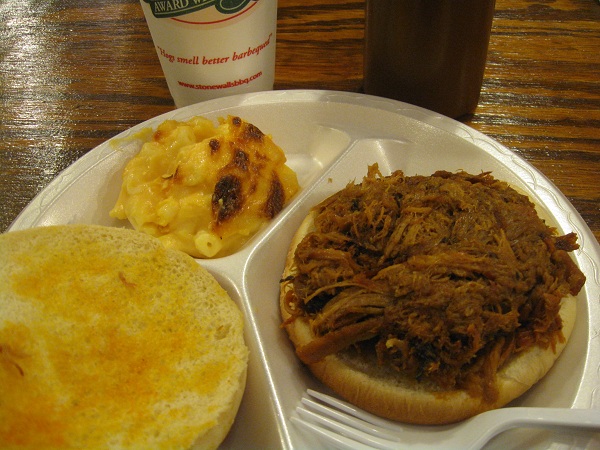 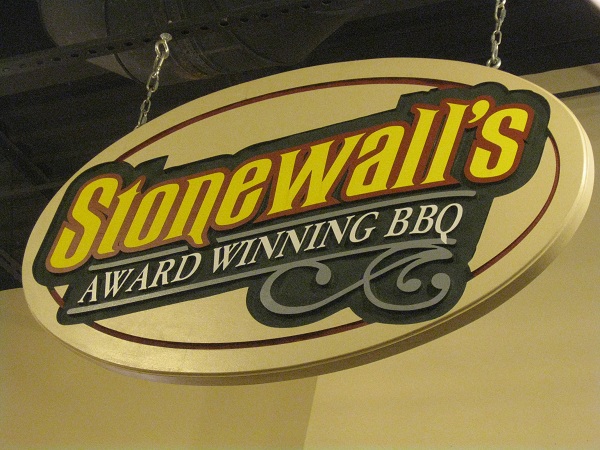 I’m afraid that I can’t be quite as enthusiastic as Amy was about this place, though it certainly was a pretty good little meal and I’m glad that we stopped to stretch our legs here. The barbecue was not at all bad, although I really did not like the very corporate look of the place. It aims for an old west look, and it succeeds about as well as the Lickskillet section at Six Flags Over Georgia. Guests walk through the dining area – picnic tables with benches, sadly, so this place isn’t friendly at all to customers with lower back pain – to order from trademark-heavy menu boards. The staff was incredibly upbeat and friendly on this Saturday evening, and the place was mostly full.

The barbecue was certainly quite good; in fact, I prefered it to the chopped pork that we enjoyed at Sconyers much earlier in the day. It had a really nice and heavy smoky taste to it. Marie again, claiming exhaustion, passed on enjoying a meal of her own. I ordered a sandwich packed with a very agreeable amount of meat, and a side of really good mac and cheese. The sauce is a basic, Memphis-style tomato-based sweet variety. It lacks a little flair, but that’s okay, because one of the fellows behind the counter brought around small samples of the store’s bread pudding for guests to try, and that dessert is absolutely packed with flair. Even if we’re not necessarily in the mood for barbecue on our way through Jackson County, stopping here for a dessert cup of bread pudding is a terrific idea for a snack.

The strip mall that houses Stonewall’s is also home to a consignment shop with what appeared to be a completely unpronouncable name. Thanks to an apparent accident at the sign company, the big letters out front clearly read “Rltzl Reruns.” We had fun trying to figure out what the heck kind of language that was, and how you said something like that. We rolled a sound that was sort of like “Rulltzull” around for several minutes before realizing from the actual print on the door that those large, lower-case Ls should have been lower-case Is, and the word was “Ritzi.” Okay, so maybe that wasn’t really all that humorous, but it had been 500 miles and change so far, and we still had to pick up the children from Smyrna and get home to Marietta. It was a long, glorious and wonderful day, and Marie’s probably going to punch me in the eye once we have this baby in May and I give it maybe two minutes before asking whether we can leave the tyke with somebody and get back on the road again.