Here is a restaurant that I remember well from back when it had an even sillier name. See, about three years ago, Achim Reus, who, before he became a restaurateur, was once the principal French horn player in the Stuttgart Philharmonic, decided that it was time to corporatize the restaurants that he’d been running since 1999 or 2000 or so. Back then, he had two in Athens and they were called Achim’s K-Bobs. There was one downtown and one by the track and the football practice fields and I really enjoyed them. They were proper, ramshackle restaurants for a college town and I ate at each of the two frequently.

In November of 2003, I took my still-quite-small children to Athens along with Matt on the day that Auburn came to town to get beat, 26-7. We didn’t have tickets and didn’t expect to find any; we just enjoyed the tailgating and the spectacle and the fun, and, looking for a place downtown with tables and televisions and a big crowd in red and black, we ended up at Achim’s and had a complete blast. I yelled myself hoarse after we intercepted on our one inch line with Auburn set to score and ran it all the way back. Oh, that was beautiful. Food was good, too.

I also remember an incident a few months later at the other Achim’s where my son, then seven, managed to lock himself in the restroom and his sister, then five, took advantage of my absence, trying to calm him down while somebody went looking for a key, and went rocking in her chair on the patio and fell backwards, conking her head on the cement. I thought for years that she avoided lasting injury; lately, though, I wonder. Anyway, with each kid completely terrified and bawling, I don’t know that I remember the food all that well on that visit. I was too busy watching out for a TV crew from America’s Worst Dads to drive past.

While I don’t know for certain that I stopped by Achim’s again after that low moment, I was aware that in early 2009, Achim remade and remodeled his restaurants into the franchise-friendly Keba Spitfire Grill. Now featuring flat and solid colors, big, easy-to-read menu boards and uniformed staff, what was once cluttered and unique now looks like the sort of place that’s ready to open in every town in America. There are two locations in Athens and one in nearby Watkinsville, and while I couldn’t confirm that any others are immediately in the offing, the company’s web site talks at length about their franchising plans. Loco’s Deli and Pub, Barberitos and Zaxby’s have all successfully expanded beyond the Athens area; perhaps Keba might be the fourth to do it. 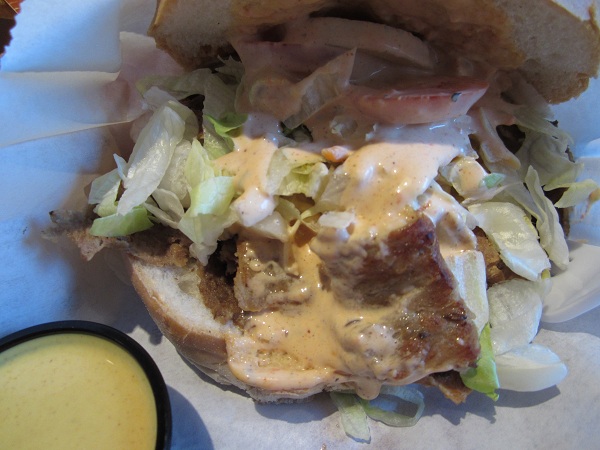 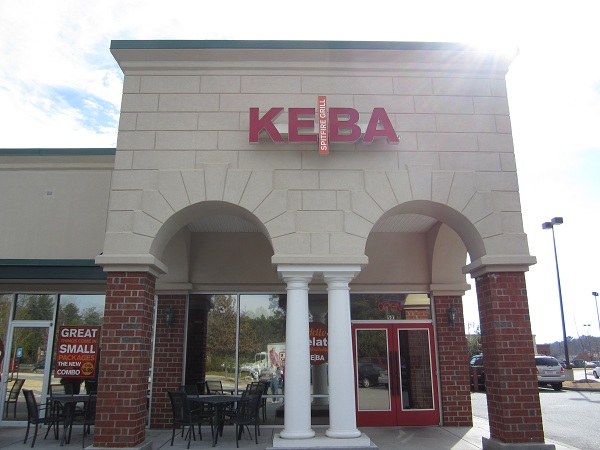 The main offering here are doner kebab sandwiches, prepared in the German style. That is, if you will, a similar product to what you see at a Great Wraps, but served on a freshly-baked hamburger bun, with lettuce, tomatoes and cucumbers and drowned in one of nine sauces. Most people go for the Keba sauce, which is basically tzatziki, but I had mine with the roasted red pepper sauce. You get your choice of meats, or a mix. I went with beef and pork and was incredibly pleased. This was a delicious sandwich. You can get them in wraps, or in a salad, but I definitely recommend the freshly-baked bun.

You’re definitely going to want fries with that. A high point since the Achim’s K-Bob days, these are big, freshly-cut incredibly tasty Belgian fries and each order comes with one of the nine sauces. I had the chipotle, and then decided I wanted to buy an extra cup of the curry sauce for them. This is one bit where the corporatization of the concept has hit a speed bump. If you go back up to the register for some, every single member of the staff fails to understand what they are supposed to do.

I never objected, back in the good old days, to giving the register a quarter and having the fellow working it get me a cup of sauce. Here, they’ve got to punch it in and make a production of it, and it costs fifty cents and not a quarter, and they charge tax, and they give you a receipt, and all the other kids behind the counter don’t understand why you’re standing there because the guy at the register can’t actually leave the register to squirt sauce into a cup, and so you stand there for a minute and a half while smiling teens are waiting for the fellows in the kitchen to finish slicing and prepping the previous customer’s sandwiches until you say, “Excuse me, my sandwich and fries are cooling; could one of you please just pump me the curry sauce that I just paid for?” Franchising has its consequences. It’s like how “zero tolerance” should not necessarily mean “zero common sense,” but it always seems to, because when you have a rigid system in place, nobody understands how to take initiative anymore.

In other words, it’s really good food, but nostalgia isn’t the only thing that made the experience a little better once upon a time.

I did a little shopping after that. I was with David, and he bought several more old records for his mighty collection of old vinyl. Before leaving town, I had planned to try one of the lauded burgers from Farm 255’s lunch cart while he was browsing at Low Yo-Yo, but the cart is, sadly, parked for the winter. I shall have to try again in the spring. That meant that my post-shopping visit was simply at the local branch of The Varsity. 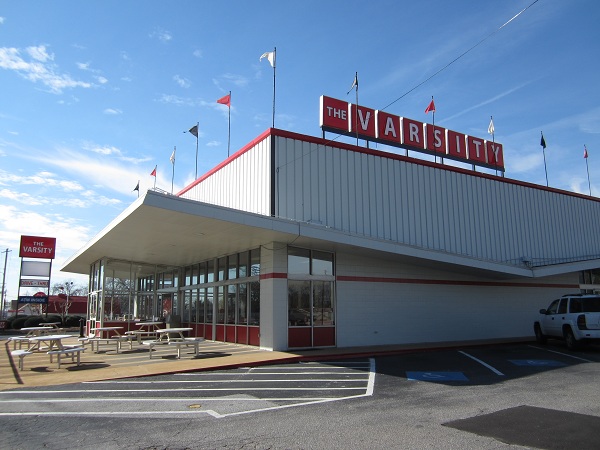 We’ve written about the Varsity’s Atlanta locations twice before in this blog. The Athens location is the most agreeable of the chain, of course, on account of all the red and black on display here. I seem to stop by on my way out of town maybe every third or fourth visit to Athens for a frosted orange and a last chance to stretch my legs before getting back to Atlanta. I was actually in the mood for a messy burger with pimento cheese, but I knew that those were on the agenda for Saturday at at least two places, so I passed on the grease and just had a wonderful F.O. It was, perhaps, not quite as satisfying as a burger might have been, or a pint of beer at The Globe, but it traveled a little better for the ninety-minute trip home.