In the previous chapter, I wrote that we took a quick trip to Athens. It wasn’t on the agenda, but Marie heard a feature on NPR about how Elf Power, one of my favorite bands (it is a very long list), would be playing at the annual AthFest downtown. We hadn’t been to AthFest in many years. I’m reasonably certain that the last time we were in attendance, those “goin’ to Hell” Westboro-wannabes that try to ruin Bele Chere in Asheville every year hadn’t heard about it yet, but they’re out in force now, being jerks.

So we joined the crowds and got a good place and made sure that the baby’s first concert was a great one. Even if lead singer Andrew Rieger mistakenly credited Gene Clark’s “I’ll Feel a Whole Lot Better” to Roger McGuinn, their cover of the song was tremendous. 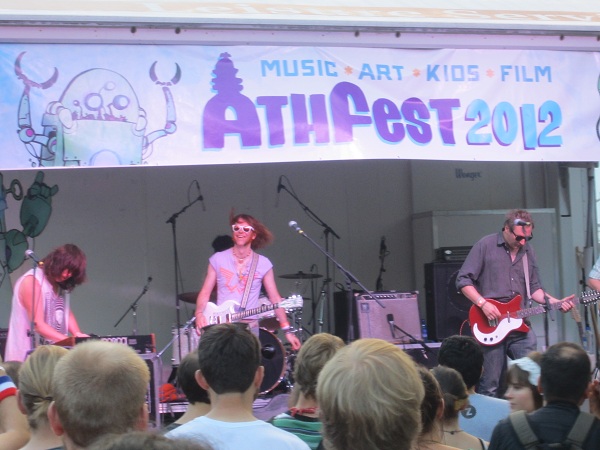 I had big ideas about visiting one or two more places in town after my quite small supper at Sisters – Marie enjoyed a larger meal there than I did – but we spent longer downtown than planned, and parked a comparatively long way off. Don’t tell anybody, but I have this secret parking place on campus that I’ve used for twenty-some years for free and it’s behind mumble mumble mumble.

Well, with a baby, it’s a bit of a hike from Washington Street, so we did not make it to either Hubee D’s or Mutt’s. Instead, we stopped downtown at the Ben & Jerry’s on College for some ice cream. Marie fondly remembers that good company supplying the canteen at Middlebury with free odd lot seconds when their creamery would fill a chocolate container with boysenberry or something. Athens is nowhere as lucky, although the University of Georgia’s own creamery used to mix up a chocolate milk so darn rich that I had to cut it with skim.

(The Creamery, incidentally, used to be a beloved treasure when I was in school, but according to a post from what sadly looks like another startup-and-got-bored blog called Classic City Eats and Treats, the darn place is selling Edy’s and Mayfield these days instead of their own milk and ice cream from UGA’s cows. Well, by thunder, when I was an undergraduate, those banana milkshakes came from mixing tanks in the room next door! I blame President Adams. For everything. That knucklehead.)

Anyway, Marie had a cone of chocolate and I had a Cherry Garcia milkshake, and we let the baby have a little taste of each. This was a very, very busy day for him, and, indeed, a very busy day for the Ben & Jerry store. They only had two people on duty and they weathered the crowd with good humor and excellent customer service. 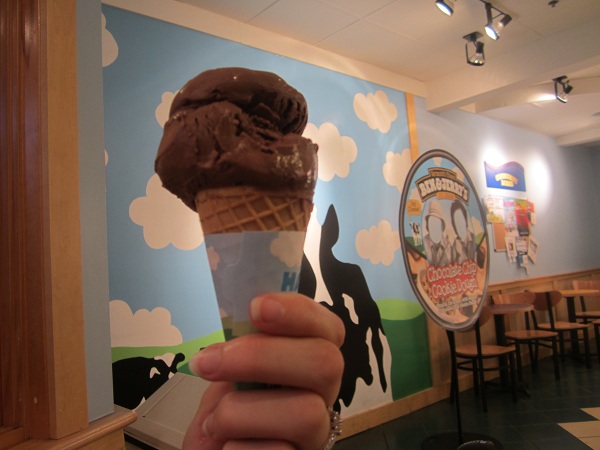 Honestly, though, a small side of étoufée for an early supper and a milkshake nearly four hours later left me still peckish, so once we finally finished hiking back to our secret campus parking place, I decided to swing by one of the three locations of Keba Spitfire Grill. I wrote about the one on the southeast side of town back in January. This one’s on the way out of Athens, in the midst of all those chains in Oconee County that have sprouted up around the Home Depot and the Kroger over the last decade or so. I think there’s a Five Guys and a Barberito’s and there used to be the only Fire Mountain restaurant I think I’ve ever seen over here, but it’s something else now, an Outback or such, or maybe they just turned it into another Ryan’s. 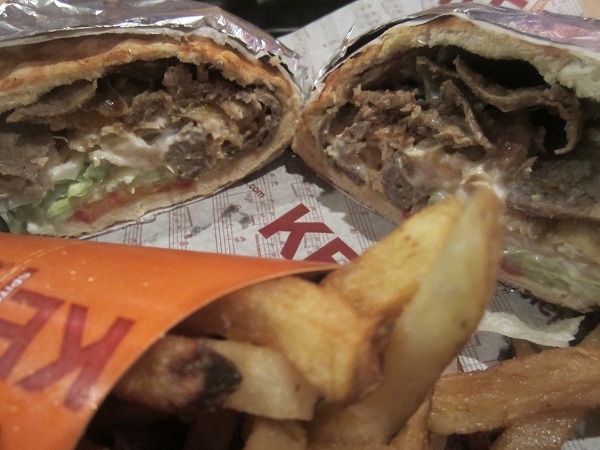 Keba still isn’t getting very much press or attention from anybody, and they haven’t expanded outside Athens despite all the corporate look and redesign that I mentioned in the earlier chapter. I preferred their look and feel before they started looking for franchise investments, but the food is still as good as it was fourteen or fifteen years back. You can tell that the business would like to follow Locos Deli and Barberito’s and Zaxby’s, which came to Athens by way of Statesboro, into becoming a big regional chain instead of just a local one, but right now it’s still just a local curiosity.

I was, in the end, a little less hungry than I thought that I was, and so I wrapped up half of the sandwich for lunch the next day. The thinly-sliced and flavorful meat kept very nicely, although I did have to give up some of their wonderful and tasty fries, because those are only good fresh and warm. Keba is really not on anybody’s radar, and I doubt many visitors to Athens are going to have it on their itinerary over all the city’s other, wonderful restaurants, but they really do a fine job with European kebab-style sandwiches here, and if you find yourself in the Epps Bridge area between 9.30 and 10, you can certainly squeeze in for a quick bite to eat before getting on the road back to Atlanta.

Marie was a real sweetheart and drove home. That was awfully thoughtful of her. The baby and I were really tired.