When Marie and I first began dating, we would probably most often eat in Athens at the restaurant that was nearest her house: the original location of Jot Em Down. The building was erected in the 1920s and, once upon a time, had been a small grocery store. Jot Em Down, for a time much beloved as the favorite barbecue in Athens of many writers, moved to the larger space on the old Macon Highway that had been the home of Parsons Restaurant, but it only lasted there a year or two.

Unable to keep costs low or effectively use the big space, sprawling through several rooms, to its advantage, Jot Em Down’s weird, homey appeal seemed lost inside the comparative barn of a building, and I’m certain many of their customers just never followed them over there. Sadly, when they closed, they’d already been forgotten in favor of the newer, more popular Harry’s Pig Shop and Butt Hutt. Now, Butt Hutt has itself moved into the Parsons space, but they made the move from a crummy space on Baxter that everybody wanted them to leave. Big difference!

Nobody wanted Jot Em Down to leave the old store on Whitehall. Everybody loved the ramshackle place with all its character too much for them to depart. That’s one reason that I’m pleased the space has been taken by Sisters Creole Market. It’s owned by three sisters from New Orleans, Lenore Bramblett, Ann Silberman and Carla Waggoner. Lenore, wife of the musician Randall Bramblett, has lived in Athens for more than twenty years. Her sisters joined her in town because they wanted to cook together and they wanted to own a business together, as they once had in New Orleans in the 1980s. 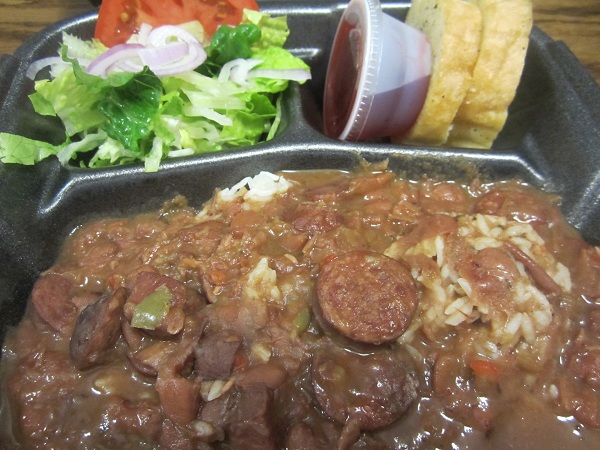 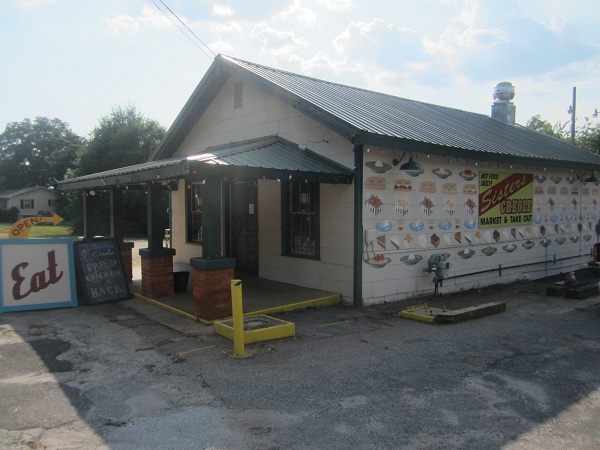 We took the baby to Athens a couple of Saturdays ago to visit Marie’s friend Eleanor and her family, including a baby a few days younger than ours. It’s always neat to compare the respective developments of babies. Theirs is throwing, or, more accurately, developing a Glavine-caliber fastball, which ours, mercifully, has not figured out yet.

After a few hours of letting the babies tell us what’s what, we decamped for Sisters, which, again, would have been the closest restaurant to us had we moved to Athens and in with Marie instead of her coming to Marietta. Sometimes I wonder whether we made the right choice there, especially since the closest restaurant to us now is a Captain D’s, and we’ve got to drive a good deal further to find anything this unique and fun.

Sisters is a restaurant best experienced at lunch, before they sell out of all of their specials. Since they opened in March, business has been beating their estimates, and, when we arrived for an early supper, two of their three specials were gone. What remained, from their regular menu, was still really good. Carla was there this evening, and she let us know that she believed the difference between “Cajun” and “Creole” cooking is that Creole refers to traditional New Orleans cooking, and it is probably not as hot and spicy as Cajun, which refers to more country dishes. They cook all sorts of traditional things here, from the red beans and rice that Marie enjoyed to beet salad and a flavorful, mild shrimp étouffée.

They use the space pretty well here, but, as a principally take-away joint, there is very little room for guests to stretch out and eat, and no highchairs. From the pictures at On the Road Again’s blog post (see below), they had a table or two, but now there’s a grocery shelf for people who want to take home some Zatarain’s or some Slap Yo Mama spice. Travelers might end up eating on their car’s dashboard, meaning you’d best wait until after this heat wave passes before making your way to Athens for some really good home cooking. It’s good to see this wonderful space in such good hands.

(Update, 11/7/12: Unfortunately, Sisters closed on November 3. From their Facebook page, it looks like they were having a conflict with the county about indoor seating and were unable to find a replacement space.)