In the 1960s, a guy named Wink Wasler operated a small chain of restaurants in this stretch of the state between Charlotte and Greensboro called Wink’s Barbecue and Seafood. I understand that there were maybe six of them, but today only this one remains, the name slightly rejigged to reflect the lion logo that appears on the restaurant’s signage.

I pulled in about 12.45 to a three-quarters full barn of a restaurant. Like many that I’d visit on this trip, this is a big-menu joint that starts with barbecue and tries to accommodate every possible taste at the table, just in case somebody brings a family member along who doesn’t like barbecue or something. I don’t see much in the world of reviews about the seafood at Wink’s, but people do enjoy their breakfasts, their hamburgers, and especially their barbecue. I ordered a sandwich and a basket of hushpuppies. The sandwich, as is common in the area, comes with slaw. Apparently, they’ll give you red slaw should you order a tray, but white mayo-based slaw if you get a sandwich. 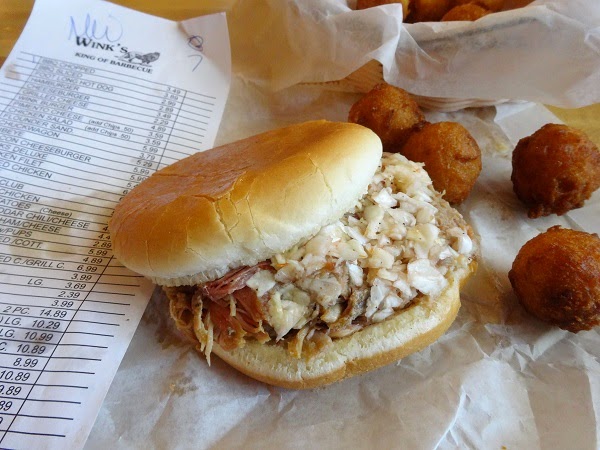 Now, for ages, I’ve read people online try to describe Lexington-style barbecue sauce and completely fail to get their point across. I have often seen it described as a vinegar-based sauce, with a little tomato or ketchup and pepper. That’s completely unhelpful, as it describes about a third of the barbecue sauces in Georgia. Ours, however, are typically mixed thicker and have more tomato. You might say that a Georgia red sauce is a tomato-based sauce with a little vinegar, and a Lexington sauce is a vinegar-based sauce with a little tomato. Here, for people like me who had never previously had the pleasure, Lexington sauce looks like this: 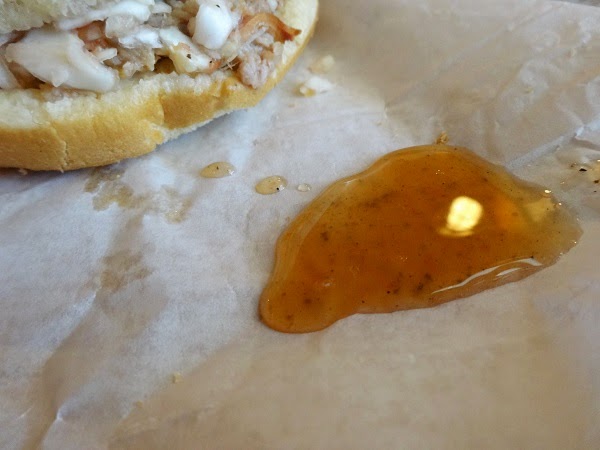 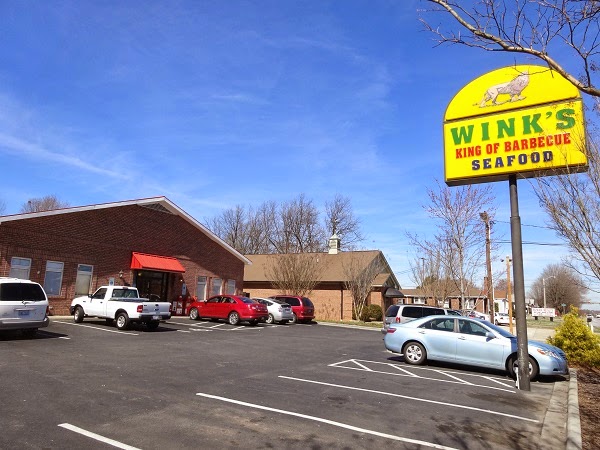 I must assume that I came on a bad day, because despite all the celebrations and love for this restaurant, I found this to be quite underwhelming. The meat didn’t taste particularly smoky, nor, for that matter, like particularly anything. It wasn’t at all offensive, just so bland that it felt like they didn’t want to risk troubling anybody who came in for shrimp or some meat loaf and ordered this by mistake. There’s another joint in town called Richard’s that I’ll see about trying the next time I’m in town. I’ll give Wink’s another go sometime down the line.

Other blog posts about Wink’s King of Barbecue:

7 thoughts on “Wink’s King of Barbecue and Seafood, Salisbury NC”