As I drove toward Lexington, home of the legendary Lexington Barbecue, I had a feeling that, even with an early afternoon arrival, I’d find a pretty good crowd. Yet I was still quite surprised to find their lot much more than full. I parked along with ten or eleven other cars on the side of the road beneath the lot and began trudging up the hill. This place was more popular than I imagined! Or, well, you know, they may have let their regulars know that today would be a good day to be on TV: 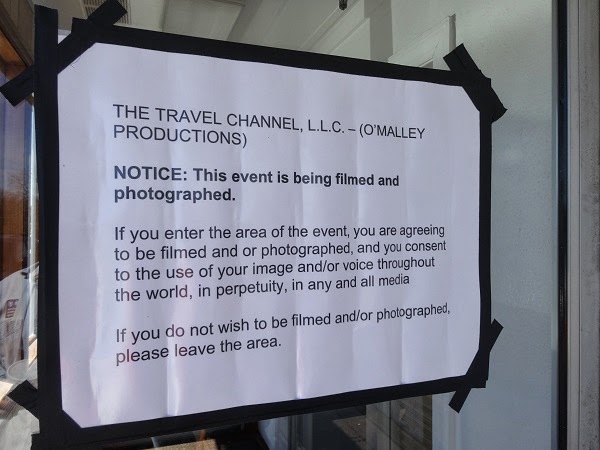 Oh! No wonder there was such a mob!

Interestingly, when a TV crew comes in to do a feature about a restaurant, one thing they do is cover up all the visible logos with colored tape so that they don’t inadvertently provide some free product placement. So the boxes of York Peppermint Patties by the register had black bars across the front, and the Coke machine – which has Cheerwine in the fountain – had red all over the sides and black all over the logo heads. On our January trip to South Carolina, we noted that every single restaurant we visited served Pepsi instead of Coke. This trip saw Pepsi outnumbering their rival two to one across all the restaurants I visited. Anybody who thinks that all Southerners prefer Coke has clearly never paid attention to the Carolinas. 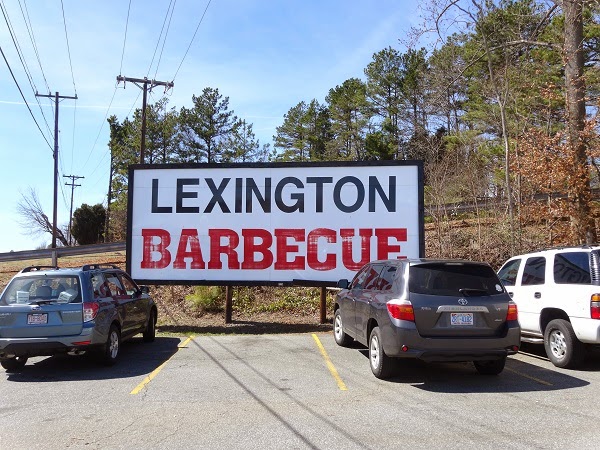 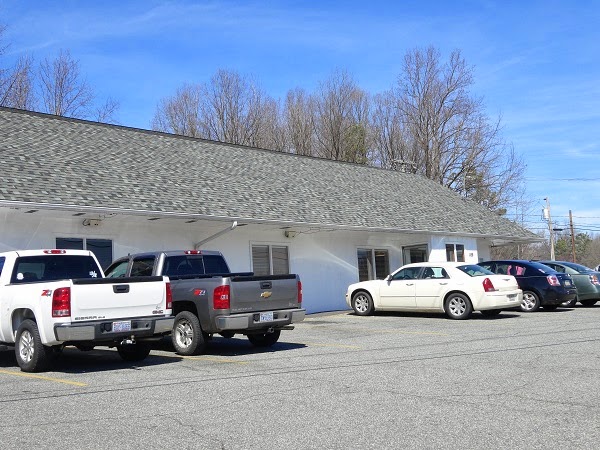 Anyway, with more than a half-hour wait for a table, I joined the much shorter line for carry-out so that I could eat in my car. The staff was almost overwhelmed by the mob, but everybody was in great spirits and working more efficiently than many places I’ve visited lately under big pressure. Nobody who worked there was really free to answer a couple of questions from me, but a couple of the locals spoke very highly of Wayne Monk’s operation. He has been at this location, which is often referred to as either “Lexington # 1” or “Monk’s Place,” since 1962, and while his sons run most of the day-to-day business, he’s still very involved and very passionate about barbecue. I understand that he principally smokes shoulders over oak, while most of his peers in the region who still use wood prefer hickory.

I asked for a sandwich with the slaw on the side and took it back to my car. There, I shot the very worst photographs ever taken of anything, ever, and resolved, after looking at this ugly thing on my knee, henceforth to always place the food on the dashboard if I must eat in my car. Good grief. This food was too good to be represented here with such an awful picture. 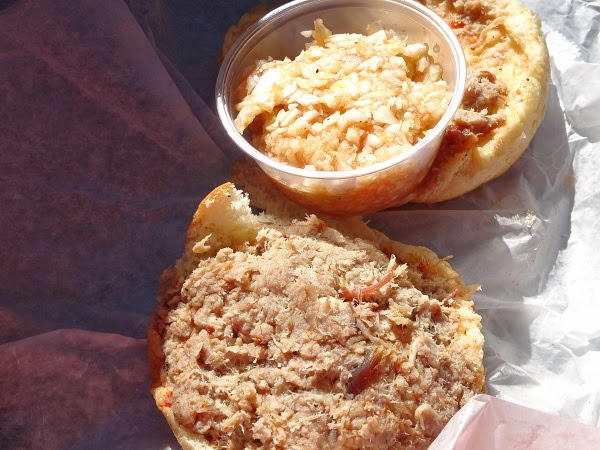 Never mind the picture, this was quite a good sandwich! When I remember to order it correctly on my first visit to a restaurant, and as I failed at Wink’s about forty minutes earlier, I like to get the slaw on the side so that I can have a few bites of the meat and the topping separately to see how they taste, and then combine them. This is very tender and smoky meat, with a gentle flavor, not too rich. Unfortunately, I wasn’t about to add additional sauce in my car and risk a mess, so I had to dip forkfuls into the cup of sauce that they provided. As with Wink’s, this was thinner than the sauce at Bridges Barbecue Lodge, and not as dark. It was very tangy and mixed with the meat perfectly.

I work under the assumption that no restaurant’s staff can honestly be at their best when they’re under as much pressure as was evident on this trip, but they seemed to perform flawlessly and my sandwich was very good. If they can put out such a good product in the middle of chaos, I imagine that on a quieter day, they’re downright magical.

Other blog posts about Lexington Barbecue: