Here’s another silly reason why this circumnavigation was unlike the three previous ones. On those outings, the best meal of the trip – the life-affirming, revealing, “this is better than I was expecting” visit to a legendary old place – came halfway through the jaunt, roughly at the furthest point from Atlanta. Those were Brick Pit in Mobile, Scott’s BBQ in Hemingway, and Brooks Barbecue in Muscle Shoals. However, the high point this time out came at my fourth stop, Lexington’s Bar-B-Q Center. This was an astonishing little meal.

I should clarify here that the three different spellings of one word – slash – term in a single paragraph are deliberate. It’s policy here to always spell the name of a restaurant as it appears on the business’s main public sign. In the case of this particular restaurant, there’s extra confusion, as it is almost always written as “Barbecue Center.” “Bar-B-Q Center” is how it appears on the sign, however. I think it’s possible that the shorter spelling was only done for the sign because the original restaurant in this building was an ice cream shop called Dairy Center, and new paint and neon were installed in 1967. That’s when the late Sonny Conrad took over the business, twelve years after his brother-in-law first opened it in 1955. Sonny had first worked here in the early 1960s, and later apprenticed with Warner Stamey, one of the legendary figures of this region’s food culture. 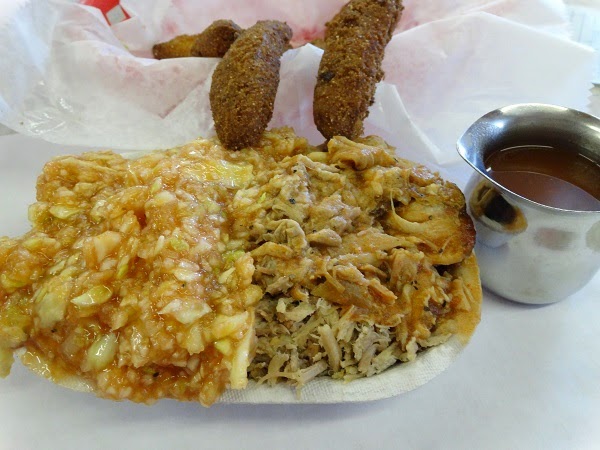 Mr. Conrad passed away last year, leaving the restaurant to his sons Michael and Cecil. In his time, he was an integral part of the Lexington community announcing to the world that their home is the world’s capital of barbecue. In 1984, he was one of six local restaurant owners to sign on to the inaugural Lexington Barbecue Festival. Posters of previous events are framed all around the terrific, throwback diner interior, and it is still going strong. The festival is now in its 31st year, and brings more than 150,000 guests to Lexington every October. 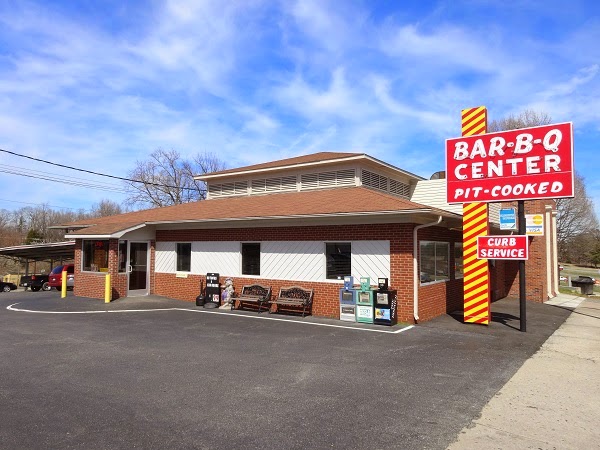 I had some very good meals on this trip, including one in a restaurant that I’ll get to in about a week and a half that might also be in my personal top ten, but the pork and the slaw here were just out of this world. I absolutely loved the pickly crunch in the slaw, and would have happily eaten an entire bucket of the stuff.

And as for the meat… well, there are a few words that we’ve informally banned from our blog, because overuse kills their effectiveness. That’s why we haven’t used the word “decadent” to describe a dessert anytime in the last three years. “Mouthwatering” is another one, but darned if I can think of a better one in this case. In a different, crueler, but nevertheless very happy alternate world, you could have given me a single bite of this tender, perfectly smoked pork and I’d have sat there drooling for the better part of the day, wondering whether I’d get a second.

This is absolutely some of the best food I’ve ever had. 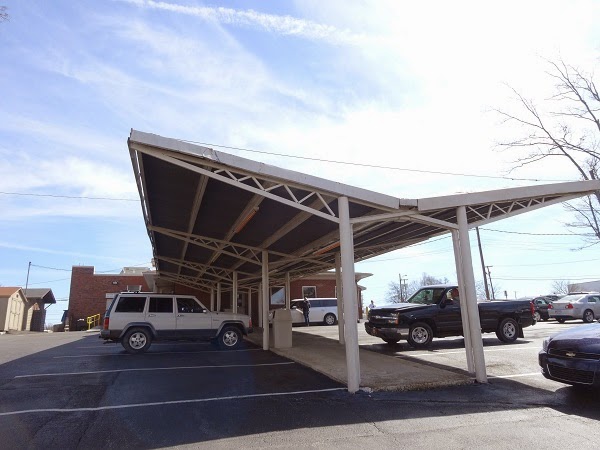 One of my fellow diners noticed me snapping pictures inside, and followed me out, where I was shooting the front, and the curb service canopy out back. She told me that she lives on South Carolina’s coast and frequently comes this way to visit one of her children in Winston-Salem. She stops here for a meal every time. Boy, can I ever get behind that. I loved this place completely and hope to stop in again someday.

Other blog posts about Bar-B-Q Center: