Last year, when we published our mammoth, photo-packed story about what’s left of the Shrimp Boats chain, it first went out without a photo of the Durham Shrimp Boats. It is one of seven survivors of that once 95-strong chain, and one of only two in a 1969-style building. I had intended then to make it to Durham on this trip to North Carolina to visit the restaurant, and was pleasantly surprised when one of our readers in the area, Erin Parr, volunteered to go take some pictures for me. We have, it’s been noted, the best readers in all of blogdom. Y’all are the best.

But there’s no substitute for actually visiting in person! So I made my way 87 miles east from Lexington, in no particular hurry as I’d already had four small meals and very little exercise. Along the way, I listened to the quite wonderful WKNC 88.1 FM, the student station of North Carolina State. They played some really great music before sitting down for a lengthy interview with an electronic artist. When I finished my visit to Shrimp Boats, they were still talking and so I didn’t hear quite as much new music as I’d hoped.

Like an utter dunce, I didn’t take the opportunity to switch over to the Chapel Hill student station which I’d first read about decades ago, and which, it turns out, is actually WXYC 89.3. See, I sort of thought that was the station that I was listening to. 88.1 is the frequency of Clemson’s astonishingly good WSBF. I’d switched over to my iPod hours previously when I lost that station’s signal, switched back over to the radio as I approached the Research Triangle, assumed the music on 88.1 was Chapel Hill, and never gave myself the chance to listen to it. I suppose I’m going to have to just go back to the Triangle for a longer visit one day, and listen at length to both stations! (Yes, I know that I can stream. Not the same as driving and listening. At all. Hush.)

Anyway, onto Shrimp Boats. Despite the implication that good seafood is what somebody should get at a place named Shrimp Boats, their signature dish is actually a chicken sandwich. It’s not a simple boneless fillet. They do some very good fried chicken, much better than average, and then chop it up, serving it on a sesame seed bun with lettuce, tomato, and mayo. It is, in all honesty, an excellent sandwich, with really juicy and flavorful chicken. 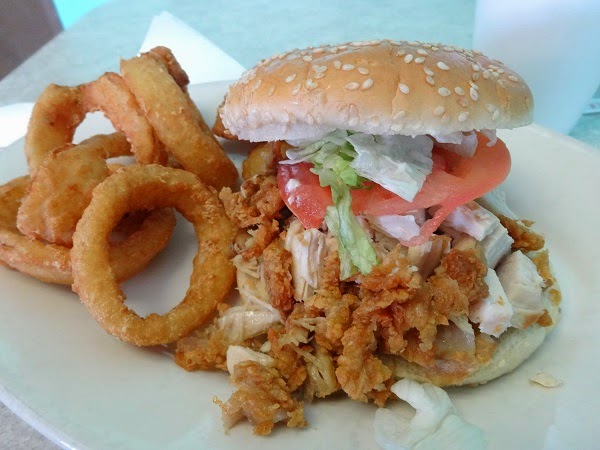 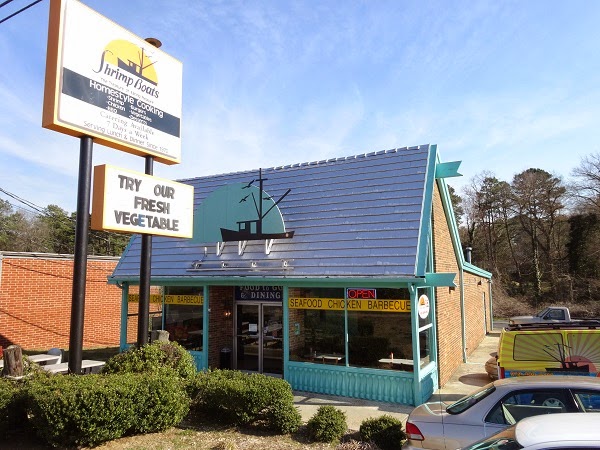 This Shrimp Boats was built in 1970. The original owner was John Workman, and he sold the business in 1997 to two of his employees, Nancy Norwood and her husband Mohammed Yousef. Unfortunately, I missed them on this trip – the manager on duty told me that Nancy leaves each afternoon following the lunch rush to pick up her children – which was a shame, as I love to hear and collect all the stories about Shrimp Boats that people can stand to share. The four people on duty were taking care of quite a few carry-out orders on this Friday afternoon. Seafood, here, has become one of many things on a more general meat-and-three menu, with lots of fresh vegetable options.

(On a weekend as generally unhealthy as one of these can be, I absolutely should have availed myself of some vegetables that were at least a little better for me than onion rings. Between this and the radio, clearly, I entered the Triangle wearing my senseless hat.) 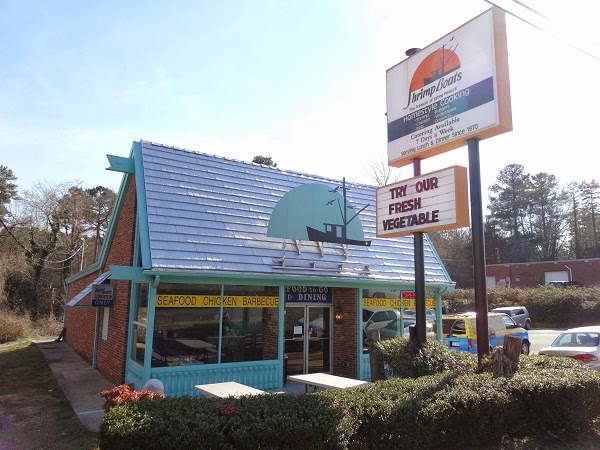 I did not see very much of Durham – I only went this far east in the first place to come to Shrimp Boats, though I did justify it with some barbecue in Chapel Hill, as we’ll see in the next chapter – but it’s in exactly the part of town that I expected to find it. This was a pretty busy commercial strip forty years ago, with a movie theater across the street which is now home to an office park. Today, there’s some decay and sad sprawl, but the road’s in better shape than some of the corridors where Shrimp Boats had once docked around Atlanta. (See last week’s photo post about South Cobb Drive, for instance.) The food is very good, and it’s downright nice to step back in time, to a restaurant that was part of a really neat chain for five years, and a proud, awesome independent for four decades.