When I began researching the lost Shrimp Boats chain, my curiosity was principally driven by a interest in the 1969-74 era buildings, and the initial story in this series (links below) was built around that. If you read that story, you’ll see that in the fourth paragraph, I quickly summarized the four locations in the vicinity of Charlotte (misidentifying the Lancaster store as in Springdale) and moved on to pictures of the buildings.

It wasn’t until the road took me to Gastonia last spring and I stopped to get some backstory that I realized that I was really doing myself and anybody curious about Shrimp Boats a disservice by not going to the South Carolina survivors, even if none of them were in the buildings that I find most interesting. Although, for a couple of minutes after we arrived at the Lancaster location, I got a little excited about what could have been. This business opened in the mid-1960s, but has only been at its present spot for a little more than ten years. They moved away from the original location, on US-521, and it is presently home to a restaurant called Wing King Cafe.

My phone is old and cranky and going online takes forever, so it took a few minutes for my hopes to be dashed. No, Wing King Cafe is not in a 1969-74 building, just a nondescript restaurant that doesn’t have any design interest. The Shrimp Boat of Lancaster doesn’t have the connection that I’d like, but they have some pretty good fried chicken. 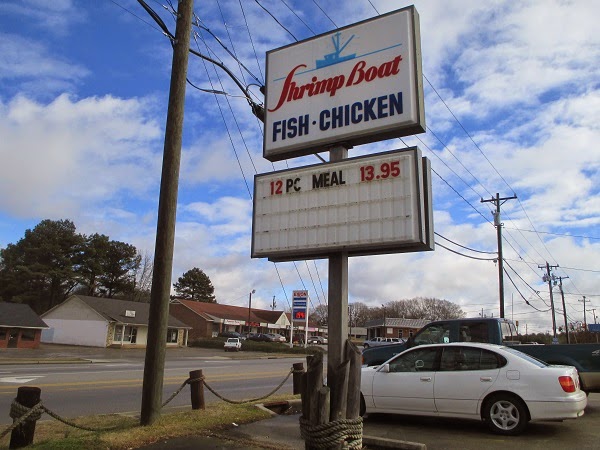 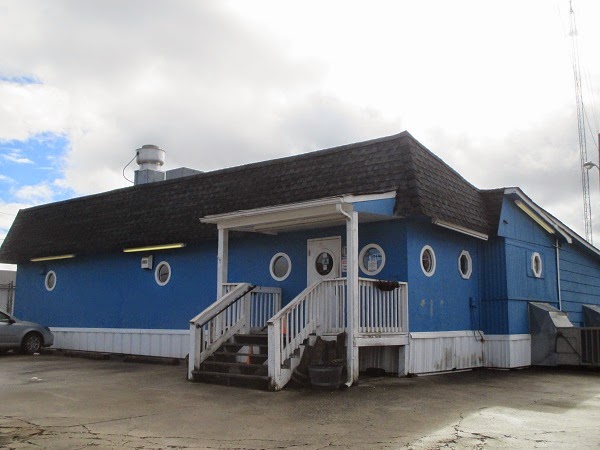 There are seven Shrimp Boat restaurants left, and while they each do their own thing – well, six of them do, more on that next time – all of them emphasize the quality of their fried chicken over their seafood. While the girlchild napped in the car, the rest of us shared a three-piece dark meat snack with fries and slaw and learned a couple of things about the business. They’ve been independent since 1974, and gave this building the expected “nautical” theme, with porthole windows and shelves full of twelve-inch schooners that tempt three year-olds into touching them more than they should. 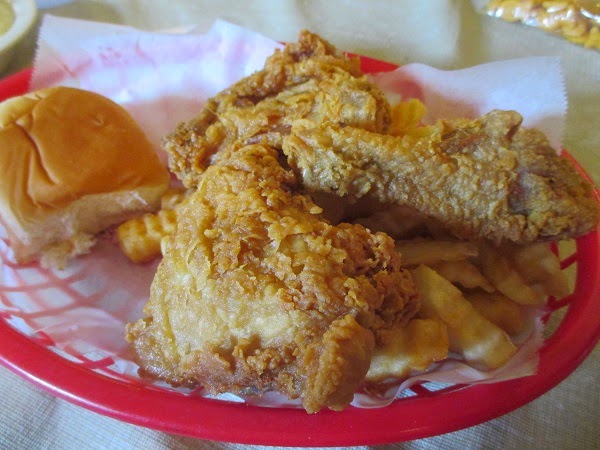 The signage out front reads Shrimp Boat, singular, while using the typeface and the image of the 1969 Shrimp Boats, plural. We’ve seen this before, at the Gastonia store, and what I’ve hypothesized is that around the time that the corporation in Macon formally filed for the “Shrimp Boats” trademark, they created singular signage for all of the existing stores, so that they could keep their original name but look like the new brand. I know quite well that this flies firmly in the face of every contemporary marketing rule about branding and identity, but (a) things were done a little differently in the sixties, and (b) that’s the only explanation that makes any sense. As always, I welcome additional information and corrections.

So anyway, the chicken was pretty good. If you find yourself in Lancaster for whatever reason and don’t get some of the local barbecue – Jo Jo’s and Whistling Pig would have been on the radar if we were not looking for Shrimp Boats – then the fried chicken here isn’t bad. I wish they’d have let us add a piece of fish or a couple of shrimp for another dollar or so, but they don’t have those options on the menu. The service is good and the people, employed by the Jenkins family who own the place, are incredibly friendly, and they’ve been a part of the community for more than forty years. Hats off to ’em!

In addition to this being another installment of our Shrimp Boats series, this chapter, our 1141st, is published on our fifth anniversary of blogging. That’s right, Marie, Let’s Eat! is five years old today. Happy birthday to us, and here’s to many more!