Longtime readers may recall that, every January, Marie and I take a day trip into the Carolinas. It’s never a very long one, and it usually leaves me complaining about getting to the last place or two long after dark, but it’s become a tradition. I wonder, if we ever do move to Asheville, whether we’ll start a new tradition and go somewhere else every January instead.

Well, this time out, I wanted to spend a few more minutes in Charlotte and the area around Rock Hill, finishing up one little area of research and history that’s been calling my name for years now. More about that in the next chapter. Charlotte is a little over four hours from our house, so to arrive at a restaurant as it opens for lunch at 11 means kicking everybody out of bed before six to get ’em moving to the breakfast table and then to the car. At that point, half of our party went back to sleep while the boychild and I yammered and I told him oddball stories and sang him songs. His teenage sister slept like a champion. Even when we stopped at an Abbot Farms store near Cowpens SC for a bottle of Blenheim and a Baby Mercy Break, she couldn’t be roused.

A couple of minutes after eleven, we pulled into our first destination, the original location of Mac’s Speed Shop. We picked it because it has a little reputation and notoriety as a barbecue joint, but it’s really become more of a barbecue-ish joint, if you will. It’s a family-friendly biker-themed bar and grill that seems to emphasize barbecue as their main food item, but guests could easily come here, admire some of the motorcycles parked under the canopy outside, watch some sports on TV, flirt with the waitresses, drink lots of beer from a deep, deep menu full of local craft brews, and leave, hours later, having no idea that barbecue was even on the menu. Sure, plenty of older barbecue joints will serve burgers and seafood, but this place makes a killing on, well, turkey wraps and quesadillas, like a locally-owned Applebee’s with David Allen Coe lyrics on the walls. 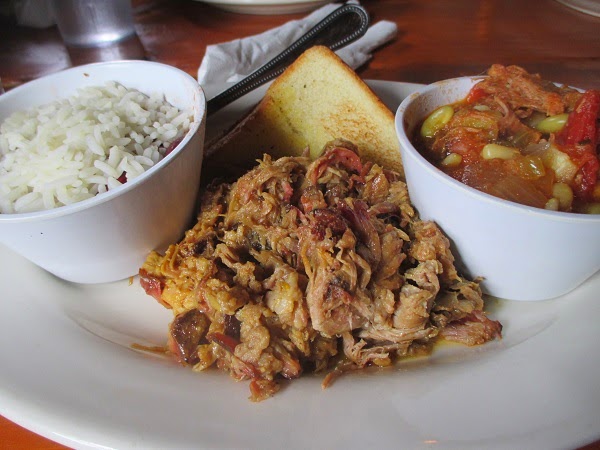 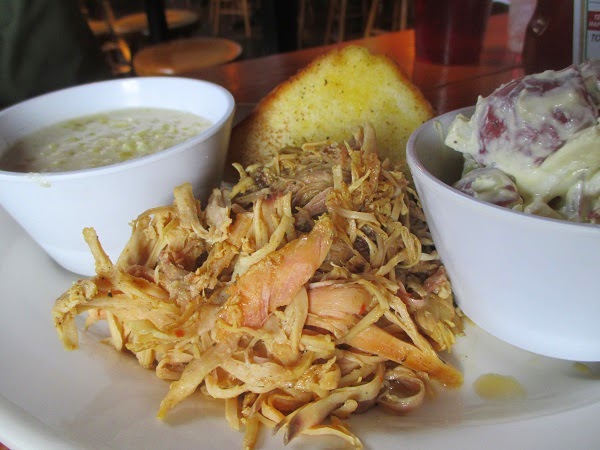 The first Mac’s Speed Shop opened in 2005, and they’ve expanded to five locations. Three are in the Charlotte area, one is in Fayetteville, and another is in Greenville SC. The barbecue is pretty good, but not a real standout. I ordered pulled pork, Marie had the pulled turkey, and the kids had pork sandwiches. The disappointment is that, as we see in middle Georgia, the meat is smoked and then left to simmer in one of the sauces. They offer four: there’s a dark vinegar sauce which I probably would have enjoyed on dry meat. Then there’s a Georgia – slash – Tennessee-styled red sauce and there’s a classic yellow South Carolina mustard sauce. Then, bizarrely, there’s an orange “Carolina BBQ Sauce,” which seems to be what happens when they mix the red and the yellow half and half, and that’s what they simmer the meat in.

So yeah, it was pretty good overall. We visited three barbecue joints in the Charlotte area on this trip, and this ranked second place with us. There’s better barbecue in the Queen City and its suburbs, and there is worse. 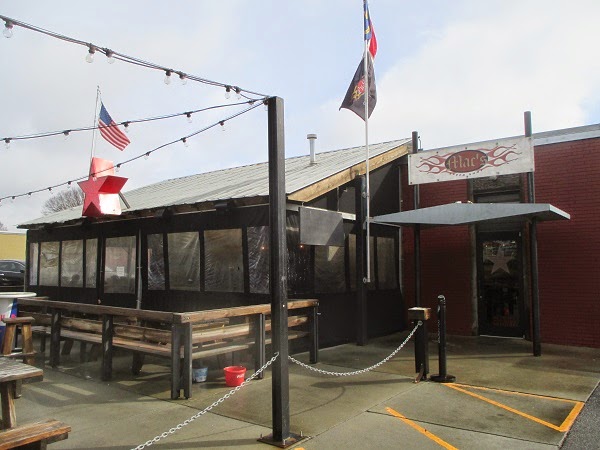 Mac’s offers a really long list of sides. The only disappointment was the Brunswick stew, which was a piping hot bowl of potato-loaded vegetables with a little bit of meat in it. If they cut out the potatoes for some chicken, they might be onto something. Much, much better was the creamed corn, which Marie and our son loved, and the potato salad. I went with red beans and rice, which I like to see as a side at barbecue restaurants, and our daughter picked mac and cheese, and, like the heretic she is, then complained that it was too cheesy.

We got back in the car and the cheese-packed girlchild closed her eyes again for the next thirty minutes as we drove back into South Carolina, asked to be left alone at the next restaurant, and the next one, and finally got up again at 2.45. How that kid does it I have no idea.