My final stop on the first day of this road trip was at Wilber’s Barbecue, an incredibly popular place on US-70 in Goldsboro that has been packing in locals and tourists for more than fifty years. In the 1950s, this building had been the home of a popular joint called Hill’s Barbecue, but Wilber Shirley bought it in 1962. It was briefly called Highway 70 BBQ, catching all of the crowds of tourists heading east for the beaches (70 appears to be one of four principal routes from the center of the state to North Carolina’s gigantic coast), but when Wilber’s partner sold his share, the name was changed and it has been packing them in like only a handful of other barbecue places in my experience. Even on a chilly November Friday night at half past seven, there were only about five spaces left in the lot and the table I got appeared to be the only free one in the restaurant.

As mentioned in the previous chapters, the tradition in eastern North Carolina is to smoke the whole hog. Many places, however, don’t quite serve the entire hog; as the meat is chopped, many kitchens will separate the fat and the gristle. That may be why, when newsman Charles Kuralt visited Carolina Bar-B-Q 200 miles west in Statesville, he complained that the barbecue was too lean. That is absolutely not a problem at Wilber’s. They smoke the whole hog and they serve the whole hog. 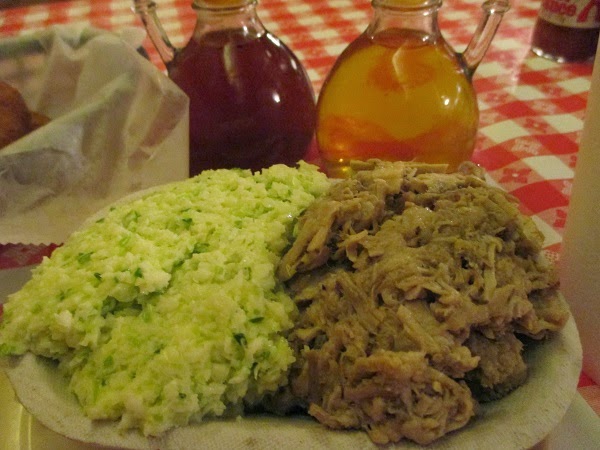 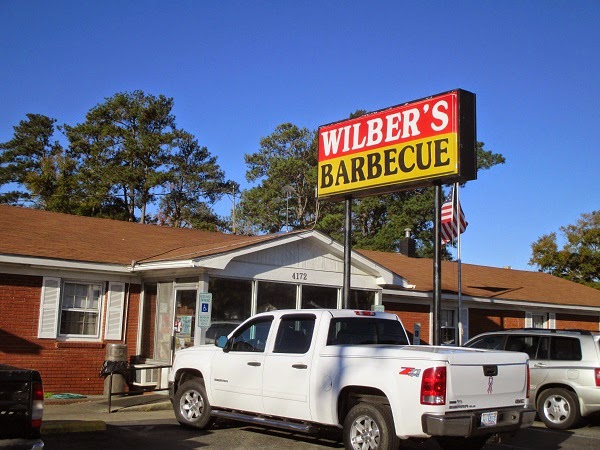 I think that it’s just the luck of the tray how much fat and gristle a guest might get, and it was my bad luck that my tray had considerably more than I have ever had in an order of barbecue before. I certainly wouldn’t hold it against this place, because the flavor of the meat is truly fantastic. This is really good stuff, moist and a little peppery. With just a tiny amount of sauce added, this is a terrific meal, and it lives up to the hype. Wilber’s has been one of the legends of North Carolina barbecue ever since food lovers started ranking places, and deservedly so. With a sweet, mayo-based, vinegary cole slaw on the side, it’s a terrific meal any time of day. After all, if you’re heading to Atlantic Beach from somewhere inland, you could well be coming by any time of day.

That said, I was quite alarmed to read the 2007 report from Serious Eats (linked below) suggesting that Wilber’s time as a destination for wood-smoked barbecue must be numbered. Apparently, the city of Goldsboro grandfathered this restaurant into an ordinance banning wood smoking, but that’s only good through Wilber’s life. When he passes – and he’s in his eighties now – the restaurant will have to convert to gas cooking. That’s awful. I hope that’s been rescinded. Whatever is to become of Wilber’s Barbecue after its owner passes away – and we hope that he lives to 206, at least – it should be allowed to continue preparing the food in the way that has made it so beloved. Does anybody know more about this ordinance? 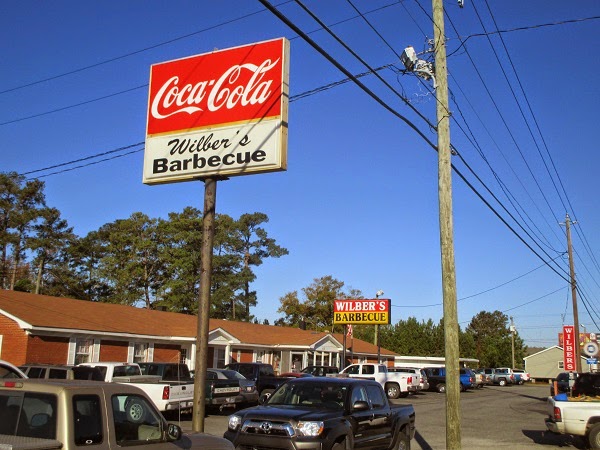 So I arrived after sunset, but my hotel was just a couple of miles away. I came back by the following morning to take some photos of the building in the daylight, and again had to fight to find a parking place, because Wilber’s serves a breakfast that is also crazy popular. I noticed then that Wilber’s is a Coke business. I tend to drink water at restaurants, or occasionally sweet tea, unless the restaurant only has a drinks cooler and doesn’t offer water, so it doesn’t matter a huge amount to me, but after several trips to the Palmetto and Tarheel states, I can’t help but notice that locally-owned restaurants in the Carolinas that serve Pepsi outnumber the ones that serve Coke at least two to one, and probably more. I’m acquainted with two or three Georgians who get uppity at the sight of Pepsi in restaurants. We’d best offer them a fainting couch before visiting the next three stops on my tour.

Other blog posts about Wilber’s Barbecue: