One thing set this circumnavigation apart from the previous four that I’ve undertaken, and turned the event into more of a zig-zag than a proper loop: some of these restaurants close very early. After I read a short review of Bum’s in Ayden NC from a contributor at roadfood.com, I really wanted to visit, but it closes at the disagreeable hour of seven on Friday evenings. So I left Farmville after my really memorable meal at Jack Cobb & Son and went southeast to Ayden to catch a meal there before taking the long drive back southwest to Goldsboro, which is where both my hotel, and a restaurant that stays open to the more sensible hour of nine, would be waiting for me.

That said, all of this farmland in eastern North Carolina was absolutely gorgeous with the leaves turning orange and red, and gigantic huge equipment to see in the cotton fields, so it wasn’t like I objected to the drive at all.

If I may indulge in sharing a first world problem, one major downside to these little expeditions of gluttony is that I do not have the time or the room in my stomach to really dig into a place like Bum’s, which came onto my radar because of its wood-smoked barbecue but really needs to be savored at length, with at least one friend and ordering a whole pile of vegetables and certainly their celebrated fried chicken. This was a barbecue trip, and, surprisingly, I wasn’t taken with it here. But the more that I thought about it after I left, I decided I want to come back one day and give everything else here a try. At lunch, not at the end of the day. 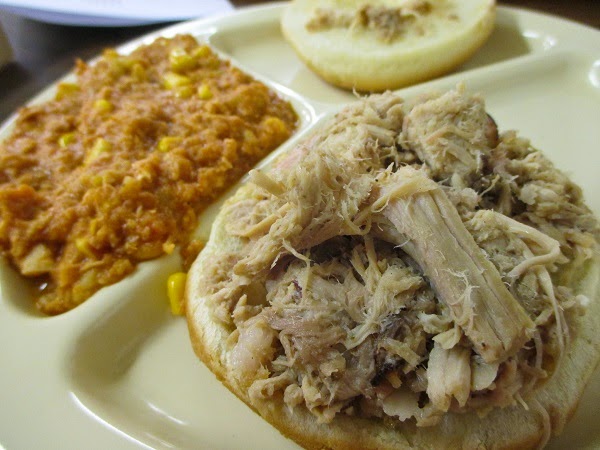 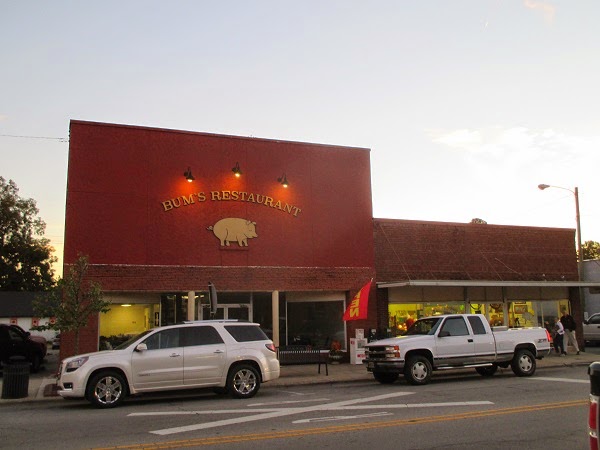 I ordered a barbecue sandwich and a side, as I would at most places. However, the meat can best be called nondescript, and had been sitting in the steam tray for so long that the smoke flavor had been overwhelmed by water. The sauce – a strong vinegar-pepper blend – gave it a little life, but not enough. Too bad; this place has been in business since 1968, serving some devoted customers and curious tourists like me from their cafeteria line, and I’d like to think that I just caught them on a bad day.

Normally, on these trips, I like to have some slaw as a side, but at Bum’s, I decided to give the Brunswick stew a try. This is such a standard at barbecue joints in Georgia that we only remember that it’s in any way regional when we go someplace else and don’t see it on the menu. There are a thousand recipes for stew with any ingredient under the sun. We’ve enjoyed stews of every thickness from “water” to “would-stick-to-the-ceiling,” incorporating everything from carrots to peas to spaghetti noodles. Yet in very nearly every stew that we have tried in Georgia, the dominant vegetable flavor is tomato. There have been only two exceptions in our experience: at Sprayberry’s Barbecue in Newnan GA and at Zeb’s in Danielsville GA, tomato is present, but the principal flavor is corn.

I have often wondered whether the stew at those establishments owes more to the Brunswick stew of Virginia, and, after sampling the very corn-heavy stew at Bum’s, I’m more inclined to think so. Obviously, a real investigation would actually require, you know, spending a few days eating the stew actually in Virginia itself and not an hour south of the state, but I believe that the restaurants in this region have a much greater influence from Virginia’s traditions than Georgia’s. I liked this stew, not as much as many in Georgia, but it’s still very good on its own terms. The flavor was very interesting. When the road takes me back to Ayden – and, as you’ll learn later this week, I sincerely hope that it does – I would like to give Bum’s another visit, and have a long lunch with fried chicken, collards, tomatoes, and more of this stew.