A couple of years ago, I found my favorite Indian restaurant. It’s up in Asheville and it’s called Chai Pani. They announced shortly afterward that they were looking forward to expanding and opening a second store in Atlanta. I’ve been waiting impatiently ever since.

Unfortunately, my experiences with Indian food prior to the last four years of blog exploration, while often good, had been somewhat uniform. I had many good meals at many good restaurants in the Atlanta area that formed my opinions of what to expect from this mostly unfamiliar cuisine, but every place that I had visited before starting the blog was very, very similar. They were all much like what we experienced in 2011 when we visited Mirch Masala in Decatur, leading me to conclude that the experience of dining in any Indian restaurant, anywhere, would be full of cheap tuxedos and tablecloths, menus that had been assembled with care many years previously but were now falling apart, and probably a buffet. These were the Indian restaurant equivalents of our El-This-Los-That “Mexican” food joints for American palates, or the Golden-This-Happy-That “Chinese” food joints for American palates, and they were, in retrospect, the disagreeable standard. This style of presentation wasn’t confined to Atlanta; I have a remarkably amusing story about an identikit place in Nashville called Sitar, where the food was terrific but the restaurant was just the same, and Marie and I visited a place in Toronto in 2009 that was also exactly the like every place in Atlanta that I tried.

I mention this because while I enjoyed the food that I was trying at all these many and varied restaurants in the 1990s and 2000s, including occasionally well-regarded local names like Haveli and Himalayas, the rigid presentation to the public was not representative of how many fun culinary choices could be created when chefs get to experiment, have fun with presentation, and cook a few dishes that are not the same as every other menu in the city. And I suspect that restaurants like these were here in Atlanta in the mid-to-late 1990s, but fortune didn’t lead me to any of them at the time.

I’ve had much, much better luck since we started writing this blog, and while I’m still a novice when it comes to the cuisine of India, I’ve had terrific meals at all sorts of places that don’t do things by the fading old standard of Indian restaurants in the city. Chat Patti and Zyka have probably been my favorites among many really good places, with honorable mentions to Planet Bombay (the most like the old style), Bhojanic, and Tandoor. But now that Chai Pani is here, well, the search is over. I completely love this place. 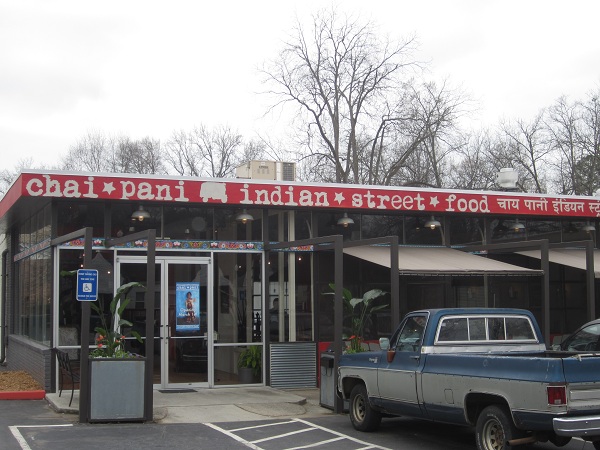 A couple of weeks ago, I was talking with Lakshmi, who writes The Rich Vegetarian, and suggested we visit after Chai Pani opened on March 1. Lakshmi had already been exchanging emails with Chef Meherwan Irani who, like her, is from Mumbai, and she invited me to join her for the opening launch party. I also brought along the girlchild, resplendent in her blue hair and my dad’s old fedora, because we were at a doctor’s appointment about halfway to Decatur anyway. This was important because the girlchild’s impression of Indian food, like mine, had been formed by the tuxedo-n-curry approach, only she didn’t like it, at all, and, in her stubborn teenage way, had completely balked at the idea of trying any new flavors or tastes or experiences even after I’d come home from places like Zyka raving that what I had was nothing at all like the rogan josh that she hadn’t liked at a tuxedo-n-curry place years before.

The girlchild left the launch party with her mind opened, and blown. There were dishes that she sampled that she didn’t enjoy, to be sure, but also several things that she completely loved.

Chai Pani’s approach is “Indian Street Food,” meaning it’s a much closer cousin to Chat Patti or NaanStop than the old elephants. Everything is done with a fun and upbeat flair, and a focus on fresh vegetables and spices, and experimentation. They showed off several dishes at the party, and we really liked the Corn Bhel, and the Bhel Puri, to start things off. I had tried Bhel Puri, a dry little mix of everything from puffed rice to chickpea noodles to onions, for the first time at Chat Patti a few months previously and enjoyed the heck out of it, but Chai Pani’s is even better, with a very agreeably spicy kick. We also enjoyed the Sev Potato Dahi Puri, which is a larger flour crisp stuffed with potatoes, chickpea noodles and yogurt.

On the not-quite-as-wonderful side, the lamb hash Sloppy Jai sandwich did not quite live up to the weight of unimaginable expectations that I’d given it after anticipating it for the eighteen months since we’ve been in Asheville, but it was just fine all the same, and the girlchild, while most of the dishes had her eyes wide with delight, was not at all taken with the Okra Fries, but good heaven, what a weird and curious idea these are. They’re julienned, mashed flat, salted and flash-fried, and thunderously unlike any okra you’ve had before. They weren’t completely to my taste either, but they win for effort.

They don’t appear on the regular menu, but the staff was making the rounds with trays of a couple of more traditional American-styled dishes, Saag Paneer and Butter Chicken. Both of these, happily, left the girlchild very pleased, but I think she was even more thrilled to have a mango lassi. I prefered the lime ricky, which I can never drink enough of, but as I told Lakshmi, the girlchild has a standing challenge that she can drink anybody under the table, provided the drink is a milkshake. I reckon a lassi is close enough.

As this chapter goes up, Chai Pani has been open for three weeks now. I made another visit for lunch during its second week, meeting David and hoping that this place could live up to the hype I’d afforded it. 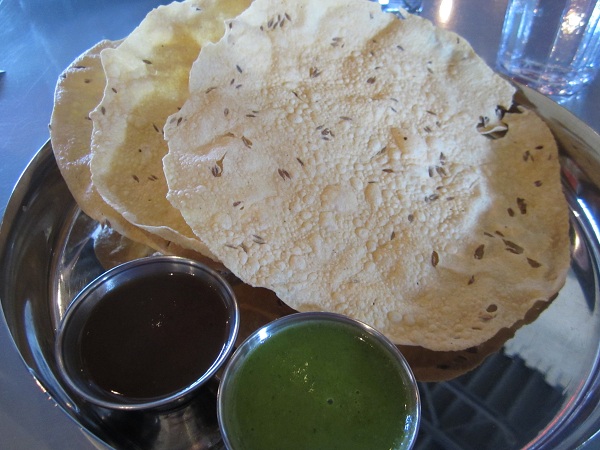 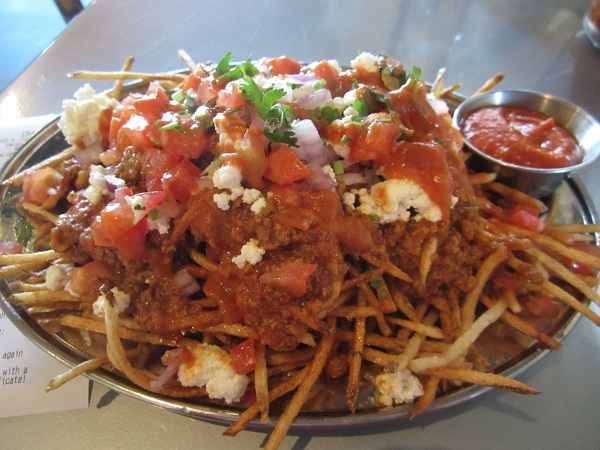 This time, I tried out some terrific and probably not-even-remotely-authentic Bombay chili cheese fries. These are crisp and crunchy house-cut shoestrings buried under mildly spicy lamb hash and vegetables, with paneer cheese and a small cup of curried ketchup on the side. The papadums, while tasty, are no different from anybody else’s, but the green sauce, made from cilantro and mint and serrano peppers, is just terrific. Ask for an extra cup of that with the Bombay fries and your mouth will never leave you for another face. David had that day’s vegetarian thali special, a potato paneer tray, and was very pleased. He took a few menus back to the office, believing his co-workers were certain to enjoy it.

We’re very glad to welcome this great place to the city, and if there are any skeptics out there, I hope that it wins them over as thoroughly as it did my daughter.

(Naturally, the launch was a media event and our meal was complementary. It’s our policy to always note when we’ve received our meal without charge. If you would like to invite us to your restaurant’s media events, please drop Grant a line at gmslegion@gmail.com .)