I’ve only had a single meal here, and it was something that I’ve never tried before, but I have finally found an Indian restaurant to replace the dearly missed Moksha in my affections. Shame the darn place is all the way up in Asheville. It’s called Chai Pani and it is thunderously unlike any of the legion of boring, rule-following, horribly-serviced, tableclothed Indian restaurants that drive me nuts here in Atlanta. This place is completely wonderful, and I really am looking forward to digging into their menu and trying a few more dishes!

This place, happily, is a no-frills take on Indian street food, as opposed to the forced, artificial, laminate-peeling-from-the-menus places that aggravate me so much. It’s a tiny little restaurant on Battery Park that caught my eye last year and I knew that wherever else I managed to have a small meal during Bele Chere, this place was definitely on the agenda. It was actually where I headed first when we arrived around 11 am, but they did not open for lunch until noon during the festival. So Marie and my daughter and I split up and did other things, and Marie came back with me a little after two to try it out.

I ordered the vada pav, which the menu describes as a “spicy potato and peas dumpling fried in a chickpea batter, served on a warm bun with house pickled garnishes and chutney.” Oh, my heavens, they were like two great big sliders of spicy awesomeness, and they were magical. Marie said that it was a little spicier than she liked, but it was just right for me. 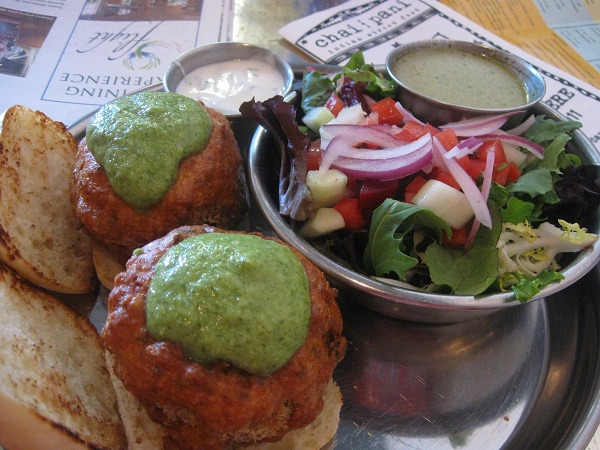 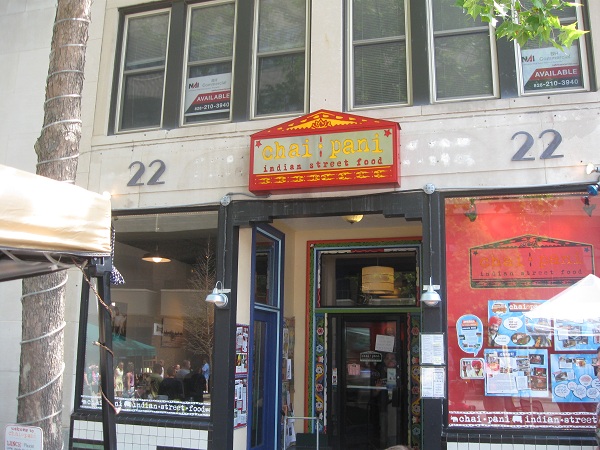 My sandwiches came with a small salad – I chose that over the fries, figuring there was starch enough in the meal – and those were some of the freshest vegetables I’ve had in a salad in ages. I really liked what beets that I got to enjoy after Marie got finished pilfering them from me, and the dressing, thin and green, was really nice. I enjoyed everything so much.

The prices aren’t much less than what you’d pay at one of those restaurants that serve Indian food, but I’d much rather get my own silverware in a business that genuinely seems glad to have me there, with excellent service, and which is offering food unlike the standards seen on every other place’s menu.

Chai Pani is one of quite a few restaurants that we’ve visited in Asheville that tries to live by a farm-to-table creed, something sorely lacking in Indian cuisine in Atlanta. Looking over the menu reveals so many more interesting things. I’m really intrigued by the ground turkey “sloppy jai,” but all the savory utthapams and daily special thali meals are also tempting. We won’t be back in Asheville until the spring, and I will definitely be returning here then and reporting back on my findings.

Other blog posts about Chai Pani: