This is Marie, with an article about something that I cooked.

You know those days when you walk in the door, look at the kitchen, and say “I have no ideas?” Well, foodies get them too. Possibly more than most, because I can’t just open a can and put the contents on a plate unless I’m willing to get some really impressive puppy dog looks, and possibly a growl or two. Well, except for the baby, as he likes beans of all descriptions and isn’t fussy about sprucing them up. So when Grant presented me with a shredded cheese packet that had a recipe on the back and said, while pointing vigorously, “This! Make this, it looks good!” there was no competing recipe to delay the implementation much.

I have to admit that one of the first things that got checked was how much time it took to make. Under 30 minutes was a good sign. So I said OK, even though VERY prominently in the photo of the recipe olives could be seen lurking. There are people in my house who like them, so who am I to say no…especially since they’re sprinkled on at the end? That last item in the directions was rather a relief, though. I love olive oil on bread and on pasta, but for some reason am not thrilled by the fruit. Go figure.

Anyway, as has been mentioned before, I can’t follow a recipe without changing something, a habit taken rather to a fault. In fact, that particular habit has caused Grant to declare that I am directly forbidden any additional changes to another recipe he particularly likes, because the next-to-last time it was perfect and I couldn’t recall how to do it that way any more, so the most recent version is supposed to be the final cut on that recipe. I’m still tempted to fiddle a bit, because there might be a hint of a recollection of what was done to make the last version work so well. I’m like that in other ways, too. On the rare occasions when I do a cross-stitch pattern, I generally change things in that as well to make it more my own. Once I took a dragon pattern by Teresa Wentzler (some of the steps of making it are demonstrated by “less bitching, more stitching” at her blog) and changed all the blues and purples to reds, all the greens to orange, and many of the other shades to yellow. It was insane and took me three years, but no one else in the world has that particular version. Cooking brings up the same contrary streak in me. Probably that’s why I have never been particularly good at bread. That’s a chemical recipe and needs to be done the same way every time, and someone else has ALWAYS found the best way to do bread.

In this case, however, I was free to experiment and tweak to my heart’s content because there wasn’t a perfect version already. My first thought was that the suggested list of ingredients was sadly deficient in herbs. In fact, you will notice that there is nothing green whatsoever, unless you use a green pepper instead of a red one! The very first thing I decided to add was some Italian herb puree – if I’d had any it would have been just some fresh basil instead. It’s spring now, so that might be in my next attempt at this recipe. the directions also did not mention salt or pepper. Salt was probably there in spades in the broth, so that could be skipped, but pepper is necessary. 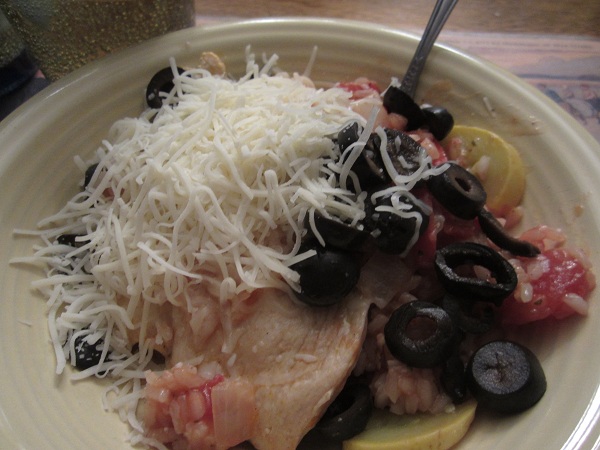 2. Add broth, tomatoes, rice, onion and pepper, making sure rice is in broth. Heat to boiling. Reduce heat; cover. Simmer 20 minutes until chicken is no longer pink and rice is tender.

3. Sprinkle with cheese and olives. Let stand 1 to 2 minutes to melt cheese.

Our son has an on-again off-again love affair with olives. He tends to eat tons of them when he’s in the mood, and play with them otherwise. Or maybe he has standards of freshness or flavor that escape us. In any case, he gave a strong thumbs-up to the recipe, getting tomatoes all over his face and scooping rice into his hair. I am not sure why there is a direct correlation between how much he likes a food and the acreage of his body surface the meal will cover him by the time he stops eating. You’d think he’d want more on the inside than the outside, but such is not the case. Generally, as in this case, the success of the recipe is measured in how long the bath afterwards will have to be.

More importantly, however, we all liked the meal, so it’s going into the general rotation. Aside from the canned tomatoes which are easy enough to add, all the ingredients were already on my regular shopping list, which is a strong recommendation for any recipe. You should try it, too!