This is Marie, contributing an article about Olive Affairs. But first, I need to say a little bit about how I wound up there. Grant and I were having a separate weekend, with him taking the girlchild up to Tennessee while I brought the boychild down to visit his grandparents. Originally, the plan had been to collect a restaurant in Savannah after the boy worked off some of his wiggles in the Children’s Museum there, but the trip took longer than anticipated and I realized that the timing had us getting out of Savannah on a Friday at rush hour which although not up to Atlanta standards was nevertheless a Very Bad Idea.

So we went to a restaurant with a play area south of the city and I resignedly bought quasi-food while he took care of the aforementioned wiggles in the company of three or four other children. So I started looking around Brunswick and St. Simons for a place to write about instead, and found a neat new seafood restaurant…that inconveniently was open only for dinner. Next time.

So while taking a rest from my (admittedly not very time-consuming) labors on behalf of the blog, the baby and I wound up wandering around the artsy-fartsy fair that regularly comes to the island. Mostly its dealers sell quilts and handmade soap and a lot of antique-y furniture and pottery, but there are also kids’ toys and handcrafted food items and sometimes an old-coins dealer.

We stopped by the table for Olive Affairs and I spoke with Vicki, who was wrangling the booth. I wasn’t originally going to get any of the tapenade, as olives aren’t really my thing. However, while I was looking over their display of tomato soup, which I’d been told was quite good and is adaptable as gazpacho (a favorite of Grant’s), the baby tried some of the sample crackers with tapenade and promptly asked for more. Vicki said the baby was opposite of the usual; generally kids will grab a cracker and be dubious about the topping, while my boy scarfed down the olives and then licked uninterestedly at the cracker. I went away that time, but came back later and gave him another bite and decided that he needed more of this stuff in his life. You see, I have a sneaking suspicion, although I can’t be totally sure, that this tapenade had been in one of our Christmas gifts a while ago. I used some of it here and there in recipes and Grant may have finished off the rest. I have a sneaking suspicion that some of it went into a version of the Pasta Alberto recipe that Grant likes so much, and was one of the more successful versions. When I crack this jar, that will be tested. 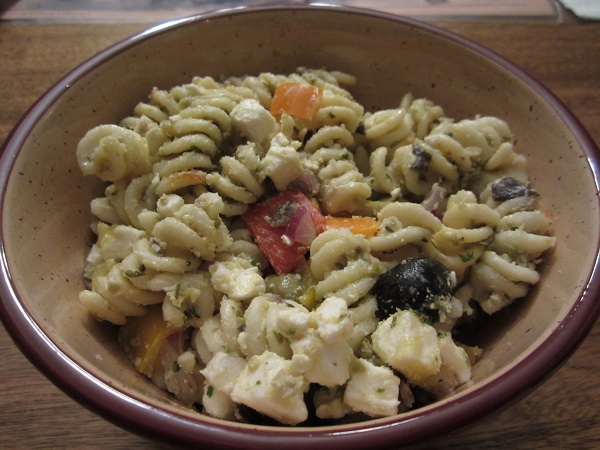 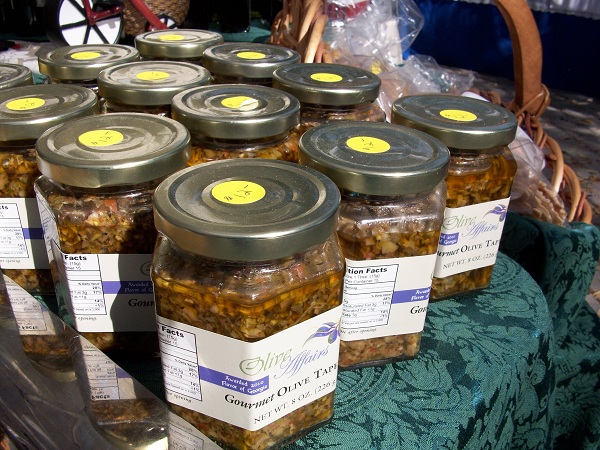 I had a brief conversation with the vendor, and she mentioned throwing it into some angel hair pasta with tomatoes and olive oil as a simple dinner, then said that there were some recipes on her site – apparently she has hundreds of recipes in her head, but isn’t very good at getting them onto the web. A list is on their site, and not very long; I gather it’s mainly customer submissions. Anyway, she also mentioned that they have sandwiches and stuff at their store on the mainland. So that meant that on my way out of town I had to stop by their store. While it is not in the most picturesque part of town, hence the TERRIBLE photo (compounded by the use of my terrible cell phone camera – Grant had the real camera in Tennessee) it was cute inside.

The store is an odd combination, half of it devoted to foodstuffs like gourmet pasta, tomato soup, and a smallish cooler with pasta salad and sandwiches, and large quanties of their prize-winning tapenade. They’ve got a picture of then-Governor Sonny Perdue shaking hands with one of the two creators of the product, Vicki Waddell-Forton and Larry Eisenberg, when they won the jams, jellies and sauces category of the 2010 Flavor of Georgia contest. The other half of the store has decorative items.

Vicki wasn’t at the store, as she was resting up from her grueling weekend at the arts fair. This store is their second location. Originally they had set up in Darien, but their customer base is much more in the Brunswick/St. Simons area and so they moved to the current location about three weeks before my visit – they’d been so busy preparing for the arts fair where I found them that they hadn’t even updated their web site yet to reflect the move. In fact, the folks at the store said the fair had been so successful that they had nearly exhausted their stock, which pleased me greatly. The cooler contained one of my favorite ginger beers, from the Jamaican brand D&G. There were also some sandwiches and one lone remaining container of pasta salad. They were kind enough to offer a taste from a sample container in the back. I thought it was quite pretty good, but the baby started dancing, whirling and laughing after he had been offered a bite. He ate the rest of the sample, of course.

The week after I returned home, I made Mediterranean Skillet for dinner, but realized too late that we were out of olives. The tapenade made a completely wonderful substitute. Grant said that it was even better with the tapenade, and urged me to keep some around for the next time that we make it.