One of Chattanooga’s most popular restaurants these days is a fun little drinking hole, just a little bit naughty-minded, within a short walk from the main drag along the North Shore. Taylor and Mike Monen opened the first Taco Mamacita in 2008. It’s in a really curious location. They found a dying strip mall, anchored, sort of, by a Family Dollar, and opened the restaurant in the corner slot. It has been a huge success, allowing the Monens the chance to not only branch out into burgers via their popular Urban Stack, but also expand to other cities. The second Taco Mamacita opened in Nashville in late 2009, and a third opened on South Carolina’s Sullivan Island last summer.

We honestly thought that twenty minutes running around in the Coolidge Park fountains would have worn our baby out, especially on top of all the food and activities over the previous five hours, but no, he was just as wild and cantankerous as was possible, and did not wish to sit still while we ate. 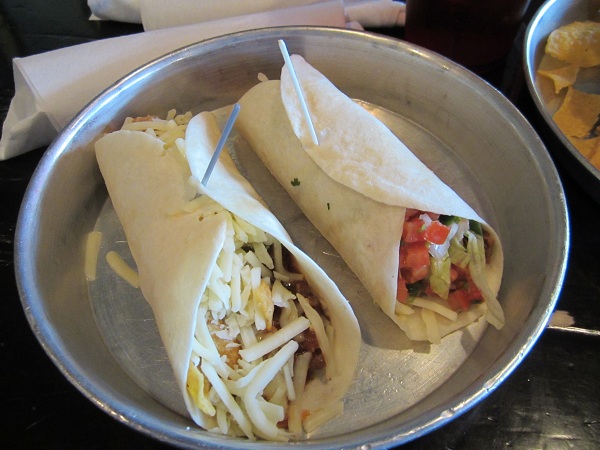 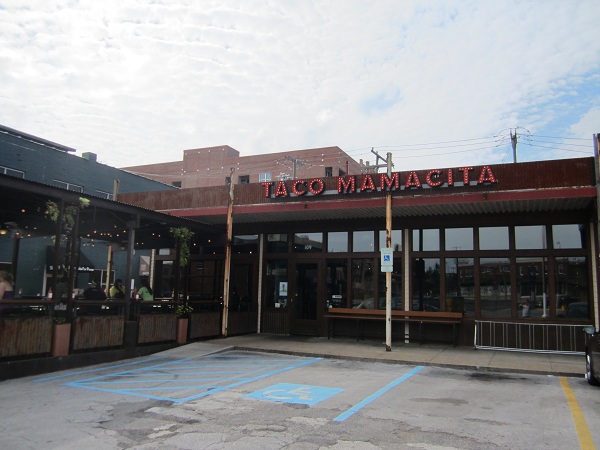 As we saw with Urban Stack on our previous trip to Chattanooga, the Monens have a commitment to making everything fresh. Strangely, though, neither Marie nor I were really all that hungry, and despite the considerable praise that this restaurant gets for its guacamole dip and its corn salsa, as soon as we opened the menus, we realized that all we really wanted was a light snack. I suppose that since we planned this trip as principally a big play day for the baby, we didn’t have the mindset necessary to dig into the menu very far.

What we did find was something that Atlantans might find familiar if they’ve visited a Twisted Taco. With a laundry list of ingredients, the kitchen, headed up by Roberto Santibanez, makes several very neat takes on traditional tacos. These are very fun and playful examples of fusion. I had an Oy Vey (beef brisket and escabeche, topped with ranchero sauce, lettuce, pico de gallo, monterey jack cheese and little guacamole) and a Sloppy Jose, with ground beef, Fritos chips, spicy sauce, cheese and sour cream. Both were really tasty. Priced around $4 each, these are perfect snacks for kicking back with friends over the course of several hours and margaritas or PBRs. We didn’t do this place justice, but we certainly enjoyed the stop.

Now, our regular readers may recall that after our last trip to Chattanooga, we stopped in Dalton, and I resolved that we needed to do this more frequently, as northwest Georgia is criminally underrepresented, not just on our own blog, but everybody else’s as well. There are also better than a dozen barbecue joints listed here on Urbanspoon that absolutely nobody has visited and talked about for the world to read. Unfortunately, every man jack one of them is closed on Sundays. Even a frozen yogurt place that the blog More Than Just Flooring had featured is closed on Sundays. With no other option presenting itself, we made a stop at the Sonic on the main drag, Walnut, for Marie to enjoy one of her favorite guilty pleasures, a grape slush. I had a cherry slush and enjoyed it just fine. We’d prefer to have given our sweets money to an independent local business, but heck, fellows, y’all have to actually be open for us to do that.

This trip did leave me resolved to do something about the poor representation of the area’s barbecue shacks. Hopefully, before the end of the year, we’ll come back to Dalton on a Saturday and visit three or four of them. We sort of need to go hiking at Cloudland Canyon, too. Hmmm. This sounds better every minute.

Other blog posts about Taco Mamacita: