Marie and I decided to mix up our Friday evening malaise, almost as though I identified a serious problem by writing about it a couple of chapters previously. Normally, a long week’s work and the Friday night commute back to our suburb from her employer’s does her in, so one thing that we could try is having the baby and me get out into the traffic, spend some time in Dunwoody, and go home after the mess dies down. This was certainly achievable a couple of Fridays ago when my long-serving Toyota Camry saw its transmission finally sputter and die, and I spent the day in her car shopping for something new. And seeing the Judge Dredd movie; that, too. In the evening, the baby and I went out to collect her from work, and find something to eat.

We found supper at a venerable little place in a strip mall that was once very nice, but has been deteriorating visibly and losing tenants. It’s called E. 48th Street Market and it’s been serving this community since 1986. Appropriating liberally from the restaurant’s history, it was “built to bring back the sense of the neighborhood grocery store.” When Charlie and Anita Augello first opened their little storefront, it didn’t have any tables. It offered shelves of wines, hard-to-find olive oils, imported flours, and condiments for cooks who wanted to make Italian-styled dishes at home, freshly baked bread, a variety of pasta salads, and sliced meats and sausages. They sold sandwiches to go, and eventually found space for a pair of tables. A few years later, they enclosed a patio around the sidewalk in front with space for a few more guests to stay and eat. 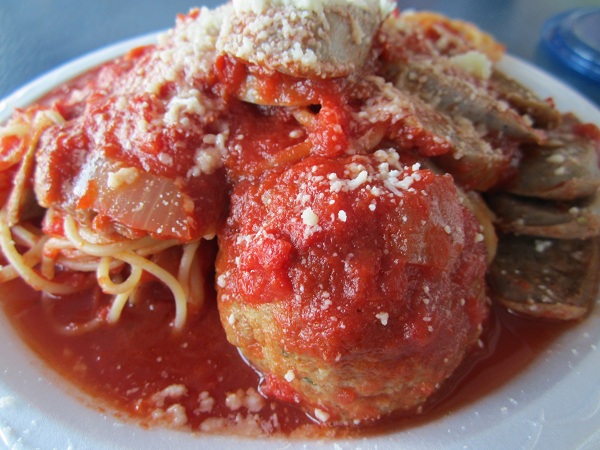 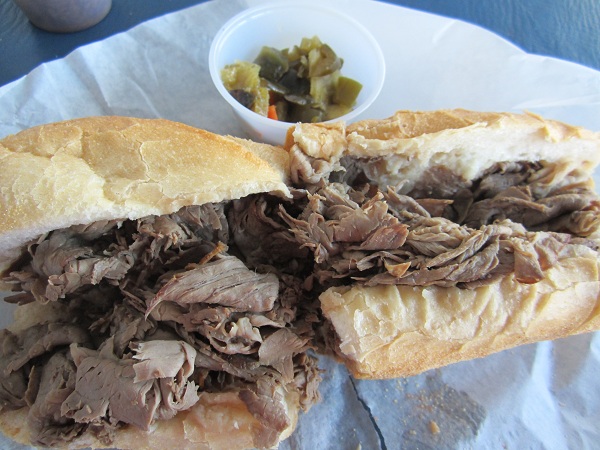 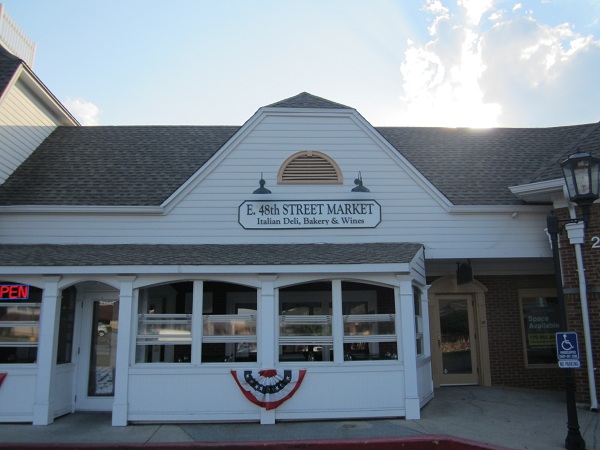 Marie enjoyed a pretty good plate of pasta. She had marinara sauce with a meatball and sausage over linguini. The sauce was not bad, but not especially inspiring either, but this was more than made up for by the wonderful meats. The meatball was simply excellent, and the sausage to die for. The meat was just so tender and spiced perfectly.

I was stumped by which sandwich to order. They currently have 26 hero sandwiches on their menu, and I decided, at last, to simply get an Italian beef with hot Giardinera pepper relish, because I had not ordered Italian beef from anybody, anywhere, in at least two years. I was pretty pleased, especially with the fantastic bread. They do a flawless job just completely nailing this, perfectly baked with a crusty outside and pillowy interior. Of course, just as soon as I started eating it, I decided that what I really wanted was their signature “stoffato,” with salami and two kinds of ham. I’ll get it next time.

This was a good meal, served up by a friendly and very positive staff who genuinely enjoyed helping us decide what we wanted. It has a loyal following from area families, and is a regular stop for people collecting picnic baskets for evening outings at one of the couple of dozen academies and schools in the community. People seem to really like this place a lot, and with good reason.

I must confess that we did something very silly and foolish after eating. In part because I just like ice cream a whole heck of a lot, and in part because I’m a sneaky opportunist who takes advantage of the chance to visit two businesses in an evening, and boost my Urbanspoon statistics accordingly, we passed on having a cannoli or some zeppoles after our meal, and instead wandered down to the Carvel store in the strip mall. I don’t know that I’ve ever actually had Carvel before. I don’t know that I ever will again. 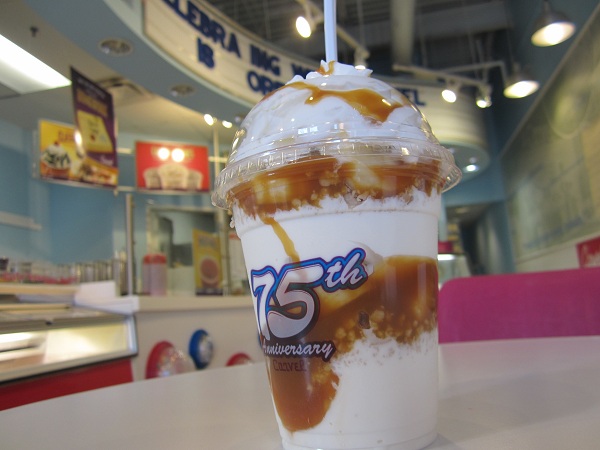 Now, we never set out to trash a place, and almost always just politely draw a veil of silence over a subpar experience, but I remain so utterly baffled by what happened here that I elect here to share it. See, when guests enter, there’s a large ad on the wall to the left suggesting a milkshake, made “from premium ice cream.” There is also a menu board, offering milkshakes, that reads something like “chocolate, or vanilla, or pick your favorite flavor!” So I looked in the cooler and decided on chocolate chip cookie dough, and the fellow told me that I couldn’t have that. Their milkshakes are not actually made from premium ice cream at all, but from soft serve goo, and my choices were, in fact, either chocolate or vanilla only, and not from your favorite flavor.

So I told the gentleman that I didn’t care to have soft serve ice cream, and would have a bananas foster sundae instead. He got right to work on it, using, wait for it, soft serve ice cream. I honestly don’t think it occurred to him to tell me “Actually, we use soft serve in our sundaes as well.” Somehow, I found myself actually giving the man money for it, and not interrupting his work by asking him why in the world, after just hearing me say that I don’t want soft serve, is he making me a sundae with some. Perhaps I felt sorry for him; he had no other customers, the parking lot has potholes and construction scars that look like Ypres during the Great War, and half the neighboring businesses and one of the outparcels are closed. So I paid the five bucks and took a couple of photos. At the same time, the bonded polymer molecules of the soft serve goo disintegrated and, about sixteen seconds after we sat it down, it had completely melted into vanilla-flavored soup with some bananas and caramel.

I knew better. And now I owe myself a cannoli, by damn.

Other blog posts about the Market: