To make up for my daughter being away for a week, and, as it turned out, not having quite as perfect a vacation as she had hoped, I asked her what sort of food she’d like when we got to Chattanooga. She picked pizza, and I looked for something promising on the I-75 side of town. Having already tried everybody’s patience by turning the ninety-minute drive from Knoxville into three and change, I didn’t want to press my luck going around and north to Soddy-Daisy or someplace and suggesting that this was still technically the Chattanooga area. No, best just to find something close to the interstate and move on.

Happily, one of the locations of Lupi’s Pizza Pies is in the East Brainerd neighborhood, in the same strip center as one of the area’s Mojo Burrito stores. Since we last wrote about Lupi’s (we visited their downtown store in March 2013), they opened a new, fifth location further up 75 in Ooltewah, but this one worked fine for us. 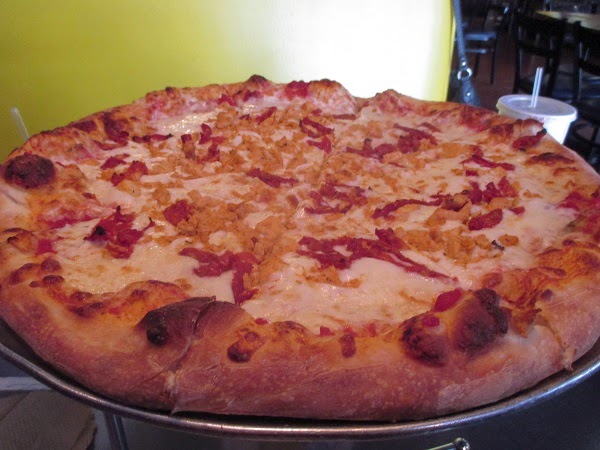 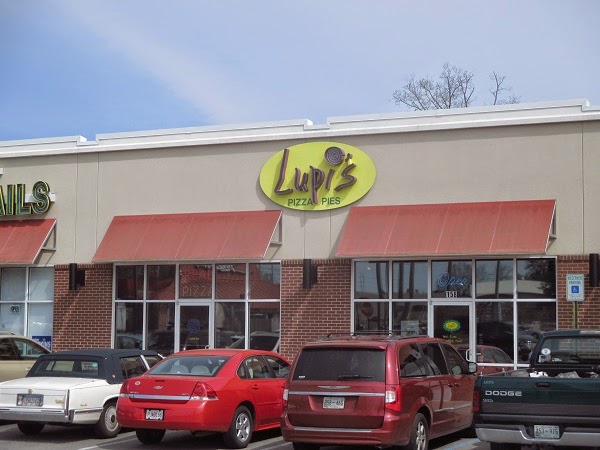 My daughter was pleasantly surprised to be given the authority to order whatever she’d like. Pizza, at least in our family, can be absurdly contentious about who wants what and when. It never helps that my daughter’s mercurial teenage weirdness is the least predictable thing on the planet. The last time we were in Tennessee, she had removed chicken from her diet. She’s recovered, and asked for a pie with spicy chicken and sun-dried tomatoes.

Lupi’s works very hard to source all of their ingredients from local suppliers, and the result is one of the most remarkably tasty pizzas that we’ve ever had. I suppose that I might enjoy other places’ crust or sauce or even cheese, and I think you could make the argument that if you’re looking for a simple New York-style cheese slice, there are better options. But if you like a pie covered with fresh, perfectly seasoned toppings, Lupi’s is definitely a cut above the norm. Their commitment is so deep that Lupi’s owner, Dorris Shober, is quoted in an article framed on the wall as having heard back from some local farmers that Lupi’s orders have saved their struggling businesses. I can get behind that.

I made up for my disappointment about Pure Sodaworks closing their storefront (temporarily, we hope) to focus on their bottling, which was always their goal, but I didn’t know that meant we’d lose out on their awesome, freshly hand-mixed sodas. I got a bottle of their Cafe Cola to go along with the pie. I also didn’t draw any attention to it, so that Marie and the girlchild would assume that I was drinking a beer, about which they have no interest, and not look twice. That probably wasn’t the nicest thing that I’ve ever done, but I enjoyed Marie’s slow revelation toward the end of the meal.

I’m glad that at least we can still get a Pure soda at Lupi’s and at other great Chattanooga restaurants, and I was glad to read, after we got home, that they have worked out a deal with Clumpie’s Ice Cream to continue mixing fresh sodas. Thank heaven. We hope to take a trip to Chattanooga and play in Coolidge Park in June and I sure would miss having three or four mugs of Apple Pie.