Kevin Brown told me a sad, but positive story about his tiny little burger joint a few weeks ago. After we finished a terrific meal here, I stopped in the gents’ and was surprised and impressed by a huge biker mural on the wall. I asked Brown about it and he explained that he took over the building, which was once a bike shop, after that business’s owner was killed in a crash a mile or so up the road on a notoriously dangerous hairpin curve. He left the mural, among other things, up around the property in his memory.

I found Kevin Brown’s Burgers on Urbanspoon, looking for a restaurant on the I-75 corridor. So that we keep backtracking to a minimum when we come to Chattanooga, we typically have a meal on the I-24 side, or downtown, and then another after we finish at McKay Books, which is off exit 7 on I-75. (Or the other way around, anyhow.) As it turned out, this restaurant is actually pretty far off the beaten path and not quite on the 75 corridor after all. You go to exit 11, then twist up a back road that crosses the interstate two miles north, and then another four miles northwest until you reach a crossroads at the outskirts of the Ooltewah community.

We had a successful day at McKay. Between the four of us, David, Matt, Kelley and I unloaded a trunk’s worth of stuff we did not need anymore, and I didn’t bring very much home. Well, apart from money. I did pretty well this trip and only bought a Miles Davis CD and a couple of books. 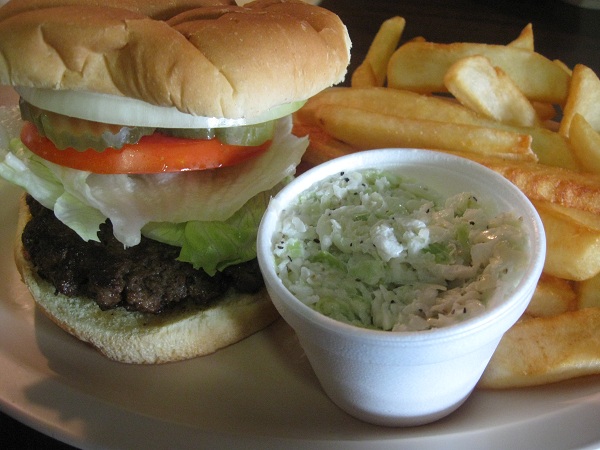 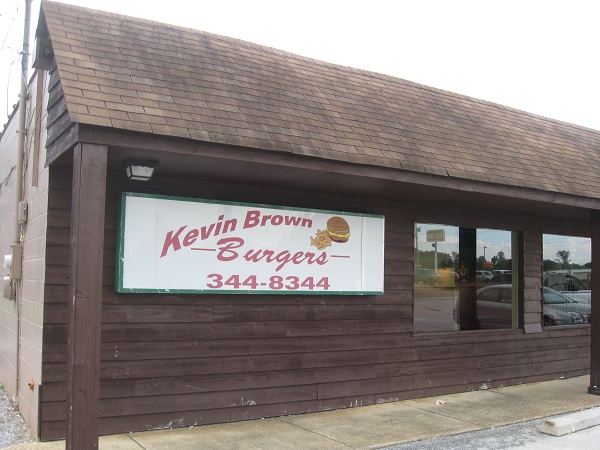 We are always at McKay for a long time, and lunch at English Rose took an eternity. It was after 3 before we got to Kevin Brown’s. It’s a ramshackle place, and I liked it before I walked in the door. The service is good and attentive, and the food is terrific.

Matt and Kelley, having enjoyed larger lunches than I did, and desserts, just split an order of fried pickles. These are full spears, and they said they were wonderful. I had a burger with steak fries. It was almost comically difficult to eat, a big patty buried under a mountain of iceberg lettuce and toppings, so the toothpick holding it together was critical. It was delicious, so juicy and wonderful. The slaw was really good, too. There was just the right amount of mayo, balancing without smothering.

As much as I liked this burger, I was incredibly envious of the brisket sandwich that David ordered. It was piled about as high as my burger, only David disassembled it by removing the toothpick and took a knife and fork to it. He offered us some brisket, and my eyes about popped out of my head. True, I don’t order brisket often, as I prefer pork, and only when somebody’s made a great claim for its quality, but I don’t have any qualms calling this the best brisket that I’ve ever had. It was smoked perfectly, and incredibly tender.

You know you’ve found a good place when one of the best burgers you’ve had in the last couple of months turns out to be not good enough. Friends, if you are traveling between Chattanooga and Knoxville, seriously, get off the interstate and check this place out. It is out of the way, keeps to itself and quietly serves up something really amazing. I can’t recommend it highly enough.