I’m a sucker for attention and personalized service from owners of good restaurants. Chef Henry Chandler either saw me walking along Acworth’s main street, looking in windows and snapping photos of the beautiful old buildings and figured me for some loudmouth with a web page, or he treats everybody who comes into his place as a valuable guest, because I hadn’t been in his restaurant for fifteen seconds before he took me by the hand, welcomed me with a roar and thanked me for coming.

Chandler is an LSU Tigers fan, but he has this remarkable mane of hair that makes him look like a lion. It wasn’t just me, though, much as I’d like to pretend that I have any import in the world. I kept an eye open as I enjoyed a long and leisurely lunch at Henry’s Louisiana Grill last Thursday and saw him visit darn near every table with handshakes and thanks. The man’s in the right business. He creates extremely good food and he really wants everybody to enjoy it and tell all their friends.

I had business a couple of miles down the road that morning, otherwise I might have put off trying Henry’s Louisiana Grill even longer. Barbecue, I can get around to a heck of a drive any old time, but higher-priced Cajun-style cooking – similar to what you might find on the menu at the Copeland’s chain – is always hit or miss with me, and so I was a little hesitant to head up that way. Neal pointed out that there’s a value-priced little creole place in Smyrna on South Cobb Drive, where a Huddle House used to be. I might try that sometime soon, but I wonder whether it could be as good as Henry’s.

Downtown Acworth has been quite beautifully restored over the last few years, and looks like the prototypical Main Street USA, only with just the one row of storefronts, with railroad tracks on one side. It was the principal location for that remake of Footloose that you probably already forgot happened. Henry’s, in the old Armstrong Building, is one of a few nice restaurants and sandwich shops among gift shops and sporting goods stores, with the city hall and library on the street immediately behind them. It feels a little artificial – the paint on the two or more Coca-Cola brickwork billboards still looks wet – but it also feels laid-back and comfortable. 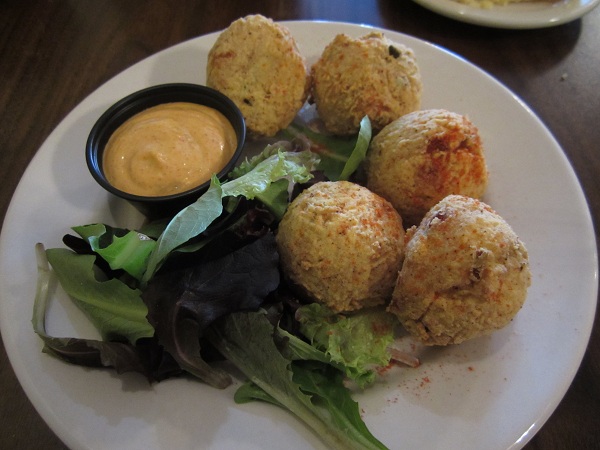 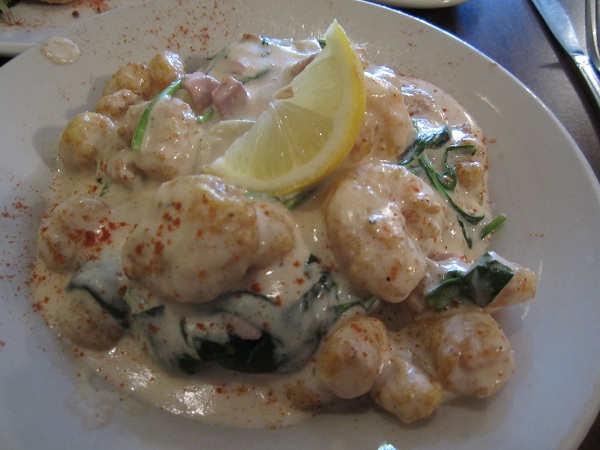 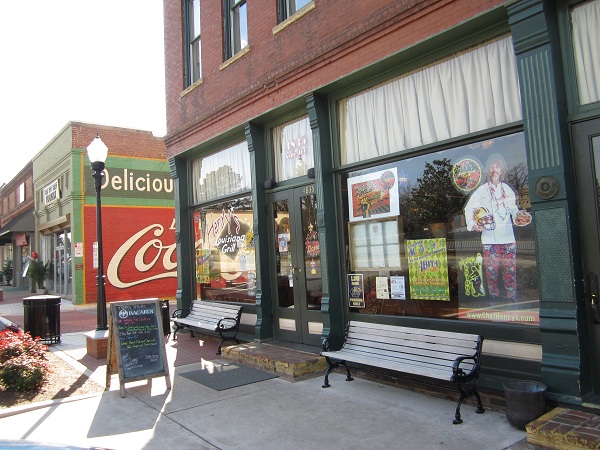 Regular readers know that, a few weeks ago, Marie and I took a road trip through South Carolina and Augusta. I had six small meals on that trip, and I was not as stuffed at the end of the day as I was after a single lunch at Henry’s. The portions here are really large, and the food very heavy and rich. Since I read up a little before coming by, I knew that I wanted the “Ooh La La,” which Malika at Atlanta Restaurant Blog recommended back in ’09. I ordered mine with shrimp, and it was completely packed with little fried babies in a thick, mildly spiced cream sauce over angel hair pasta with a little spinach. It was excellent, but I bet that more than a few pennies of the price goes to keep the restaurant stocked in take-home boxes. Who finishes this?

I certainly couldn’t finish my order, to be honest. There was just too much to eat, especially after I’d enjoyed a small salad – the ginger citrus dressing really is special – and some amazing hush puppies. These are spicy and sweet and fried just to the instant that crispness is obtained and not a second more, and then served over greens with a tangy remoulade. These are as far from being an afterthought tossed into a basket of fish as is possible.

I knew that I was indulging, but I also knew that I would have a comparatively low-cost weekend, with Marie and the baby taking a long weekend down on the island for a getaway. I could afford to splurge, and, with no particular place to go, I could also afford the time to just sit in my car for a few minutes to recover, and then a few minutes at that county park, Kenworth, that I passed on the way up, getting a little light exercise. After that fabulous and heavy meal, some was definitely needed.

A few days later, I wanted to indulge a little more and try some similar cooking, so I stopped by J. Gumbo’s, one exit north of us between I-75 and I-575. This is a small chain based in Ohio, with about thirty stores in seven states. It’s not even close to the personal, individual attention of Henry’s place, but for a reasonably priced and spicy lunch, it was not a disappointment. 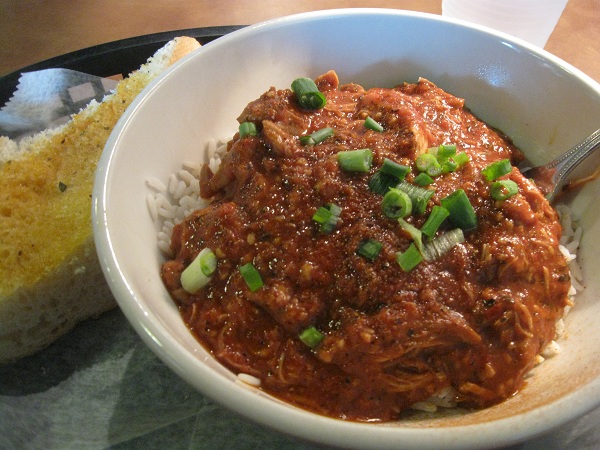 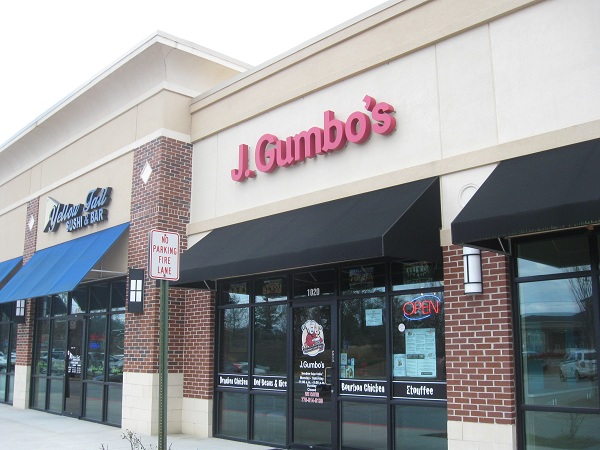 The local J. Gumbo’s store, apparently the only one in Georgia, regularly shows up at the regional “Taste of” festivals, with its gaudy Mardi Gras decor and plastic beads. The interior is a small and serviceable fast food design, spiced up by paintings of jazz players on the walls. The staff are quick to offer samples of all their lunches to guests. Most of their meals are served over rice in a big white bowl, and priced under $7. Their most popular dish is the drunken chicken. Like the spicier voodoo chicken that I enjoyed, these felt like a strange melange of styles. True, there was no curry evident in either, but it had a similar consistency to what you might get at an Indian restaurant in town: a bowl of tender, pulled chicken in a thick gravy, served over rice. That wasn’t at all bad for a quick lunch in the area.

(Update, 4/19/12: Unfortunately, I drove by J. Gumbo’s today and found them shuttered. Now, y’all are supposed to make sure that the restaurants we feature here stay in business! Shame to see them go.)