A local blogger who goes by the handle Maple Lane dropped me a line, noting that Beetles BBQ in Woodstock had not made its way onto our pages. This wasn’t entirely an oversight; I visited once, many years ago, when Bill Beadle still owned it, and didn’t have a really great experience, but, in fairness, that was more to do with a personal disagreement at the time than with the food. I’ve mentioned here before that it’s never, ever, ever a good idea to try a new place when you’re not happy about something or with somebody. It overpowers your memory of the food. So, hearing that Beadle had sold his business to a fellow named Satterfield, who’s lowered the prices, and remembering that it’s only fair to give places another try, I agreed that I should get back over here.

Around the same time, an old friend named Kristal got into a brief online scuffle. I never saw enough of Kristal and her husband Jeremy when they lived here, and even less now that they are in Winston-Salem, where she is working on her master’s. You might have heard about the proprietor of an Atlanta barbecue establishment acting like an ill-mannered donkey online last month, attracting the attention of everybody from CNN to Chelsea Lately. Kristal was among those whom that owner elected to grace with some four-letter words, which is why that establishment isn’t going to get any of my money or time. Naturally, the incident being barbecue-related, she thought of me.

So she and I decided that the next time she was in town, good barbecue was required, especially as, picky eater that she is, she genuinely doesn’t know very much about the good stuff and needs some experience. A couple of Saturdays ago, we went up to Beetles, which is incredibly easy to find. From I-575, you take the Towne Lake Parkway exit and go east, towards downtown Woodstock. You can’t miss the old yellow bug with the smokestack out front. No, it isn’t just a curious and silly bit of roadside advertising; it is actually a full-service smoker. 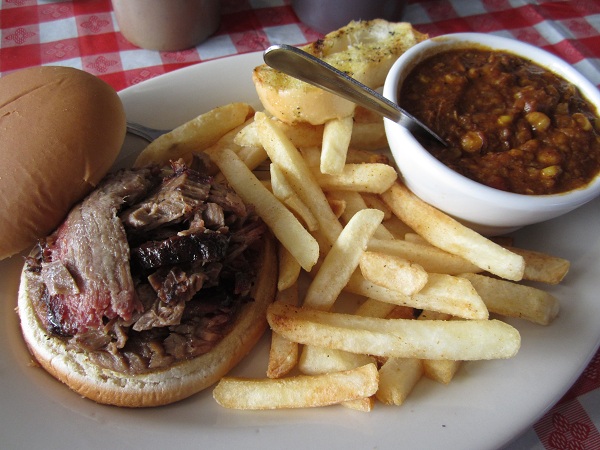 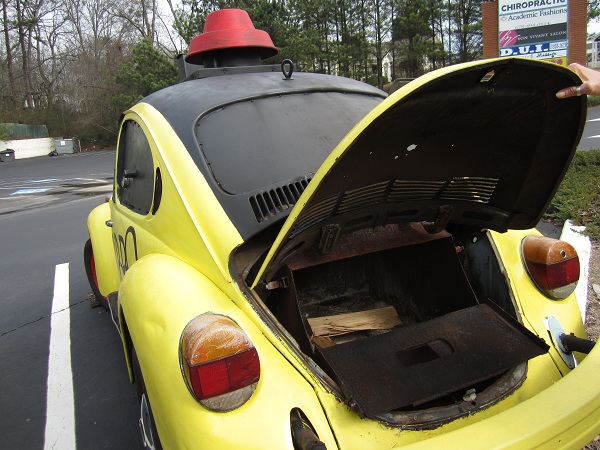 The “beetle” smoker is only used now for overflow and catering prep, but it gets hitched up and towed into service from time to time, where it looks a fine sight on the interstate, I’m sure. There is a larger smoker next to the building in a covered porch area, where pork, beef and chicken are typically smoked over white oak for at least 26 hours. They do whole hogs here, eastern Carolina style, and serve the pork pulled. Marie had a pork sandwich. Kristal and I each had brisket with stew and fries, and Jeremy had a half-rack of ribs with fried okra. At one point, the baby reached over and helped himself to some of Jeremy’s okra. We forced the issue, and made him stick to a saltine.

Sadly, the brisket was the least of the three meats that we sampled, forcing me into menu envy yet again, but happily Kristal was pleased with hers. The stew, thick with lots of corn in its tomato sauce base, was inarguably excellent, and the pork that Marie shared was just perfectly moist and with a fantastic flavor to the bark. I thought that the ribs were the best of all, and our awesome server complimented Jeremy on his fine choice, but Jeremy himself wasn’t completely thrilled with them, finding them fattier than he was expecting. What he shared with me, however, was really succulent and tasty, and the sweet sauce worked very well with it.

There are three table sauces. The thick and sweet cowboy sauce went best with the beef. There is also a thin vinegar sauce and a spicy mustard. Our server was kind enough to bring me an additional sample of the pork and I just drowned it with vinegar, finding it quite heavenly. I expect, now that she’s had a little introduction to barbecue basics, Kristal will find this the dominant style around the restaurants of Winston-Salem and Greensboro. But that could change; they may be on the move soon and could be in Huntsville, Alabama before the fall.

I know that if I only had seven months in Winston-Salem, I’d eat an awful lot of barbecue. That is an awesome launching pad for trips to all sorts of nearby places. Lexington, Greensboro, Raleigh and Fayetteville all within 120 miles? Heck, I might even find time to work on a master’s.