Goldberg’s flies under a lot of people’s radars, but they really are a special little place. The business is celebrating its fortieth anniversary this year, with half of that time under the ownership of Wayne Saxe and Howard Aaron, who purchased it from the Goldberg family in 1992 and began growing it to six locations in Atlanta. I think that their Toco Hills store is the most recent. It is not, to my surprise, related to a larger chain called Momma Goldberg’s, which is based in Auburn and has sixteen stores in Alabama and west Georgia. No, this place is a little older and hasn’t left its home city yet.

What you get here is a fairly typical New York deli experience. Its adherents swear that these are the best bagels in the city, and they have all the expected New York deli accoutrements like lox, capers, matso soup, and Dr. Brown’s soda, with sandwiches piled overpoweringly with more freshly-sliced meat than any jaw can comfortably manage. Or you can get a Po Boy like I did, and have a little less meat and a whole lot more bread.

Also, I was bad and ordered potato salad. What minimal control I have over my weight has come from increasing my exercise, drinking far fewer beers and far, far fewer sodas, and cutting out potato salad from my diet. At least in a barbecue restaurant, I have a plethora of promising choices and can easily avoid it. New York delis, on the other hand, seem to demand that I order it. It was pretty good, too. Every calorie-packed, ultra-fattening bite brought me a little nearer to death by obesity, but it went well with the sandwich.

Okay, I know that line was a little excessive, but it’s like how I curb my very occasional craving for a cigarette by remembering a line from Robo-Hunter about those things turning your lungs into “black, moldy tacos.” It keeps me off the cancer sticks and it limits me to maybe one side of potato salad a year. Some years, I don’t even turn the bowl upside down and lick it clean. 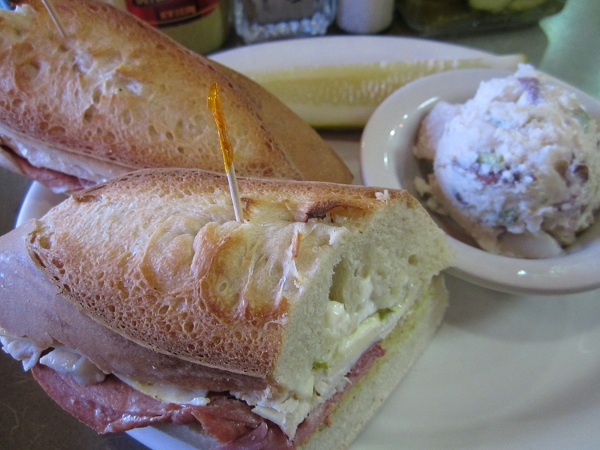 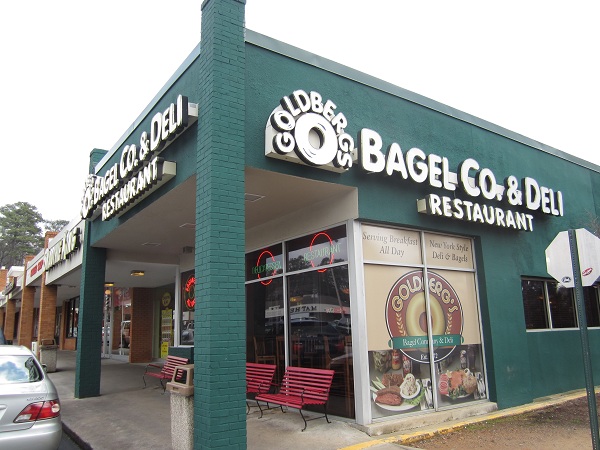 I have mentioned before that I work a very unusual schedule, and some short days I go in very early and get off very early. This works out fantastically if I’d like to go out of town for the afternoon, or go back to Cobb County and get a little housework done before having lunch in the ‘burbs, but it often means a little thumb-twiddling and reading a book under a tree somewhere if I want to have lunch ITP. Gas is just too expensive and money’s just too tight to go back and forth on I-75 any more than necessary. So I am very happy about places like Goldberg’s that open for breakfast and serve lunch all day. I’m sure that nobody else wants a light breakfast at five in the morning and lunch at ten but me, but I appreciate it.

The experience was solid and simple. The service was good and attentive. There’s a nice little perspex cube on each table full of sweet pickles. I helped myself to, perhaps, one or two more than my fair share. I really appreciated the chance to enjoy a good sandwich with tasty pastrami and linger over a good book for a while, and not have to wait around for an hour or more for lunch. It’s always nice to know that there are one or two places out there willing to accommodate the more unusually-scheduled members of our town this way, isn’t it?

So, the following morning, I wrote up a first draft of what was going to be a standard little chapter about Goldberg’s, and found myself a little uninspired. I couldn’t focus on much of anything but the potato salad. As I typed a little, I found myself wanting potato salad more and more. Fortunately, I would not have the afternoon free to do anything stupid. I had an event to attend at my daughter’s school, and, while they were going to feed us, I was at least a little certain that I could avoid the sort of potato salad that they make for school lunchrooms. Just my luck, then, that lunch was a cookout, with grilled hot dogs and hamburgers and about a seven-gallon bucket of glorious, tempting, glow-in-the-dark yellow potato salad. Mistakes were about to be made.

They were waiting for more burgers to come from the grill. “Why don’t you take a dog and some ‘tato salad while they’re cooking, and come back for one,” the server asked. I nodded acceptance. The gigantic spoon of potato salad, larger than any spoon we own, slapped something like a faceful of the stuff onto my styrofoam plate. It buckled under the weight. My daughter, who is too old and too cool to call me “Daddy” in public anymore, said, “Hey, come sit here.” And so I sat, considering what I know of the recipes and caloric content of potato salad. This will vary quite wildly, depending on, for example, how much mayo is in it. This seemed to have a little more mustard and a little more egg than mayo, so I felt comfortable slotting it on the lower end of the scale, say “merely” 325 calories for about one cup of it. The problem was that the nice woman gave me what appeared to be about five cups’ worth of the stuff. This wasn’t a plate that I was needing to clean.

In fact, I did well. I had three spoons of the wonderful stuff, loving it like most people love ice cream sundaes, and then heard the call that burgers were up and hot. I discreetly covered the remaining spectacle of a “side” with a napkin as though hiding the face of the recently deceased, and helped myself to a burger with lettuce and tomatoes. And that, I sincerely hope, will be the last potato salad temptation for many, many months.

But while I’m not thrilled with Goldberg’s opening up that potential disaster, I do have their West Paces location to thank for my daughter’s dessert the following evening. I noticed on that first visit that they have a window open where they serve ice cream treats and Dippin’ Dots. In perhaps one of the worst puns in restaurants, Goldberg’s ice cream window is called Iceberg’s. Sadly, it is not open any later than the five or six pm that the deli is open. Happily, though, the frozen yogurt shop three doors down is. It’s called Yogurtland and it’s the first Atlanta store, of three, in a national chain of 180 or more stores.

Amy on Food stopped by last month and was taken by the experience and the pricing. My daughter had eaten very lightly at dinner and had been on fabulous behavior for a couple of days, so I told her to go wild. She had a little bit of pistachio yogurt and a little bit of something that only a thirteen year-old girl could possibly think would mix well with pistachio yogurt, and then buried it all under a mountain of toppings. Everything from white chocolate chips to blackberries to Cap’n Crunch and Fruity Pebbles covered her selection, like fries and rings “a’plenty” cover burgers at Spartanburg’s Beacon. I was pleasantly surprised that it was so inexpensive, coming to under four dollars.

Frankly, I can’t imagine how such a mess could possibly be any good, but she yummed and nommed from the back seat and was quite appreciative as we drove home. She asked whether we can stop back again. Maybe she might be due another trip as a reward for me being good with potato salad.

One thought on “How Goldberg’s Derailed My Potato Salad Willpower”