A few weeks ago, I started wondering again about Hudson’s Hickory House in Douglasville, and their buckets of thin, red, barbecue “juice” sauce that have found considerable popularity at about a half-dozen restaurants in the region. I wondered whether more barbecue joints in the western suburbs follow this path, and I also noticed that Paulding County is shockingly underrepresented among the area’s bloggers. So, a couple of Saturday evenings ago, Marie and the children and I went out to Dallas to try a place, and stumbled past another on the way home. We found some pretty good food, albeit nothing really extraordinary and nothing that follows the Hudson’s template, and, as far as our health goes, pushed ourselves just a little too far, leading to some unhappy and grouchy folk who just wanted to go home.

After our trip to South Carolina, the baby spent the week unhappy with a tough case of RSV. For him, it was worse than a cold and not as bad as a flu, starting things off with a croupy cough and mild fever, and, by the weekend, leading to albuterol treatments with a nebulizer and mask. Marie and I each took time off from work to stay with him. By Saturday evening, she was exhausted and I was pacing the floor restlessly. We must go out! Damn the torpedoes! The baby’s feeling a little better, so let’s go! So we chased the sun down heading west out GA-120 and arrived at the Hickory Hut just after dark. This place opened in 1965 and is still family-owned. It’s a really basic old cinderblock building, neat only to those of us who enjoy really basic old cinderblock buildings, in the shadow of Paulding’s courthouse on one side and the hospital on the other. This place is said to get amazingly packed at lunchtime. 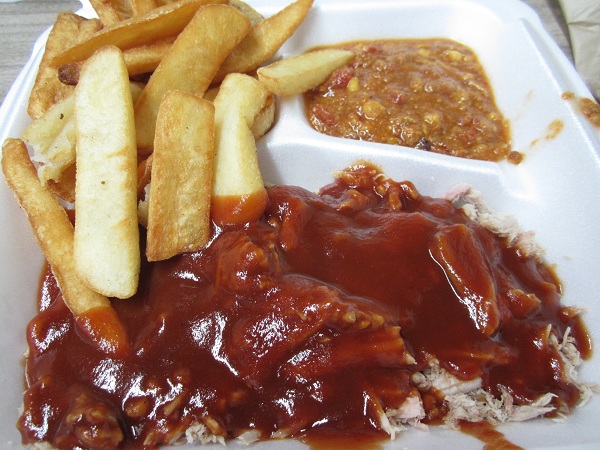 It’s only about half an hour’s drive from our house, but that was enough to do the ladies in. Marie and the girlchild both got in the car exhausted and became progressively more so as we made our way there, arriving in low spirits. Additionally, my daughter has a skin sensitivity to some cheap necklace, so when she wasn’t blowing her nose, she was scratching her neck and ignoring our pleas to stop before she made it worse for herself. Man, we needed some good barbecue to brighten things. What we got was pretty good. I wasn’t displeased with it, but it didn’t have the magic necessary to revive everybody.

I did not ask for my meat dry, as I was curious to see whether it’d be Hudson’s-drowned. As mentioned above, it wasn’t, though it did come drenched with a red sauce, just one much thicker than Hudson’s. It’s like a tangy ketchup, and goes equally as well with the steak fries as it does the pork. The Brunswick stew is the classic, regional, orange-colored melange, heavy with corn, tomatoes and onions. I split the fries with my daughter, who otherwise only wanted a fried peach pie, and also had a small cup of slaw. Everybody was satisfied, if not inspired.

If I were a little more sensitive, I might have just reversed our course and gone home, but I decided to just take the conveniently-named Dallas-Acworth Highway home. (This road intersects, at one point, Acworth-Dallas Road. Don’t tell me that people don’t get confused by that.) Some nights, you just really need to drive, even if other people just need to sleep. This path took us past a much newer barbecue restaurant, Rodney’s, but, in deference to my family’s desire to be home, I just got a to-go order. And my daughter conned me into another dessert. I’m sweet that way. 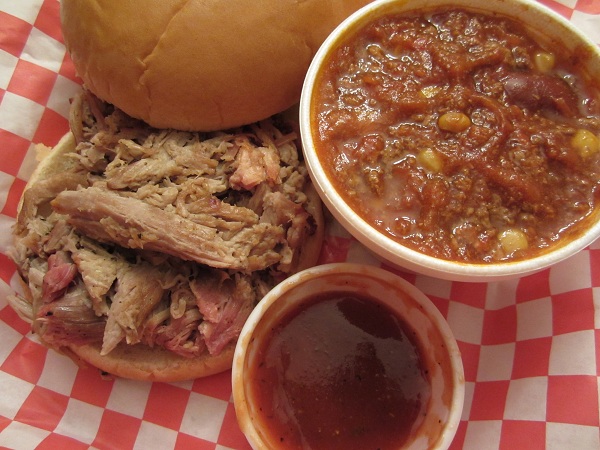 Our server told me that Rodney’s opened in 2006. It appears to have taken over what had been an old El-This-Los-That-style Mexican place, and turned it into a good, solid, family restaurant for the community. It has a really thick menu that emphasizes barbecue, but also offers everything from burgers to ribeyes to cheesesteaks, all done with a Six Flags Over Texas “wild west” theme and lots of ads for area businesses, who can rent billboard space on the interior walls for a C-note a year. It reminds me of what Atlanta’s storied Old Hickory House had been in the 1970s and early 1980s, except that Rodney’s is much, much better today than the poor shambles of Old Hickory House.

The pulled pork, again, doesn’t really get much better than “not bad,” but the interesting point was the cowboy stew. I asked what the difference was between it at the Brunswick stew, and the server didn’t know, so she went back and asked. Apparently, Rodney’s Brunswick stew is made with beef, pork and corn, and the cowboy stew is made with beef and red beans. In other words, it’s chili. Except that it’s not, because Texas chili isn’t made with beans, and consequently the chili on this Texas-themed menu is prepared without them.

We got home, and Marie went to bed. The cranky baby stayed up with me and watched a New Avengers episode that guest-starred Peter Cushing. I figured the least I could do for Marie after insensitively keeping her out on a silly long drive was let her sleep, and not insensitively make her watch mediocre seventies action TV.

One thought on “The Hickory Hut and Rodney’s Bar-B-Que, Dallas GA”