I first visited the Hickory Hut in Dallas GA almost four years ago. I was looking to expand our coverage of barbecue in Atlanta’s western suburbs, but picked a lousy night to do it. On that occasion, Marie was exhausted and the girlchild was in a particularly rotten mood, and while the food was pretty good, it probably would have been kinder to postpone the drive out to Paulding County.

This time (mid-October), there was no such unhappiness. Owing to some staffing issues, Marie had been working occasional Saturdays more often, and the girlchild had a part-time job, so my son and I had more and more opportunities for just the two of us to go driving and get some barbecue somewhere for lunch. While I was looking over older blog posts, that account of our less-than-thrilling Saturday night at Hickory Hut stood out as something worth revisiting, particularly as the restaurant is celebrating its 50th anniversary this year. Russ and Sherron Craton bought the business in 1965. It had actually been around for a few years prior to their purchase, but this is one of those uncommon restaurants that dates its founding to a later change of ownership. Their slogan is simple: “No phone, no sign, open at eleven, closed at nine.” I love it. 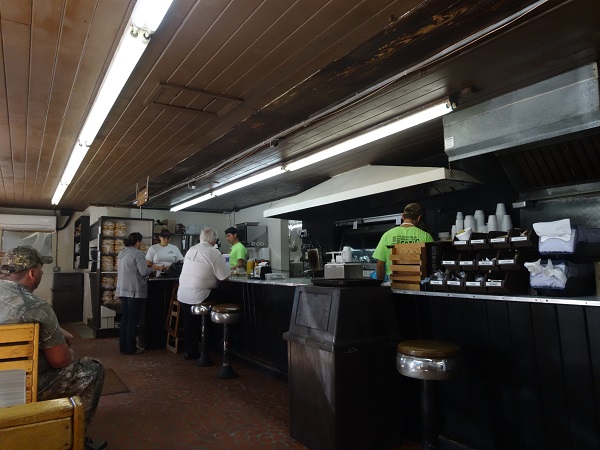 For many years, the pork at Hickory Hut was smoked indoors. You can see the vent in the photo above, behind the counter. (You can also see an infernally-placed trash can right in the middle of the counter. I was tempted to move the darn thing to take the picture, but that might have been a little silly.) These days, they have moved to outdoor smoking in a steel upright. I was pleasantly surprised to see that it’s a J&R Oyler. There are not many of those in the Atlanta area. 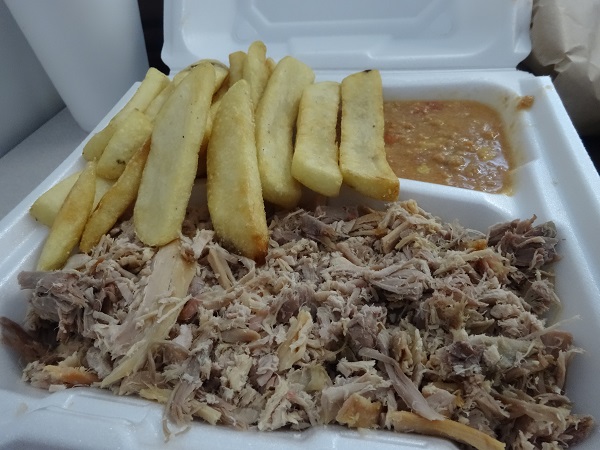 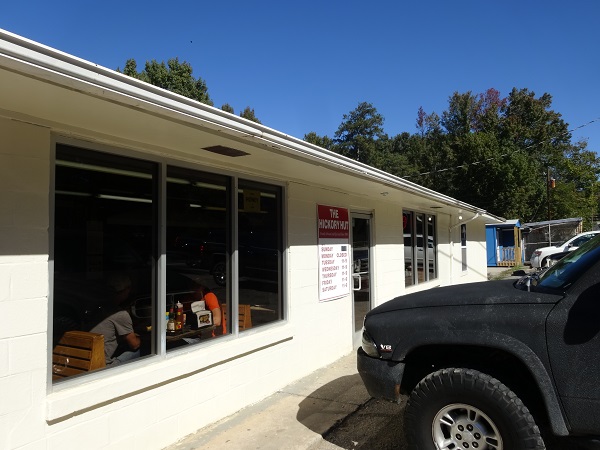 The pork plate typically comes with a ladle of their sauce, which is of the thick ketchup-based variety, and it comes with steak fries and a too-small serving of their really good stew. Actually, that reads as a little churlish, especially since they’re extremely generous in how much chopped pork they give you – and at a really reasonable $7.69 – but it’s such a tasty stew that guests are certain to want a little more of it. The pork is quite similar to many in the broad umbrella of what I call the “classic Atlanta” style. The meat is really mild. It’s dry, just a little bit smoky, and the flavors are very subtle.

When you ask for the meat dry, they give you the sauce in a bowl, warm and steaming. I was reminded of my meal at Ray’s Bar-B-Q in Atalla AL earlier in the year. The meat and the served-warm sauce are very, very similar. Ray’s also dates to the 1960s, and a few other old-timer barbecue places like this also share the texture and the flavors. This is definitely old-fashioned barbecue. It’s very popular with the locals, with lots of families having lunch together. We were in a small room to the side, which looks to have been added as an expansion, and I overheard one couple, waiting for their friends, wonder whether the other party had misunderstood the plans and gone to Briar Patch instead!

My son was so incredibly cute. He just wanted to share my steak fries, and have a bag of potato chips. (I swear, this kid eats really, really well when Marie cooks. Lots of fruit and vegetables, honest.) Guests arriving at the Hickory Hut line up at the register to place orders, and pass menus back for people further back in line to decide. Usually, I get a side of baked beans for him, but they don’t have those here. They do have Coke products, and when he saw the Sprite logo, he punched the air with similar enthusiasm to how I would react if I saw a logo for Buffalo Rock or Moxie or something. “Dad, they have Sprite,” he bellowed in excitement, hopping from foot to foot. Who would deny a four year-old such a simple pleasure when it made him so happy?