I really got a kick out of how the Alabama Department of Tourism declared this to be “The Year of Alabama Barbecue,” and so I resolved to make one more swing through the state to sample some good chopped pork. I looked around for the best opportunity for a quick day trip with four or so places I’d not been before and home by sunset. I picked pretty well. One of the four was on the state’s list, and two more were on the inaugural edition of Governor Bentley’s Alabama Barbecue Hall of Fame, as announced in June. The newest of the four is thirty-nine years old. A lot of history on this drive, as you’ll see.

Marie was out of town this weekend, down on Saint Simons helping her mother pack up to move to a smaller place. The children and I left Marietta at 9.30, and dropped the girlchild off at the Gadsden Mall two hours later. From there, it was a short drive down I-759, an interstate that I don’t think that I knew existed before this trip, and south a mile on I-59 to the town of Atalla. I found Ray’s Bar-B-Q very easily. It’s a simple hop off the road for anybody traveling between Chattanooga and Birmingham. 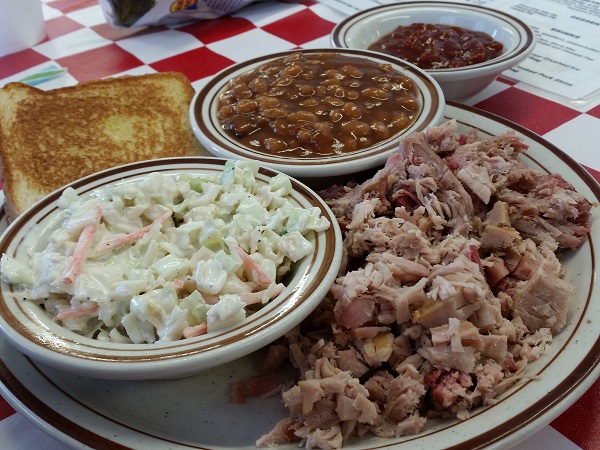 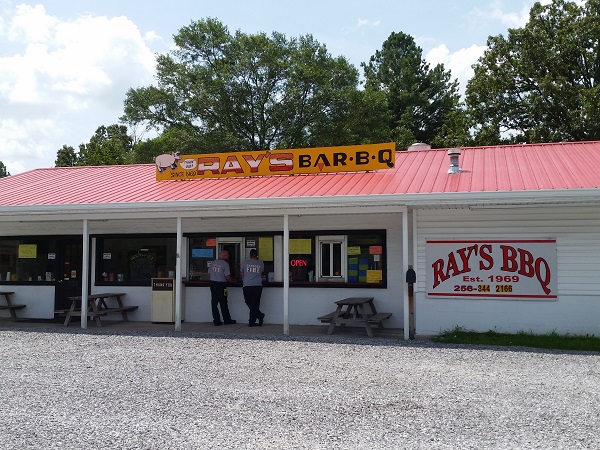 Ray’s opened in 1969 and they smoke their pork in a Southern Pride that’s outside the building. It’s not exclusively wood-smoked, however. A propane tank is attached to it. That’s never a welcome sign, but the pork is nevertheless very tasty However they mix the gas and wood, there’s still a nice bit of pink, a mild smoky flavor, and it’s moist and rich. It’s usually served with a ladle of the house sauce, which is a sweet ketchup-based variety. It’s served warm, which you don’t see often, and since I asked for it on the side, they gave me a piping-hot bowl of the stuff. I ordered the pork with baked beans and cole slaw. I’ll admit that neither of these completely thrilled me, but I shared the beans with my son, who inhaled them along with a bag of Golden Flake chips.

An even bigger treat awaited him when we left. On the roadside, there was one of those advertisement “sky puppets” by the street – one of those big inflatable people that “dance” when air is blown into it. I promised him that we would go and take a look at it when we left; it was ideally placed for me to stand next to it and take a couple of pictures.

As we walked across the gravel lot, a fire truck pulled in. Ray’s has a walk-up window for people like these two firefighters to order barbecue or any of the other burgers, sandwiches and milkshakes that they offer here. One of the servers had told me that their peanut butter milkshakes are amazing, but I already had a couple of milkshakes penciled in on this trip, so we passed on that with regrets and let my son ogle the fire truck for a few minutes. The car was already boiling, but I don’t suppose I have to remind anybody reading this what an awfully hot summer 2015 has been. Or was, if you’re Googling from the future. Hello, spacemen!