For the second stop on our mini-tour, I picked the closest place to me on the Year of Alabama BBQ app that I had not previously visited: Pruett’s in Gadsden AL. It opened in 1976 and a wonderful blog called The Great North Alabama BBQ Quest paid them a visit in the spring of 2013. Sadly, this blog is no longer being updated; the writer moved back to Europe last year, but it is a terrific resource.

Pruett’s continued the tradition of a majority of places that we visit in Alabama, and the Carolinas, serving Pepsi over Coke. Four of the five new restaurants that we visited on this loop were Pepsi joints, but only Pruett’s has a sign this amusing: 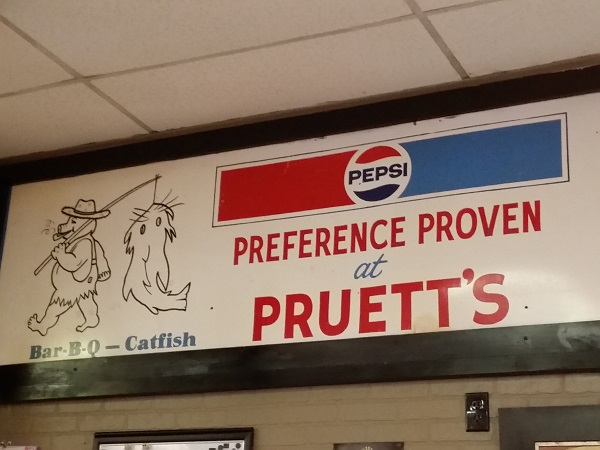 Pruett’s is the newest of the four barbecue joints that we visited on this trip, but it has very old roots. The Pruett family are the original owners of Anniston’s Goal Post Bar-B-Q, which closed in 2013 after a nearly seventy-year run with multiple owners, and also Betty’s Bar-B-Q in that town, which explains why the iconic neon sign from Goal Post relocated to Betty’s. I also noticed that Pruett’s and Betty’s share a mascot. You see him on that Pepsi sign above, the pig in overalls having caught a big fish. Although I can’t help but notice that the 1970s version of the pig on that sign is smoking, and his modern incarnation doesn’t have a pipe. Since the Goal Post’s final owner, Lamar Phillips, had such a bad experience with the anti-smoking ordinances in Anniston, I find that appropriate!

As for the food, I confess that when I read that Pruett’s and Betty’s have such a close link, my heart sank a trace, because my end-of-the-day meal at Betty’s a few months ago was not bad, but hardly thrilling. Happily, the sandwich that I had here was much, much better. (I should note that the techniques are a little different at each place, because while the links between the restaurants are familial, there is no hands-on sharing of management or pit procedure.) I said at the time that I didn’t give Betty’s a really fair shake, and that no barbecue place does its best work at the end of the business day, but I truly didn’t get a feel for the place. Pruett’s, on the other hand, I got a very good feel for. It’s a huge restaurant that feeds more than a hundred at a time, great big mobs that come for barbecue and seafood. Carry-out orders are managed in the small building next door, called Little Pruett’s, because there isn’t room for them at this incredibly and justifiably popular place. 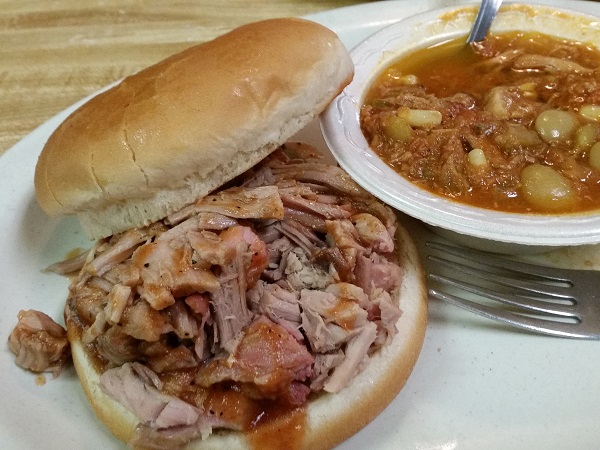 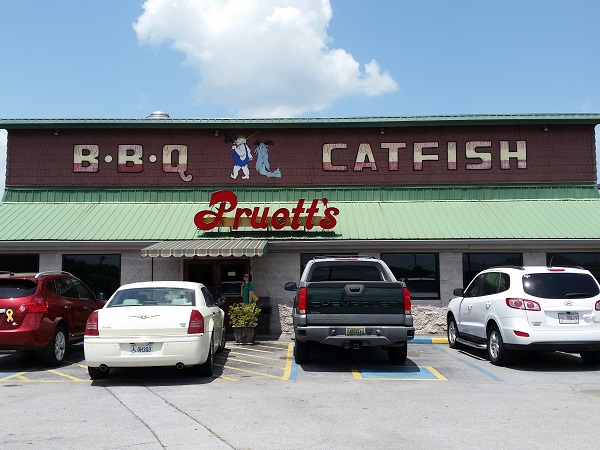 I had a pork sandwich and a bowl of Brunswick stew, which was a better bowl of stew than what you usually find in Alabama, full of meat, thin, although with a few more lima beans than it really needed. The barbecue, sadly, is served with the sauce – “it comes with sauce,” my server told me when I asked for it dry – but happily, the sauce is a mildly sweet tomato-vinegar blend that goes very well with the smoky pork. They use hickory wood in a pit built into the side of the restaurant. The taste of smoke was not especially strong – that would come a little over an hour down the road – but what I sampled was a really nice blend of flavors.

They do very good work at Pruett’s. This was my favorite meal of the day, and while I won’t claim that I would make a big detour to return, you can definitely see why the locals love this place. I’m very glad I picked this restaurant, and wouldn’t mind a longer visit if we are in the area again.

Incidentally, one final note regarding the restaurant’s name and mascot: I noticed that a whole lot of restaurants around Gadsden advertise that they serve catfish. The town is located on the Coosa River, between Lake Weiss and Lake Neely Henry, and there’s said to be some really good fishing around here. I like to see so many local restaurants serving locally-sourced fish. Good for them!