I left Leo & Susie’s ahead of schedule, and I’ll tell you folks, it is a good thing that I did because Birmingham’s rush hour turned out to be every bit as bad as I’d heard. I won’t complain about Atlanta’s again for at least three weeks. Complicating things up front, there’s about a two-mile stretch between not-quite-finished I-22 and I-65 that hasn’t been completed yet, and eastbound traffic exits onto a road called Coalburg, and absolutely everybody takes that down to 41st Avenue and cuts over. These roads were not meant for this volume of traffic. It’s like driving across trenches. Then you get on the I-59/I-20 connector and it’s every man for himself. For the rest of my life, I’m going to do my level best to avoid Birmingham Fridays between four and six.

My nerves were a little jangled, in other words, when I made it to Old Smokey in Leeds. I had driven past this place about two years previously when we visited one of their neighbors, Rusty’s Bar-B-Q. At the time, there was a third barbecue joint on this stretch of road, but Huck’s Rib Shack has moved north of the city, to the suburb of Springville. Old Smokey has been here since 1978, and they’re kind of feeling their age.

Rather than linger on the blandness of the food, I’ll note that I met the most interesting fellow here. He placed his order just as I took my first bite, and then we got to talking about how it was not as hot today as the day before. He said that he works with a road crew, however, and it is always hot. It’s not a bad job, and it pays the bills, but he sure does hope to start dancing professionally again. I’d have put money on this guy being a year or two younger than me. No, his oldest of eight children is five years older than me. And I don’t think that I look my age. Before I knew it, the guy was up and doing some wild 1970s Studio 54 dance with all the fluid grace of a well-trained teenager. I had to applaud him. That’s what I will remember about Old Smokey. 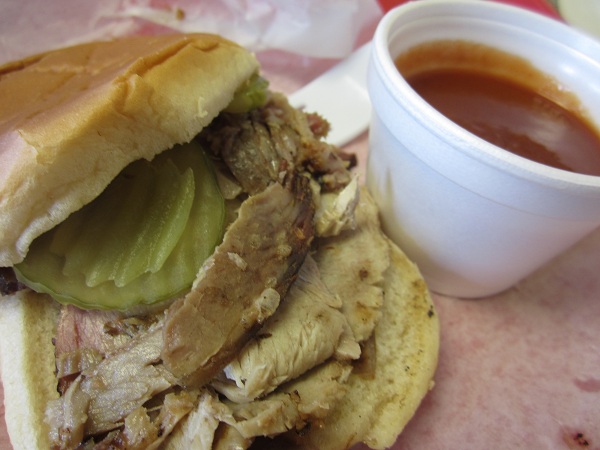 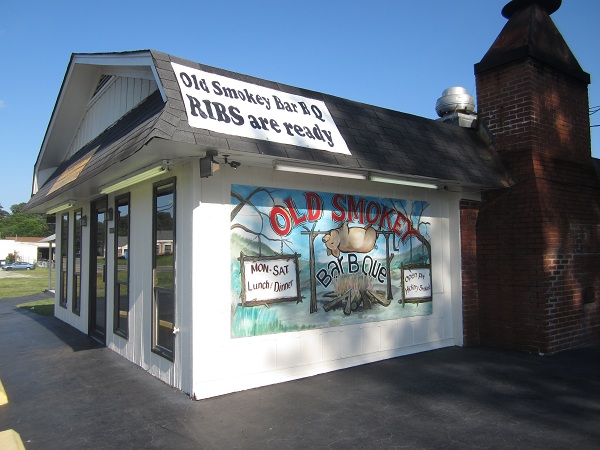 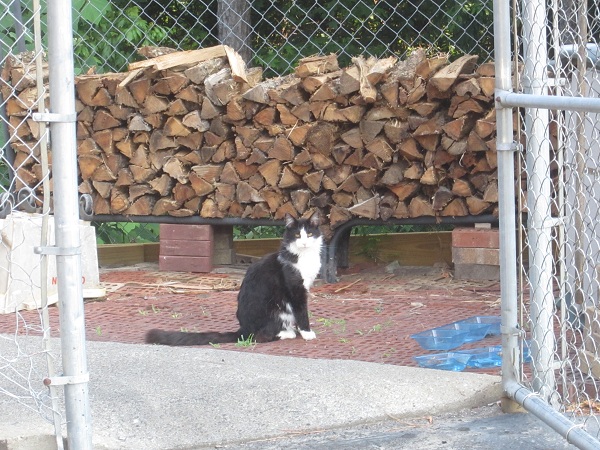 Well, that, and their guard cat. You have to love a barbecue joint whose wood pile is guarded by a cat.

Fortunately, I had a final stop to make that would ensure that the day ended on a high note with one last excellent meal. I had wanted to visit Goal Post Bar-B-Q in Anniston since two terrific sites that I enjoy featured it in the spring of 2011: Roadside Rustic and Retro Roadmap. They both visited on the occasion of the restaurant’s 50th Anniversary, by which time the state’s Department of Tourism had included the barbecue on their inaugural “100 Dishes to Eat in Alabama Before You Die.” (I would like to note my thanks to Crystal at Roadside Rustic for allowing me permission to use some of her pictures. Fortunately, enough survived from the SD card that none were needed, but hers are assuredly better and you should go see them.)

We’d hoped to stop by Goal Post last May, but a flat tire outside Birmingham delayed us and we were too late, arriving after they closed. The restaurant is not open on Saturdays or Sundays, so it has been difficult to work it into a schedule. So this was a long overdue meal and it did not disappoint. This is amazingly good barbecue. I didn’t even object much to the very slight smell of cigarette smoke in the air, thanks to a thousand-dollar black box hanging over the counter. 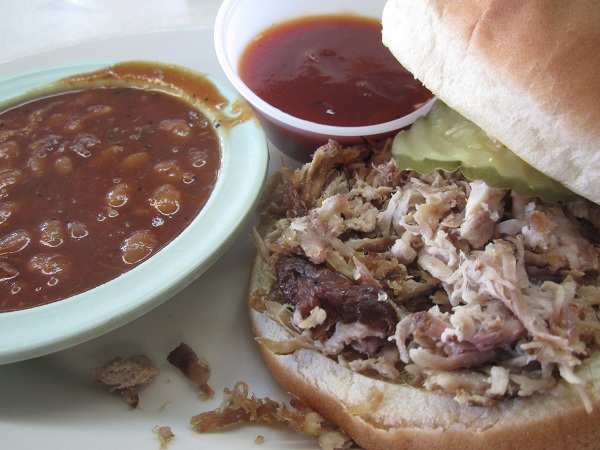 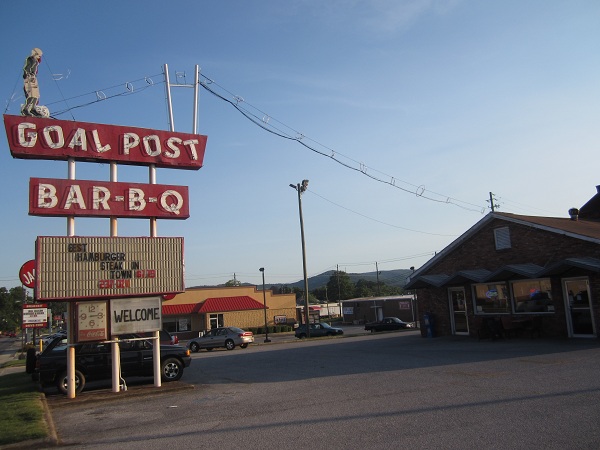 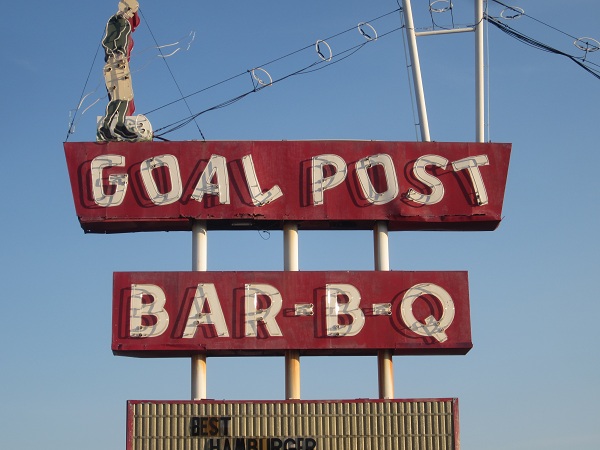 I spoke a little with Lamar Phillips, who has owned this place for the last several years. He explained that an Anniston city ordinance from a couple of years ago demanded that any restaurant that allows smoking had to invest in a big ventilator machine. Well, so far, so good. There only seemed to be two tables smoking, but I could barely notice it. I was pretty sure that, between this and Leo & Susie’s, my family would smell it on me, but that’s a separate problem. But Mr. Phillips has another weight on his shoulders, and that’s the newest incarnation of the city council, who recently decreed that the thousand-dollar ventilators were not good enough, and that smoking in restaurants will be coming to a end this year. Good for Anniston, and unfortunate for any business owner who made a thousand dollar investment to comply with the previous ordinance. And this just after Mr. Phillips paid to repair the gorgeous sign, which had been badly damaged in a 2009 storm.

If it wasn’t evident from the pictures, the sign itself was the main draw for coming by, although summer visitors won’t get to see it in action. It is an animated neon sign, with each of the “footballs” lighting up in sequence and traveling through the uprights and down to the roof of the building. I’m very glad that Goal Post will be smoke-free in the future, but I wish that the owner had thrown out the ashtrays two years ago instead of buying the box. Barbecue as magically good as this doesn’t need to smell like cigarettes, only hickory. I hope that the road brings us back to Anniston one day in the fall or winter. The Alabama Department of Tourism also insists that we try the smoked lettuce salad at the city’s Victoria Inn. Maybe we’ll arrange to have an early supper there while waiting for the sun to go down and have a big plate of barbecue after observing the sign in action.

After we do, we’ll certainly want some ice cream, and one of my favorite places for a dessert treat is the Tasty Dip in Heflin. We first visited this restaurant in the summer of 2011 – led, again, by a listing at Roadside Rustic – and I resolved to make another stop about a week before this trip. Without boring you with details, Marie and I were looking over our June 2011 pictures and I was appalled at how terrible our pictures of Tasty Dip were. “Heck, I’ll be driving right past in a week,” I said, “so I’ll stop and do better.” And get a banana-vanilla milkshake, that as well. Heaven smiled on me, and allowed me some good survivors from the SD card failure. These almost make up for losing all the ones from Trowbridge’s at the beginning of the day. 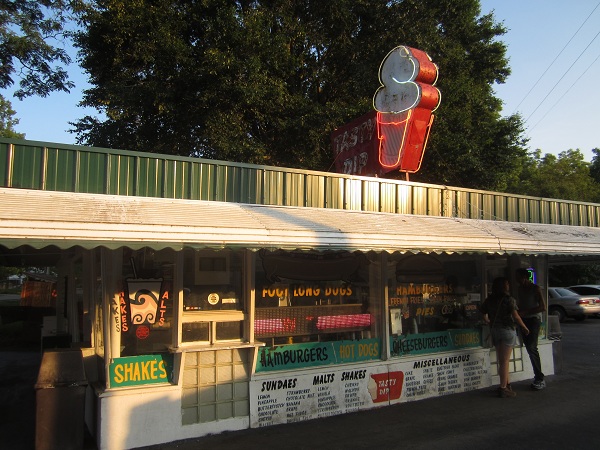 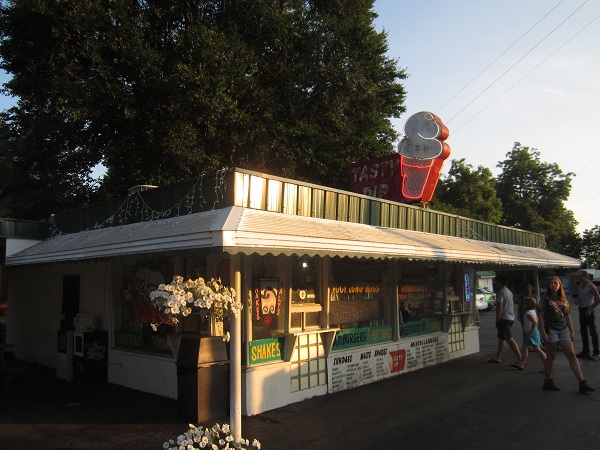 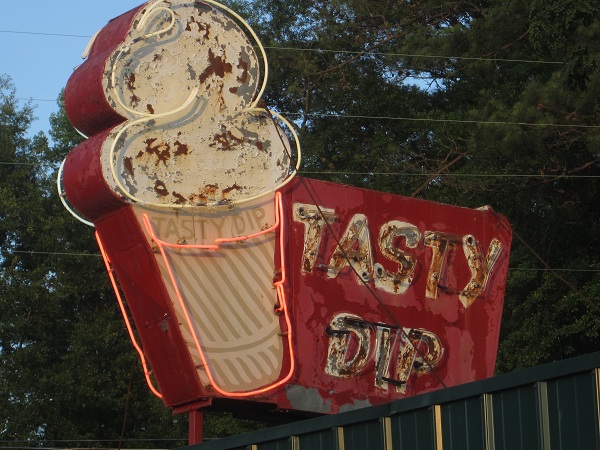 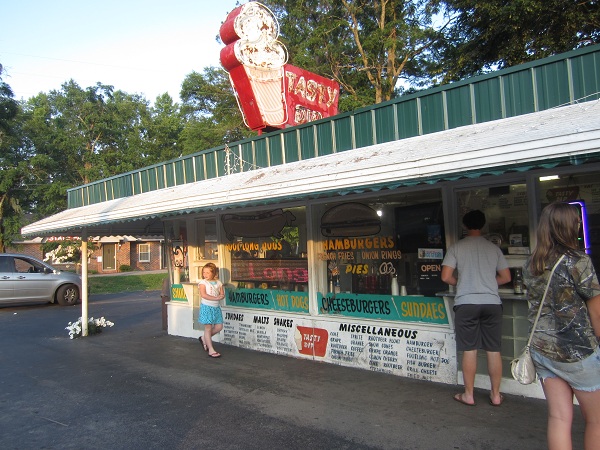 So that concludes this circumnavigation. It was 785 miles long and I had a blast, but I was happy to get back to my family, even if I did smell like cigarettes from those two places, and was sent to the showers immediately upon returning!

And then I started wondering where the road might take me next.