We’ve written many times before that we’d rather not linger on negative reviews, and if we visit a joint that’s just pretty good but otherwise uninspiring, we’d just as soon not spend the energy and time on it. But Rocco’s Pub is an unusual case. This is a joint that was once very good indeed, and took a sharp right turn into mediocrity around the time that we started blogging, and is now, perhaps, bobbing above the quality line again.

I distinctly recall an evening one summer four or five years ago where I finally allowed the family to come visit this place, which I had kept to myself for years. When I first found Rocco’s, it was in a different strip mall, the one next door to its current home. Then, the Town & Country Mall had an arcade plaza in the back corner. It was once the home of a movie theater – some kid’s birthday evening in 1979 or so included a John Travolta double-bill of Grease and the “now rated PG” edit of Saturday Night Fever here – and, later, one of the homes of a record shop – slash – bootleg CD emporium called Sounds Good, as well as the frankly unbelievable Rowan’s, an odds-and-ends place stacked to the ceiling with stuff that fell off the back of various delivery trucks, no questions asked. Rocco’s, named for its original owner, Danny Ciorrocco, opened in 1980 and was, within years, the stuff of local legend. The AJC’s hard-drinking Ron Hudspeth was a fan and champion, and Ciorrocco’s chili recipe won a state championship three years in a row.

I didn’t find Rocco’s until 2002, by which time its best years were certainly behind it, but for a good while, I enjoyed coming by for a few beers and a bowl of chili by myself. It was a good place to just get away from the world.

I’m not sure when things changed, but Danny Ciorrocco decided to move north to Pickens County. He sold the business to one of his employees, Chip Olshein, and retired for maybe a year, got restless, and opened a new Rocco’s Pub of his own up on GA-515. So perhaps it was in 2010 when the original Rocco’s in Marietta moved to its present home to make way for construction at the Town & Country strip mall that closed off that old arcade. Maybe Olshein was righting the unsteady ship when we visited. All I can swear to from this distance is that we ordered four things, waited forever, and didn’t enjoy any of them. We did not write about it, though. It didn’t feel right to kick an aging icon while it was down. We did that to the increasingly decrepit Old Hickory House just a few months after we started the blog and I still feel like we shoved an old lady with bad knees into traffic. 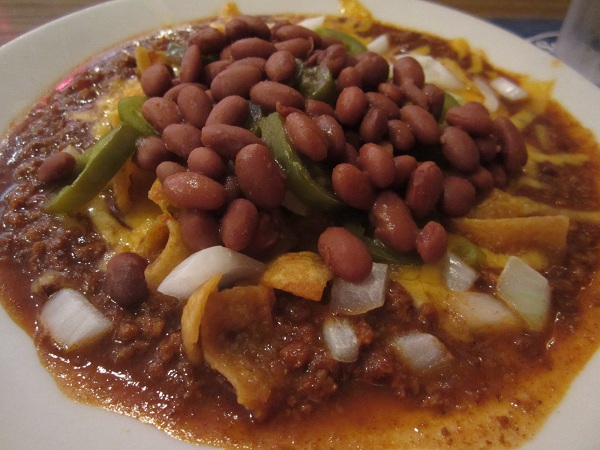 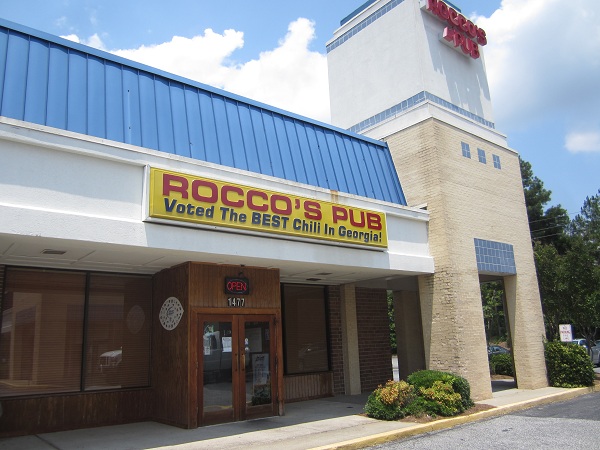 Things are better now, though they’re still a little ways from ideal. What I will say is that I had one of the best servers that any restaurant in Cobb County has ever sent to greet me. She was awesome. She was honest and apologized as I asked questions about what I might eat along with my chili, confirming that very little of the food on the menu is prepared to order. Salsa from a jug, fries from a bag, this just isn’t a place for people looking for anything that’s homemade.

The chili seemed better than it was the last time. I honestly still don’t believe that It was as good as I remember it, but the thin, finely-ground and meaty sauce tickled the nostalgia circuits. It was not bad, but the excellent server elevated it a good deal. If only the TVs were tuned to something else, it would have been a fine little getaway.

See, there were fourteen TVs visible from my seat. Three of them were on a baseball game, and eleven – eleven! – were tuned to Fox News. I figured that something stunning must have been happening in the world to warrant that kind of coverage. I caught the tail end of the host interviewing a senator from Utah about immigration, and then a lengthy segment, prompted by the death of James Gandolfini, in which various doctors urged viewers to go see somebody and get their prostates checked. In between and following these segments, the aging actors William Devane and Fred Thompson also urged viewers to refinance their mortgages and look into new term life insurance policies. Evidently, that’s what happened in the world that particular Thursday. Everybody got old.