Hello again, readers! Did you miss us? We had a good vacation down in south Georgia. This was not really a big eating tour, but we have a handful of chapters to share, but that won’t be for a while yet. We are still working through the remarkable backlog of stories from June. We’ll try to tell you about the couple of old places in Savannah and Brunswick that we saw sometime before the stores start selling Halloween candy. Definitely before they discount it.

Well, after doing this for more than three years from the same base of operations, you’d think that we must surely have exhausted possible new eating destinations in Marietta, Kennesaw, and Woodstock, but you’d be mistaken. We have a pretty neat shortlist of places in the area to try on Friday nights, and I decided that, once in a while, we’d alternate between letting Marie or the girlchild pick a place to visit after my wife fights the mean and awful Friday rush hour to get home. Marie said that a chicken place that I mentioned sounded good. This would be Pollo Tropical, a small chain based in Miami, which opened its local store in the spring. By chance, and not by design, the Heat had just won the Finals a couple of days previously. What better way to celebrate than having supper at a chain from Miami?

(If you have not figured out yet that, every once in a while, the hooks upon which we hang stories are occasionally just a little bit silly and/or bogus, that right there should be your final clue. I’m not about to celebrate the Heat winning the Finals because I don’t like them. I do not like any sports team from Florida. At all. Period. Unilaterally. I even hate the Tampa Bay Storm and the Pensacola Ice Pilots, and you’ve never even heard of them.) 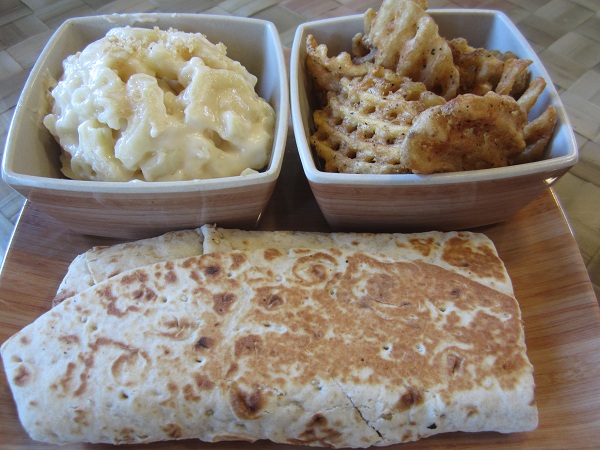 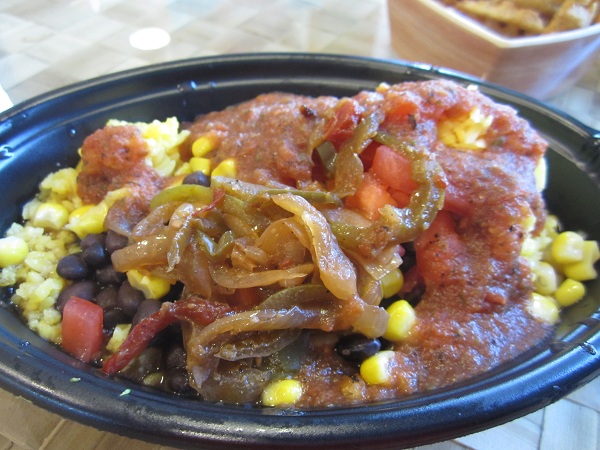 The first Pollo Tropical opened in Miami in 1988, owned by brothers Stuart and Larry Harris. They specialized in fast food grilled chicken. After ten years of slow expansion in Florida and in other nations and territories, particularly Ecuador and Puerto Rico, the Harrises sold the chain to its next owners, Carrols Corporation. Through the 2000s, Carrols concentrated on international markets, growing in Honduras and Trinidad while making baby steps into other Florida cities. By 2011, they finally made it as far north as Jacksonville. Carrols then split up at some corporate level to maintain synergy through bifurcation of assets while optionalizing their strategic stock portfolio buy-sell global initiative thing. Pollo Tropical is now owned by Fiesta Restaurant Group, who also own Taco Cabana.

Over the last two years, after blanketing central and south Florida with what appears to be upward of 75 stores, they finally made cautious steps north into our blog’s coverage area. There are two locations in Jacksonville and one in Tallahassee, and four stores in Atlanta’s northern suburbs: Vinings, Kennesaw, Alpharetta, and Lawrenceville. Nashville also has two in its southern suburbs, Smyrna and Franklin. 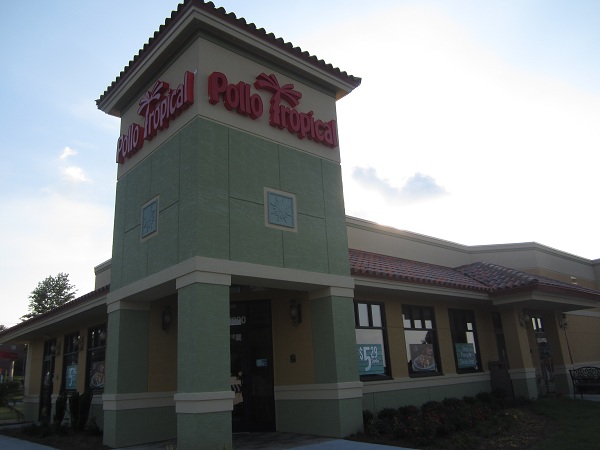 The consensus at our table was that it was pretty good and very reasonably priced. I found myself not actually in the mood for chicken, and so I had what they call a Tropi-Chop, which is your basic rice bowl with beans and other toppings. You can add chicken to it, or keep it as a vegetarian entree as I did. Marie enjoyed a pineapple chicken burrito, which is on special this month. The interior setup is like an upscale fast food joint, with a queue, a gigantic and confusing menu board, and a drink station, with the addition of a sauce bar – I enjoyed the curry mustard as a fry dip, but evidently really missed out on a cilantro garlic sauce about which some of our friends in the hobby have raved – and some fancy video screens showing off ingredients in slow-motion hi-def scrutiny. Servers bring out the food on proper plates with silverware, a very nice touch for what’s meant to be inexpensive fast food. The baby is still at the eating-cheap phase of development, but we still managed to do pretty well for $18 and change. Not bad for a Friday night.

Upon reflection, it is completely bizarre that the same corporation owns Pollo Tropical and Taco Cabana. This new place is super-clean, with expensive fittings and very nice dishes. The whole enterprise is as upscale as the fast food world can be before you start moving into the next category up, I guess. Taco Cabana on the other hand, if the lone Atlanta store at Cheshire Bridge and Piedmont is any indication, is a downmarket mess, dirty and sweaty and just plain awful, with tasty food somehow escaping through the slum-like conditions. How in the world the same company can own both concepts is beyond me.

The Kennesaw store was built over what had once been Bugaboo Creek Steakhouse, an absurd place that thought people might want animatronic, wall-mounted deer heads to talk to patrons and upsell desserts in between country songs. Pollo Tropical is a million times better than that, although if I had the choice, I’d probably go back to El Pollo Dorado. Then again, I didn’t think to try the cilantro garlic. I might have missed out.

Other blog posts about Pollo Tropical:

(Incidentally, I had a devil of a time trying to find my customary six good blog posts about this place, and, as you see, I gave up. I thought that I might find lots of Miami or Orlando bloggers writing about them, but didn’t. I have a suspicion that since most of the hobbyists down there grew up with Pollo Tropical as ubiquitous in south Florida as McDonald’s or Subway, it wouldn’t occur to any of them to write about it. While it’s still a small-footprint curiosity in other cities, it is one that most writers don’t look at twice since, curiosity or not, it’s a chain, and bloggers tend to shy away from writing about chains.)