You can’t miss this restaurant at the intersection of Piedmont and Monroe. It’s the place that looks like the two fellows from Miami Vice are about to beat up on the guy bringing in all the cocaine in his DeLorean. Taco Cabana has always been this garish, and that’s part of why they spent about six years in court defending their look.

In the late eighties and early nineties, this spot was occupied by a nearly-identical restaurant called Two Pesos. This was the only Atlanta location of a chain that had started in Houston in 1985. I ate here several times when I was in high school and when I came home during my first year of college. In fact, my very first car – and here’s an odd memory – died for good one night after a meal here. It was a wonderful, gigantic 1979 Oldsmobile Delta 88 and that great beauty would have driven me to Europe and back, had I asked. I was having car trouble all day, and fretted with two friends at Two Pesos what I would do if it couldn’t be repaired. Well, it couldn’t. It cranked twice more, once when I left the restaurant after a horrible, grinding shriek of metal, and once, for the final time, after it conked out again at a traffic light down the road. So Two Pesos was my last meal with that Oldsmobile.

What I didn’t know then was that Two Pesos was already years into a losing battle defending their business. Two Pesos had been started by some businessmen, allied with a former manager of one of San Antonio’s Taco Cabana stores, in 1985. Within a couple of years, Two Pesos had blanketed Texas with locations, and the much slower-growing Taco Cabana found themselves facing competition from a lookalike copycat which had established themselves in cities like Houston and Dallas, flinging locations as far afield as Colorado and Georgia to establish themselves ahead of where Taco Cabana could go.

So Taco Cabana sued Two Pesos for ripping off their look, feel, design, store layout and menu to such a degree that customers were left confused as to which came first. The Supreme Court eventually weighed in Taco Cabana’s favor. Left with a lower court order to completely reconstruct every one of their existing stores, Two Pesos elected instead to sell out to Taco Cabana. The Atlanta store was remade and remodeled into a Taco Cabana over the course of about an afternoon. 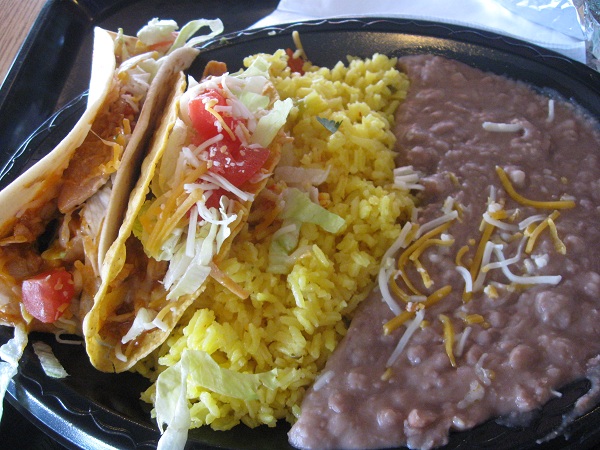 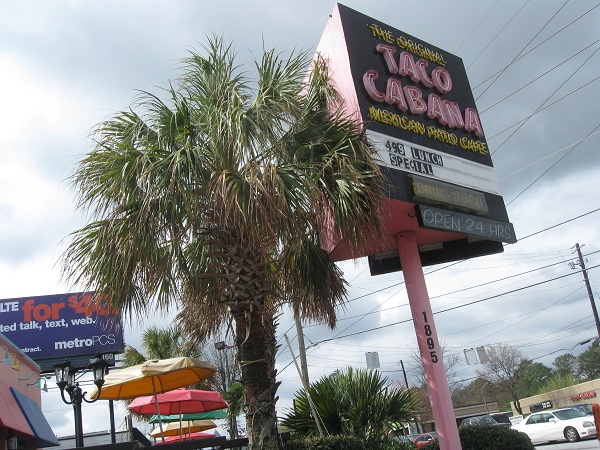 I’m not sure why I never popped back by the business, whatever its name, after that fateful evening when my car cranked for the last time. I remember they always had decent food at great prices, but the road just never took me by again. Well, not when I was ready for a meal there, anyway. Years and years passed and I read about the slugfest that the two restaurants had in court and figured that I should stop by again. It might make a readable story, if nothing else. Or something weird might happen.

Now, one thing that I didn’t like about my trip to Taco Cabana is that they don’t have chips, although they offer them. For ninety-nine cents, you get a pair of flour tortillas that you can rip into small pieces and eat with their tasty salsas. Somebody should tell that guy behind the register that those aren’t chips. So I had two tortillas along with a platter of two chicken tacos, rice and beans. I asked for one hard shell and one soft in order to sample some different flavors, and thought that chicken was very good for this sort of food. There was nothing very unusual or weird in my meal, but it was a step or two up from what you’d get at a similar place, and priced right. I liked the layout and the big patio space, which is probably quite fun and relaxing in warmer weather.

So then I went to my car and it would not start. I turned the key and nothing happened. The whole electrical system was not responding.

I know this must be impossible to believe, but twenty-one years after my Oldsmobile sputtered and died after I had a meal in this building, I came here for the first time and the hotdamned restaurant killed my Camry. You want to tell me the odds of that?

Turned out I had one of those very rare car problems that I can actually solve. One of the battery terminals had a loose connection. I avoided a freakout, shook my head in disbelief, popped the hood, jiggled it, bit my lip, tried again, thanked God and drove, nerves wracked, to my brother, who spent a few minutes replacing bits and tightening things and making sure I was roadworthy again.

I figure Taco Cabana is surely the safest restaurant in the city now. My car’s had problems there twice. It’s like Garp buying that house in John Irving’s novel after an airplane crashes into it. There’s just no way in the universe I could possibly have car problems there three times, right?