This won’t be a very long entry. I just felt it important to remind my readers in the Atlanta and Jacksonville areas – we haven’t visited any other towns with a Sweet Tomatoes – that, for the next two weeks, you can try one of the very best soups that any restaurant, anywhere, serves up. It’s the creamy tomato soup at Sweet Tomatoes, known as Souplantation on the west coast, and for many years, they have, criminally and haughtily, only offered this wonderful treat in the month of March and for one week in October. They serve the most mediocre chili every day of the year here, but only offer the tomato soup for just one month.

We hadn’t actually been back to a Sweet Tomatoes since we celebrated Neal’s and Marie’s birthdays a year ago. I said, then, that I’ve found the overall experience agreeable if unexciting, except where the soups are concerned. They have a few very notable ones apart from the creamy tomato, such as a shrimp bisque and a chicken lime thing, but our desire to visit many different restaurants rather than just stick with favorites over the last several months has meant that Sweet Tomatoes has been off our radar, and I never even checked to see what soups they might have offered anytime lately. But at the beginning of the month, the writer Mark Evanier, who brought this wonderful soup to the world’s notice, rang the dinner bell to tell his bajillions of readers, “Soup’s on!” So it was back to Sweet Tomatoes we went. 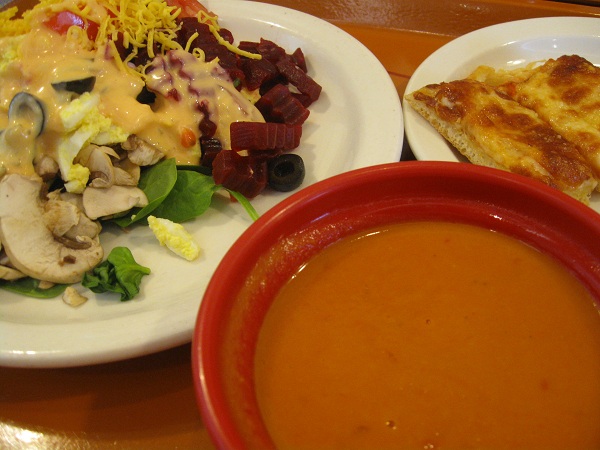 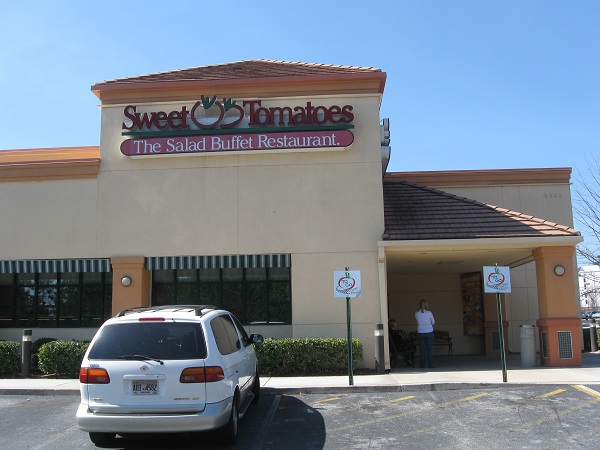 This past Saturday, Marie and I met up at the Dunwoody Sweet Tomatoes with our friends Victoria and James, who just moved to a new place in the East Atlanta neighborhood. Victoria suggested that we meet up for a meal again sometime, and I told her that it was creamy tomato soup month again, but she’d never heard of it, meaning that this restaurant still needs to work on getting the word out. Marie and Victoria are each in the later stages of their first pregnancies, and have a lot to share and talk about, although not necessarily soup.

Meals here are very reasonable. For nine bucks – seven if you join the “Club Veg” club for email coupons – you get all you can eat salads, pastas, freshly-baked breads and about nine different soups from which to choose. I typically have a medium-sized salad and three bowls of soup. This time, I had two bowls of the amazingly delicious creamy tomato and one of the almost as amazingly delicious shrimp bisque.

Creamy tomato is on the menu for just two more weeks. If you’re in a town with a Sweet Tomatoes, you should definitely make plans to get over to one as soon as possible. In Atlanta, there are four stores, all on the north side, outside the perimeter. With pollen ravaging the area and our sinuses, wouldn’t a nice bowl of delicious soup do you good?