With a heavy heart, we woke on Saint Simons for what we plan to be the last time in Marie’s pregnancy. This was the last long, overnight trip on the calendar until the summer. I slept horribly, and she not much better, and we ended up getting a later start out of town than planned, as she was not feeling at all well that Sunday morning. So we kicked back for an extra couple of hours to let her rest before giving our goodbye hugs and getting back on the road.

I was looking back over our writing in this blog and I see that I have only occasionally mentioned my biggest frustration and bugbear in the world of restaurants: the ones that are closed on Sundays. Having to work around the schedules of places that close their doors on heavy travel days really is a headache, especially when we have five hours of road to cover. Fortunately, The Georgia Pig in Brunswick, which we had been intending to visit for ages, does keep Sunday hours, thank heaven. It had gotten so bad that I had declared a blanket ban on Sunday travel in south and middle Georgia, but work schedules required that we get back on the road on the “closed” day. We even took a very different way home, via Glennville in Tattnall County, in the hopes of landing just one more possible barbecue joint on the way home, and were still stymied.

But The Georgia Pig was waiting for us, open seven days a week as it should be, right off I-95, where, for decades, travelers and truckers to and from Florida have been pulling off the road for some sassy attitude and some pretty darn good barbecue. 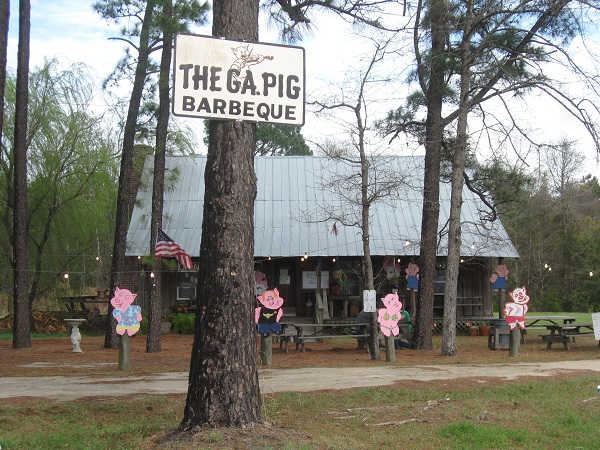 Reading around about the Georgia Pig, I’m struck by just how many people comment that this is a place with a frighteningly grouchy staff. There are many more reviews around, I think, for this place than many other barbecue restaurants of its vintage – it evidently opened in the 1960s or 1970s sometime – because while a large city like Atlanta has had a few standouts for years for writers and bloggers to decide to try on short visits, as far as chopped pork, Georgia Pig pretty much has had this whole stretch of interstate between Savannah and Jacksonville to itself for ages. There are two more places down the road in Kingsland that have opened in the last few years – G-Daddy’s and Jack’s – and a couple of barbecue places in Brunswick and on St. Simons Island for people willing to take a longer detour (Mack’s, sadly, has closed before we could ever get there), but Georgia Pig, in its tree-filled clearing behind a gas station right off the highway, has had all the press and attention, and all the fame.

It’s also picked up some decidedly mixed reviews among the volume of them out there. One point I will agree with the blogger Taco Bloggo (link dead) on is that, for a restaurant in a town that (most right-thinking folk say) gave name to a stew, the Brunswick stew here is just woeful. It tastes exactly like somebody opened a can of Dinty Moore and poured it over some frozen lima beans. It was, in point of fact, just about the worst stew I’ve ever had.

Now on the other hand, happily, everything else was very good. I’ll apologize for the lack of a food picture in this entry; the restaurant adopted a firm rule against photography inside after somebody’s flash once distracted a fellow behind the counter as he was bringing down a cleaver, and, frankly, these good old boys were surly enough without me trying to break a house rule.

Honestly, if you’re serving up chopped pork this nice, I’m not going to object to anybody being surly, and not break the rules. This was some of the smokiest meat that I’ve ever eaten. The sandwich is served on a toasted sesame seed bun, better to maintain consistency as sauce soaks through it, but I ordered it dry to get a really good taste of the meat without sauce. It was so packed with smoke that I’m wondering just how long they smoke the meat here. Probably the better part of a month, I’m thinking. The sauce is a mild and tangy tomato-based one, and it complements the meat perfectly. They also have a ridiculous array of bottled hot sauces available, but I don’t believe the chopped pork needs any. I also tried some excellent BBQ baked beans, as good as the best I’ve had elsewhere.

There are still dozens of restaurants in Glynn County that I would like to try, and ages, I hope, in which to try them. I’m glad to know that whenever the road demands us on a Sunday, this place will be around as a welcome substitute for whatever place we’d have preferred to try that ends up being closed on this aggravating, traveler-unfriendly day.

Update, 3/6/12: Sadly, it wasn’t even around long enough for a second visit. After forty years, the Georgia Pig closed in March 2012. The space will be taken by Saint Simons’ popular and amazing Southern Soul, who plan to open in April.

The above update never panned out. Southern Soul considered the idea, but the building was so far from code that it couldn’t be done. It has since been bulldozed.