Two of our old friends announced they were getting hitched, and that they’d be having a wedding hootenanny at a farmhouse near Jefferson. I said that was perfect, because there were two barbecue joints in Jefferson and one near Commerce, about a mile and a half west of the interstate, that I wanted to try.

Marie raised an eyebrow and reminded me that we would have plenty to eat at the hootenanny. It was a potluck, and she had been asked to make fruit salad, plus the bride’s family was going to be smoking a pork shoulder. We did not need to visit three barbecue joints in the area. “Well, we have to at least get lunch,” I said. “There’s no telling how long the ceremony will last.” For the record, it was the shortest, and possibly the most amusing, ceremony of any wedding that anybody’s ever attended. Just as well we only went to the one restaurant beforehand.

Greg and Mitzi Redd opened Redd’s Que and Stew in 2008. It’s a kissin’ cousin to The Redd House, a very nice place just a little closer into Jefferson that is owned by Greg’s sister Karen and her husband, Andy Marlowe. Both places are in an unincorporated community called Brockton, and I noticed them for the first time earlier this year, when I took GA-335 between Jefferson and Nicholson and visited a barbecue place called Cabin Creek. I said then that I’d make it back as soon as feasible, which is why this restaurant won out over the other two on my list of wants for the area.

I really like that they include stew in the restaurant’s name. It sounds like they’re taking particular pride in it. They should; the pulled pork is very good, but the stew is completely amazing. 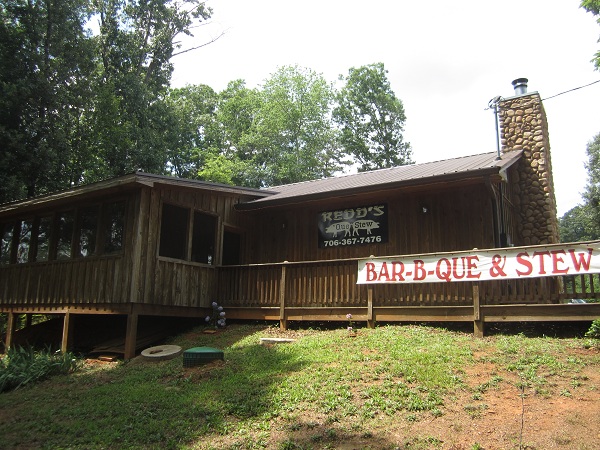 I asked Greg about his stew, which is thick and incredibly flavorful. He’s aware that there are more recipes for Brunswick stew than there are stars in the sky, but his is quite basic, with only six ingredients and a few seasonings: pork, beef, chicken, tomatoes, onions, and corn. Some people are able to create wonders with a few more vegetables, but the simplicity at Redd’s is what works for him. One day, I need to figure out a list of my ten favorite Brunswick stews in Georgia. This is on that list, as is Cabin Creek, just eight or nine minutes away.

Everything else on the menu is also worth a taste. The pulled pork is fine on its own, strong and smoky, cooked for sixteen hours over hickory in a large fireplace in the building’s kitchen. A superlative sauce is about the only thing missing. The regular sauce is a tasty enough brown one, but the hot sauce that they offer is, by Mitzi Redds’ own admission, “more warm than hot” and lacks a good bite. The other sides are just fine, and, grumbling, we passed on the homemade vanilla ice cream since we had so much food and cakes and things just a short time away.

The restaurant itself is in a lovely wooden building, surrounded by the cover of trees. The parking lot behind it, however, is unshaded gravel. In the summer, the sun beats mercilessly on the cars. As we unloaded the kids to go inside, we noticed a big, lazy dog hiding under a pickup truck next to us, as big, lazy dogs are wont to do on hot June days like this. Forty-odd minutes inside enjoying the nice food that we did here, we were kind of envious of the shade that the big, lazy dog was keeping to himself when we got back to the Mazda.