I’ve lived around Atlanta long enough to remember when everybody in the city gave a collective sigh of relief when the gigantic old Sears catalog distribution building between North and Ponce was repurposed as City Hall East. Just as long as something, anything, was putting that big old space to good use. Sadly, City Hall East only lasted for about twenty years and never used more than a third of the space; budget cuts during Mayor Franklin’s day forced the closure of the facility, and it sat idle for another five years. Earlier this year, private developers began turning the space into condos, with a mall and food court called Ponce City Market on the lower floors, and quick access from the shopping area to the Beltline.

Following the template laid down by the Sweet Auburn Curb Market, and perfected by Krog Street Market, the restaurants at Ponce City are local independents, with many very interesting concepts at work. There’s something coming up from the owners of Chai Pani, and once it opens, I will return just as soon as it’s feasible, because I love Chai Pani. But this trip on a Friday evening was for chicken. In October, Andy from Burgers, Barbecue and Everything Else raved about his meal at Hop’s Chicken, throwing down the gauntlet and declaring this the best fried chicken in the city.

Is it? Very, very nearly. If only Gus’s had not opened, it assuredly would be. This is definitely the best non-Gus’s chicken that I’ve ever had in Atlanta, and I’ve had some downright great chicken in this town. 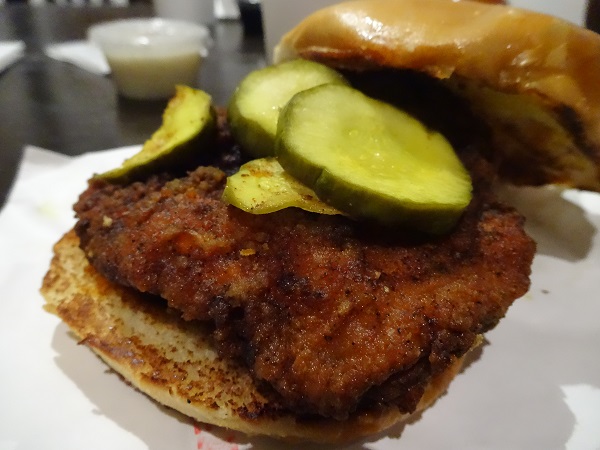 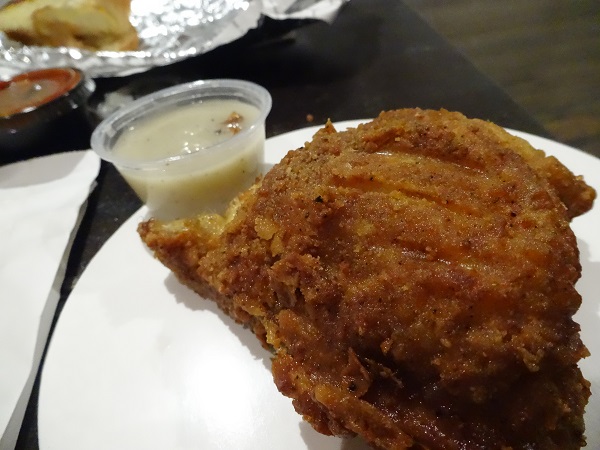 The restaurant, like its neighbor H&F Burger next door, is a concept by Linton Hopkins. The menu is very simple: it’s just chicken and a few sides. Marie and I shared a half bird with an extra drumstick, and a “Nashville hot” chicken sandwich, and it was all very delicious.

I really enjoyed the way the sandwich was made. It’s like Hopkins looked closely at the spicy sandwich at Chick-fil-A and concluded that he could improve on it in every direction, and then served it the same way that the fast food empire does theirs, in a foil bag. It’s so good, with a lip-tingling cayenne bite and the crunch of house-made pickles. I didn’t think that the sandwich was all that hot, but man, was it ever good.

We only ordered the sandwich “Nashville hot,” enjoying the rest of the chicken as it’s normally seasoned. The skin is incredibly crispy, and the meat really tender and juicy. We loved it completely. It will be very, very hard to pull myself away from a bucket of this to try something else in the market. Even Chai Pani’s sister restaurant is going to have a lot to live up to! 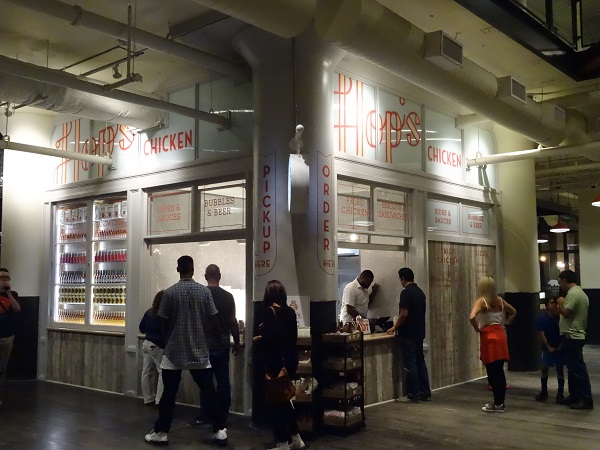 Is there anything else that will bring us back to Ponce City Market? (Isn’t Hop’s enough?) Well, there’s a stationary store called Archer Paper that caught Marie’s eye, and I imagine that we might want to try some of the other places in the food hall eventually. Marilyn from Atlanta etc. has written about several of the choices here (Check them out!) and many of them do sound interesting. Paid parking’s available at Ponce City – thirty minutes for $1. It’s unlikely you’ll need to spend more than $3, but bear in mind this place does get quite busy on weekend evenings as everybody’s coming by to check it out, and the lines at many of the restaurants will get pretty long. You may have to go back and feed the meter if you spend too long in line!