Readers with long memories and a habit of reading between the lines have probably realized that there has been some restaurant or other in downtown Athens where, for months, I have tried to have a meal. Well, not consistently; I only ever head to that great little city every six or eight weeks or so. Anyway, not knowing at first that the restaurant – which is only open for supper – has an outdoor “farm cart,” I thought that I might not ever get the chance to stop. Then I learned of the cart, and, in the winter, made two visits, found it shuttered and left, scratching my head. Eventually, I read that the cart is not open during the colder months. Then they delayed opening it this year. Then I stopped going to Athens during the week.

This is an awful lot of inconvenience for a blasted hamburger.

So when I charted my little two-day road trip, I knew that I’d at least be going through the Athens area, and by heavens, I was going to at least pull in and see whether that infernal cart was open and serving before I gave up and went to someplace like the recently-opened Hubee’s, or whatever Hilary at Flagpole was recommending this week. But you know what? This burger was so good that it was almost worth the headache. Plus I got to listen to WUOG for a couple of hours. 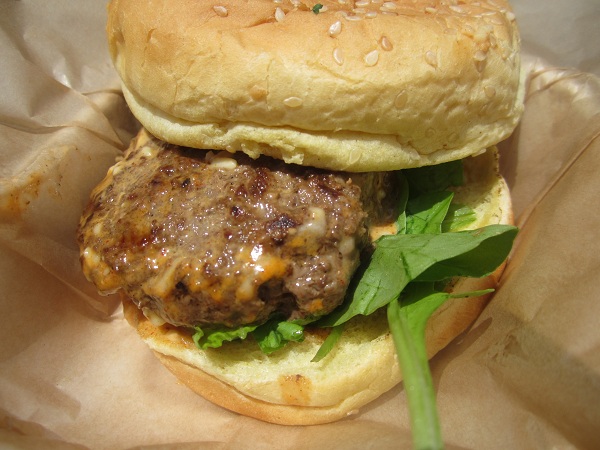 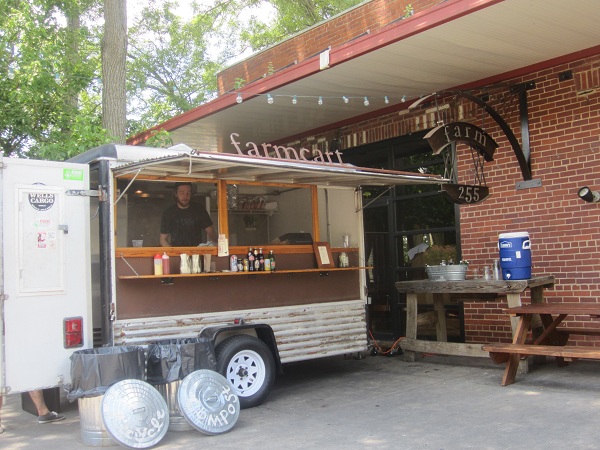 I arrived at 12.30 and learned a little bit about this highly-praised stand. The restaurant operates two farms, and contracts with several other local suppliers in an effort to keep things sustainable. They compost many of their supplies after use and, in the evening, have a very neat-looking menu full of great-sounding dishes. Most of these are seasonal, and I certainly trust the praise that I’ve read about it. Perhaps one evening, Marie and I will find ourselves back in the city where we met and give the full menu a try.

But what I wanted was a burger and this place did not disappoint. The “Cartburger” is made with beef from one of their operations, a co-op called Moonshine Meats. The burger is then dressed with green tomato marmalade, pimento cheese and greens. It was completely fantastic. There are certainly good burgers available in the city – White Tiger and Clocked! come to mind – but this is probably the best. I wished that Marie could have been with me. She was having a good time on the island with her mother, and not having a burger anywhere near this good.

Another great thing about driving in Athens on a weekday is that, sometimes, you can listen to my favorite radio station, WUOG. It’s my favorite because sometimes, it sounds like they’re just shuffling my own iPod. Over the last few years, I have tuned in to dead air and static – their hours are somewhat wonky in the mornings – but the “Odd Man Out” show was on and I heard Hope For Agoldensummer, St. Vincent and Sleater-Kinney, among several other acts that I didn’t recognize but really enjoyed. As I was leaving Athens, the girl in the booth, probably needing a restroom break, started playing this quite unbelievable bit of noise from an act called Tunabunny called “Outer Space is the Center of the Earth.” Nineteen-odd minutes of absolutely enthralling and engaging hollering and banging later, I was on the phone to that DJ asking what the heck that was, and to thank her for playing it. (You can still do that with college radio, and I still remember the phone number.)

It struck me, as I got into Danielsville, that the girl probably wasn’t born when I was first climbing those stairs of Memorial Hall to visit friends at the station in the late eighties. And here, all this time later, WUOG is still finding fantastic new music to make road trips amazing.