It’s up in the air, and we don’t know for sure, but if that’s where the job ends up being, that is what we will have to do. But it is going to mean that we want to make the most of our time in Georgia if it is indeed coming to an end this year. Two Fridays ago, Marie went to visit her mother and father and give them some grandchild time. I was not able to join her and the baby due to an early morning appointment that would cost her several important grandbaby hours waiting for me, and so she went one direction and I, once I was finished and the teenager was safely tucked away, went the other.

I drove east out I-20 to a forty year-old barbecue joint that I had not seen in a really long time. Holcomb’s Bar-B-Que opened in White Plains in 1971, and, ten years later, they opened their better-known second location in an old service station in Greensboro. I had actually never stopped at the Greensboro store before. All of my previous stops in the 1990s, driving between Athens and Savannah, had been at the White Plains building. That’s a fantastic old place that does the famous sawdust front porch of Gray’s Old Clinton and Jackson’s Fresh Air one further. It has a sawdust dining room.

The second store is not nearly so, shall we say, rustic, but it still has a very old-fashioned feel. And while there isn’t any sawdust at the Greensboro store, there’s a sauce that’s lovably and fabulously reminiscent of Old Clinton’s. 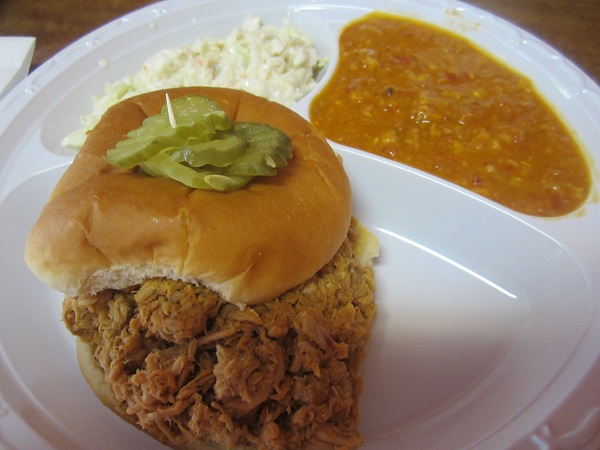 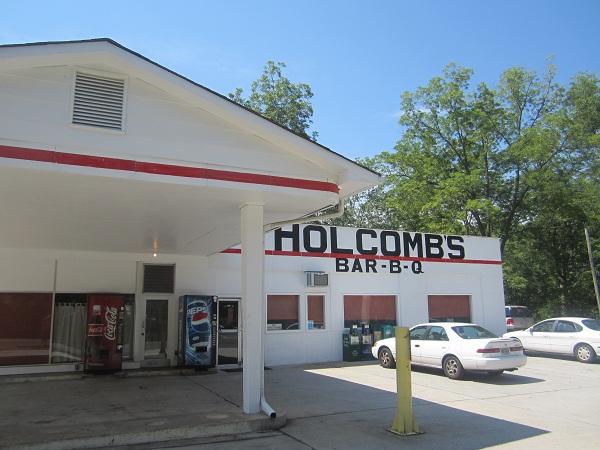 David Holcomb started this business in 1971. He’s no longer with us; his wife owns it today. She and her late husband were big friends of the state police, and loved making sure that traveling patrol cars on the highways of east Georgia had someplace to stop. They were made honorary members of the Georgia State Patrol.

This was the first of four places that I visited on this road trip where I enjoyed a chopped pork sandwich, stew and slaw. The meat, which is smoked at the White Plains store and brought twelve miles north to Greensboro, is shredded finely and has a fabulous zing to it. The sauce is a thin blend of vinegar, tomato and pepper and approximates the taste and feel of Old Clinton’s just perfectly. The stew would be the thinnest that I enjoyed over the weekend, but I couldn’t help but feel that I was tasting something a little creamy in the recipe. The sweet tea is really sweet, and almost black.

Towns in this area like Greensboro, Madison and Watkinsville were where I first stretched my legs as a young adult and went out of my comfort zone on little day trips, visiting antique stores and learning about barbecue and less frantic, small town life. It’s where Georgia went from “that state that surrounds Atlanta and Athens” to “my home.” The drive back to Athens, through the beautiful Oconee National Forest, past the Iron Horse, past Hot Thomas Barbecue, through Watkinsville and finally to the bypass, made me incredibly nostalgic.

Dayton is an awfully, awfully long way away from these back roads. We’ll have to see how things go, and you dear readers will have to see what we decide. But first, I had this burger that I’ve been waiting for-freaking-ever to finally eat. More on that next time.