Quite a few of us in this hobby have a love for old, vintage restaurants, and, as you saw in yesterday’s chapter, and will see again next week, the South Carolina Upstate is really packed with businesses from the 1940s and 1950s that are still vibrant and fun.

I’ve commented previously that the city of Macon is home to a pair of very old chains with multiple locations around its metro region, Fincher’s and Nu-Way. Greenville, similarly, has a pair of chains with spots all around town, but the Clock and Pete’s stores that Greenvillians know very well are quite different from the examples that I use for Macon because all of the surviving stores are independent. Because there is no corporate web site keeping track of them, and the restaurants tend to not use social media, and also because nobody in Greenville with a blog has done all the necessary research for us to lean on already (ahem), I’m not entirely certain of my figures here. It appears that there are five Clocks left from an original seven, and at least five of the eight or more Pete’s stores are still around. I know that there were once at least six Pete’s, because I took a picture of Pete’s No. 6 in Easley when I drove through in the summer of 2012. Other Pete’s stores can be found in Woodruff, Greer, and Seneca. The much loved store number four, which is better known as Como’s Pete’s, is in Greenville itself.

Since Como’s Pete’s – the fourth store, opened in 1954 and sold to Jimmy Como in 1956 – is the only one of any of the Pete’s to have an “about us” attempt at history on its website, I figured it sensible to rely on that along with a little background from our server. Jimmy Como was the nephew of George and Nick, who opened at least three of these stores. The original Pete’s was not related to any of the others and closed in 1970. Pete’s No. 2 is also gone. The third Pete’s is now referred to, quite erroneously, as “the original,” and the fourth Pete’s decided to distinguish itself from the others when Jimmy moved to a larger building in 1985 by renaming the business Como’s Pete’s. His sons Nick and Tony run the business today, and they’re at least honest that the name change didn’t confuse anybody any less.

Making matters worse for anybody curious about the history of all the Clocks and the Pete’s, there’s a business on Easley Bridge Road in Greenville called Jimmy & Pete’s Clock Restaurant. At least nobody named Fincher has ever opened a Nu-Way. 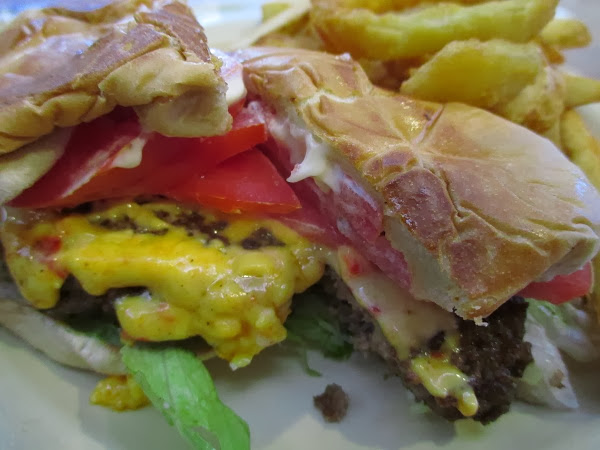 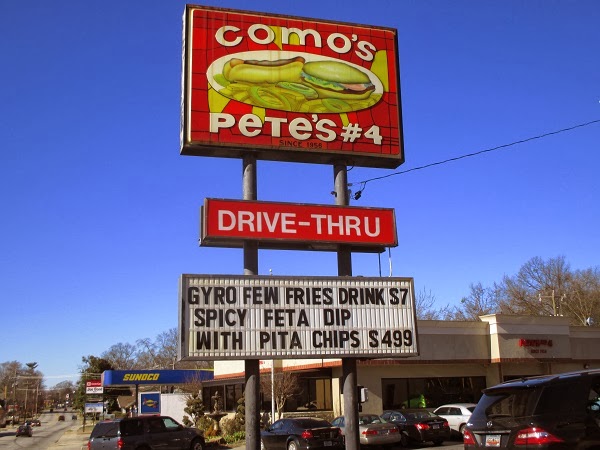 Basically, all of these Pete’s are old-fashioned small Southern diners, each with their own specialties and flair. A trip to any of the Pete’s, I believe, is not unlike a trip to the Landmark or the Marietta Diner in the Atlanta area. Perhaps the Clocks are a little more analogous to our Martin’s or Zesto. The apparent specialty at Como’s Pete’s is said to be the meatloaf, but I feel strongly that a trip to South Carolina should always include a pimento cheeseburger, so I had one of those. Marie passed on dining here, as she had something of her own to investigate at our next stop.

I don’t know that I’ve ever had to disassemble a hamburger in order to remove excess tomato before, but there’s a first for everything, I guess. I love tomatoes, but five slices were pretty overpowering! The burger’s not too bad, but the pimento cheese is very nice and they work together to make a really good sandwich. Add a glass of Pepsi and attentive service, and a single onion ring atop the order of fries and side of cole slaw, and that’s the recipe for a simple yet pleasant and memorable little meal.

Como’s Pete’s is open Monday through Friday for lunch and dinner, and Saturdays and Sundays for breakfast and lunch. They close at 3 pm, so roadfooders looking to sample them need to plan accordingly. My next stop, after a long Baby Mercy Break and Marie’s lunch, was at a barbecue place that closed ninety minutes before we arrived. Yes, the Upstate is full of curious and interesting old restaurants, but it’s also full of places that don’t stay open late enough to accommodate all of us food tourists!