For the second time in an afternoon, the road took us to one of the meals that John T. Edge spotlighted in his famous article, “100 Southern Foods You Absolutely, Positively Must Try Before You Die”. Edge, whom I have mentioned here previously as the Professor Emeritus of Eating Real Good at the University of Mississippi, really loves pimento cheeseburgers, and spent a mouth-watering chapter of his essential book Hamburgers & Fries waxing eloquently about them. So to have just this one burger at a lovely old place called the Kingsman singled out for that article, that sounded to me like a burger that needed a visit.

Cayce is a busy suburb of Columbia, a city that still demands much more attention and a lengthy and focused visit in the company of locals who know where all the good bookstores are, and the interstate took us into the town of West Columbia first. All I know about West Columbia is that it was once the home of United Music World Recording Studios Incorporated (“The finest sound available anywhere”). Cayce is on the southwest side of the metro area, and the Kingsman is in a corner spot in a striking, surprisingly large and sprawling strip mall. The restaurant has been here since the shopping center opened about forty years ago. Once upon a time, the strip was anchored by a Belk and several upscale shops, but it has been slowly deteriorating over time, and the main attraction is now one of South Carolina’s million or so Bi-Lo grocery stores.

The sprawl of the place is really interesting. I read Epicurious Eats‘ review of the Kingsman – I liked the burger a lot better than he did – and knew from his photo of the exterior what to look for. However, the shopping center wraps around very strangely, facing three streets with multiple corner points. For Atlantans with long memories, it’s similar to the recently demolished Belmont Hills in Smyrna, or Suburban Plaza in Decatur, where you could honestly visit for ages having no idea until somebody tells you that there’s a bookstore or a video arcade or bowling alley in the place. I’m not kidding, my heart was starting to sink and I feared that the restaurant had recently closed before we turned around the correct corner and found it. 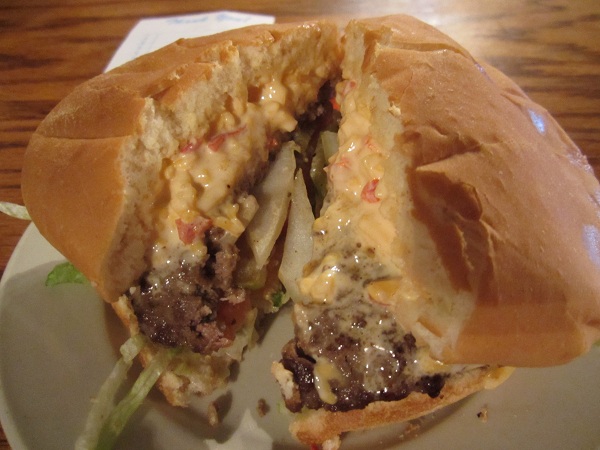 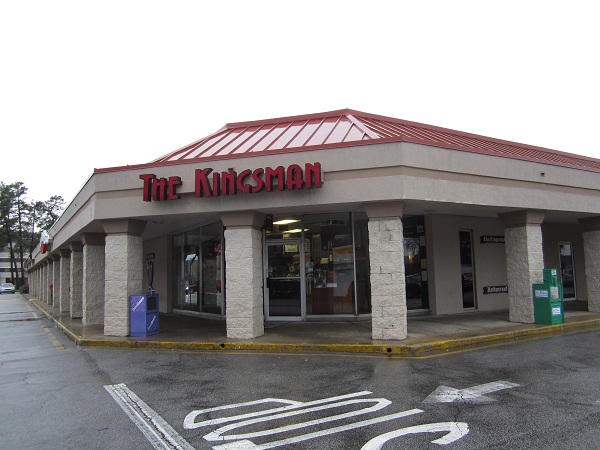 By this point, I had indulged and overindulged and Marie had drawn her own line in the sand to take a short break from eating. As much as I was looking forward to this burger, there wouldn’t be any fries or salads to go with it, just a pimento burger and a glass of water for myself, and a Pepsi for Marie to wake up a little. They serve a lot of Pepsi in South Carolina, I’ve noticed.

I hate this phrase, but the Kingsman is a really old school restaurant. They don’t make them like this anymore. It hits a very curious nostalgic chord for me, as it half-reminds me of very, very vague childhood memories of the sorts of nice bar and grill restaurants that thrived before anybody thought about offering kids’ meals. Most of the time, when my parents took me out to eat in the 1970s, it was either to fast food places, or to family restaurants in our area, like the Red Sirloin steakhouse on Cobb Parkway or the Akers Mill location of the Round the Corner chain. Once in a while, though, we’d go someplace smoky, that wasn’t necessarily upscale, but was more nicely designed. It looked grown-up. I halfway remember a bar and grill called Copperfield’s that my father would bring me on “Take Yer Kid to Work Day.” That’s what the Kingsman reminds me of, with its suits of armor and Tiffany lampshades and quiet music and those very seventies mirrors with a huge playing card printed on the glass.

The restaurant is still owned by the King family, and I’ve decided that they’re terrific people because of a delightful bone that they’ve thrown one of their employees. The Kings, like most in Columbia, are big Gamecock fans. That’s as it should be, of course. Columbia and Nashville are the only state capitals in the southeast to be home to an SEC school, but Nashville might as well just be Knoxville West for all the orange and white worn by the locals. There’s Gamecock burgundy in abundance inside this great old restaurant, but the family kindly ordered a staff T-shirt in orange for our server so that she could show off her Clemson Tiger pride. What great owners. I’ve been having a playful argument for ages and ages with our operations manager about neither Bulldog red nor Bulldog black being in the “palette” available to have a staff T-shirt made specially for me where I work. I’m not going to win this argument. I’m jealous.

Epicurious Eats definitely visited on an off day, because this burger was terrific. The meat was cooked just right and the cheese was really perfect, gooey and dripping and flavorful. The burger was hot and the cheese rapidly turned into a glorious, melted mess. I do think that I preferred the one I had five hours previously at Northgate Soda Shop in Greenville, but only by a hair. They were both excellent sandwiches. I’ve had several pimento cheeseburgers around Atlanta over the years, but neither were as good as these two in South Carolina. I don’t know why the locals call it the Palmetto State, when Pimento Cheese State makes so much more sense. Maybe it might not make for a window decal quite as simple and effective as that tree you see on the backs of so many peoples’ cars and trucks. That must be the reason.

Other blog posts about the Kingsman: