This is Marie, contributing an article about a place that my father and I went to together when he lived in Augusta. My dad liked Luigi’s because it had Greek chicken, was convenient, and had a plate on the floor in front of the door stating “On this date in 1870 nothing happened”. (It is possible I may have slightly misremembered the date.) My dad is the kind of person for whom a tickle to the funny bone is worth twelve great meals. And this place seems to have offered him more than twelve. Grant had originally scheduled a popular burrito place, Nacho Mama’s, to sample as we drove through Augusta, but, protesting that he’d reached his limit, asked whether I’d mind having the burrito and telling him how it was. If that was going to be the case, I would rather visit a restaurant that’s important to my memory.

Luigi’s is a family type restaurant on the bad side of downtown. The restaurant has been in place since 1949, and a lot of bad things have happened to downtowns since then; Augusta doesn’t seem to have escaped from even one. For goodness sakes, there’s even a pillar that is supposedly able to strike you dead. The pillar does seem somewhat forgiving to work crews that move or repair it, so I have to assume that the curse was displaced onto the downtown itself. There’s even a pool hall, a tattoo parlor and a strip club in the otherwise mostly empty row of shop fronts where Luigi’s lives. And it does live – the place was packed, and early, when we got there with only two booths left available, and a wait list swiftly built up while we waited for our food to arrive. Local legend has it that the actor Jackie Gleason, in town for the Masters in the 1970s, followed up his meal at Luigi’s with an all-night hustling in the pool hall next door. 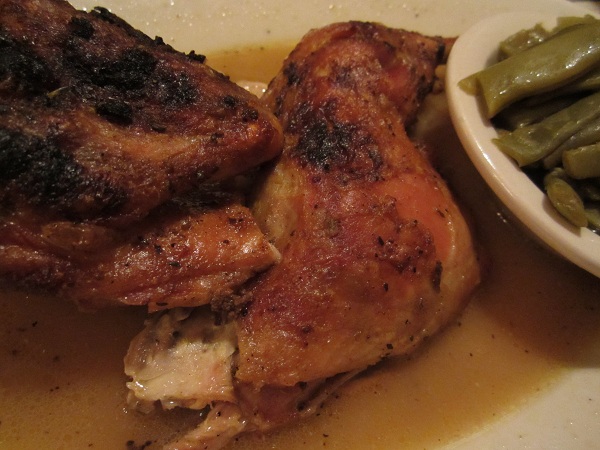 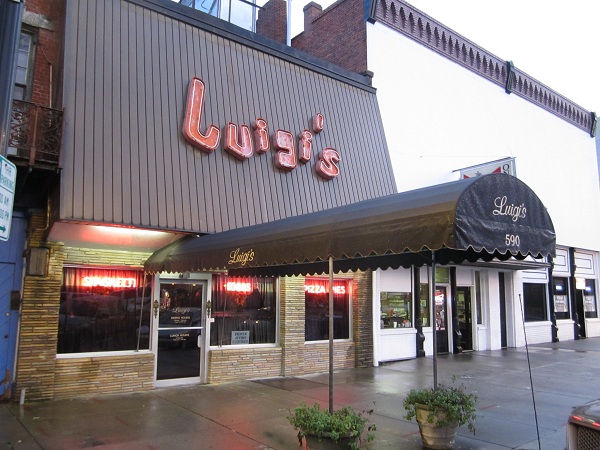 The original owner’s son currently runs the place. Curiously, neither of them was actually named Luigi. He’d been in an entirely different field of work and moved back to town to take care of his Dad, and wound up taking over the business. The decor is very strongly influenced by golf and ’50s music. The booth where we sat had in a large frame an almost uninterrupted run of Masters badges going back to the early ’60s, including one labeled as being a counterfeit. The kitsch is amusing and the juke box by the door works.

Reviews of the food vary from highly positive to lukewarm; there seems to be some variability in the quality. The menu has a curious combination of American Italian and Greek recipes, and my dad’s choice was generally the Greek chicken. That is a half chicken, roasted for at least 2 hours, and served with salad, rolls, a side, and lots of gravy. The meat is tender and flavorful without being overspiced. Of course there was no reason for me to buy anything except that for this visit.

This chicken was one of the few things he mentioned missing when he moved away from Augusta. One time when I was still living in Athens, I decided on a whim to drop by Luigi’s “on my way” to St. Simons Island and bring my Dad some Greek chicken. It only added a couple of hours to the trip, but it connected me with my grandfather, who was known to drive five hours or more out of his way (he would regularly drive between Minnesota and Mexico) to have a cup of coffee in my mother’s kitchen for twenty minutes. On the whole, I don’t know that anyone else would need to go that far out of the way for this place, but it made me happy to visit.