If you follow anybody in this hobby of writing about food and restaurants, you might have sussed that Hottie Hawg’s has been on a publicity blitz lately. The restaurant appeared last month on Lifetime TV’s Catering Wars miniseries and as the owner, Kyle Vaughn, was thinking about where they stood among other barbecue restaurants in our city, he noted, correctly, that most of the region’s bloggers have never really written about them. So his team went to work, sending out invitations to several of us. If you have not read about Hottie Hawg’s in the last two months, it’s not for lack of trying. They have had quite a few of us hobbyists in for a meal.

So, one Saturday last month, Marie had to work and so the kids and I drove in to take Hottie Hawg’s up on their invitation. Mine noted that I had written about them previously but was overdue for a return. I appreciate the personal touch. The trip took us to Bolton Road by way of I-285 and South Cobb Drive. They are located in Fulton County, barely, and if you come the way we did, you’ll pass by a decommissioned incinerator on the side of the Chattahoochee which is just the most astonishing thing ever. I would love to come back and photograph the building, which is being reclaimed by the elements and completely beautiful in a “nature always wins” way, sometime when I don’t have a toddler in the car and I’m not wearing flip-flops.

The toddler, incidentally, was on his very best behavior during this meal, which we enjoyed with our friends from Spatialdrift, who had arrived shortly before us. We got seated, placed our orders, and then began the long struggle to take any pictures worth sharing. I’m afraid that the low light and red interior did a complete number on our ability to shoot anything that looked very good. I assure our readers that the food tasted much better than it looks here, but I do wish that the restaurant would install some much better lighting inside. I mean, they have quite a nice collection of Dallas Cowboys memorabilia on the walls and on a rafter shelf above the tables, and they’d like to show that off, right?

I take some solace as I look over the photography of our friends and peers in the links below and see that none of us did a very good job taking pictures, did we? I wonder whether Hottie Hawg’s invited Savory Exposure for a meal. Now that man knows how to take pictures in the dark. 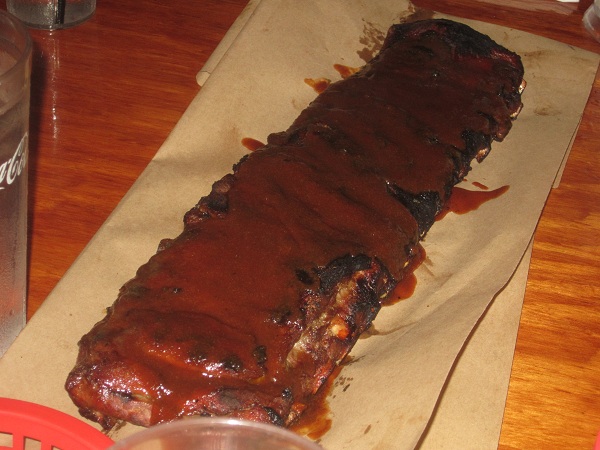 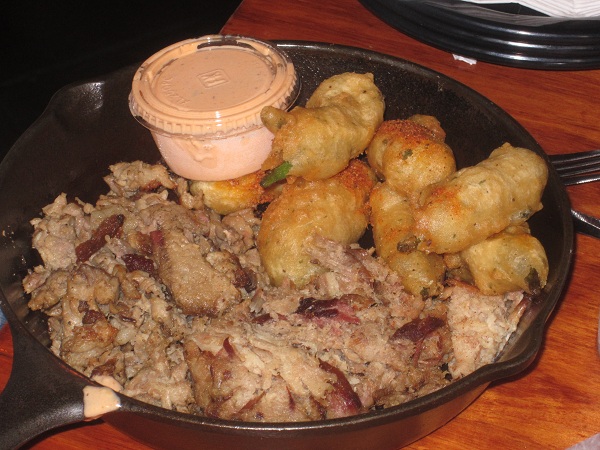 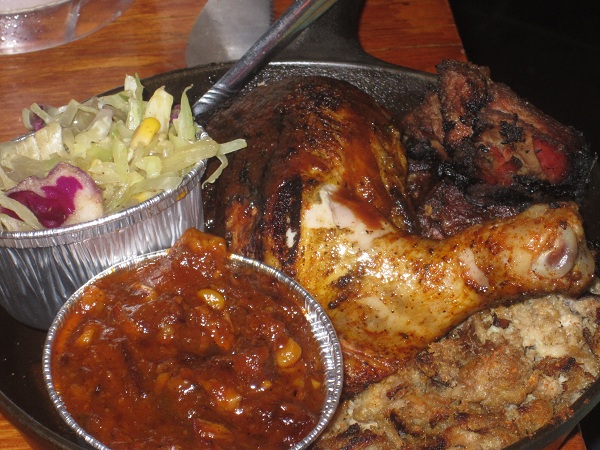 Unfortunately, neither the owner, Kyle Vaughn, nor the gentleman who invited us were there when we arrived, and we weren’t offered the Sampler Platter that other writers have shared with their audience, but were given our pick of the menu instead. We were slightly confounded by the restrictions of the menu, and only able to order certain things to share outside of the combos. For example, you can’t get ribs as one of the meats in a combo, so I asked for a full rack for the table to share, and my daughter and I had a three-meat combo with pulled pork, beer-can chicken, and burnt ends. The ribs were very good and tender, much better than several of the restaurant’s rivals in the area, though I would have preferred that they come out dry as I had asked for them. I also really enjoyed the pulled pork, which is smoked over hickory coals overnight, especially when given a bath of a perfect Piedmont mustard sauce. They also have a more typical Georgia tomato-vinegar blend, which went well with the burnt ends, but the pork with this mustard sauce is a really great combination.

While this isn’t a meat market-style Texas joint in the way that Moonie’s in Flowery Branch or Chuck Wagon in Huntsville are, this does share with them the Texas tradition of offering lots of different meats. Emily and Adam, apart from sharing the ribs, got some brisket, smoked chicken, and more pork for the table. I think that between us all, I think that we had a little of each of their meats apart from the sausage, which was sadly unavailable that day thanks to a supplier hiccup.

My children were a little less satisfied with two of the meats. The toddler rebelled completely against the burnt ends, eyed me suspiciously for the rest of the lunch, and otherwise contented himself with his mac and cheese and occasional angry looks. The girlchild did not care for the beer-can chicken, giving no reason. I think that she was simply nuts; the chicken was juicy and full of flavor. She really enjoyed the stew – as with Buckhead Barbecue Company and Fox Brothers, they’ll also do that dorm-room Frankenstein concoction of giving you a half-and-half bowl of stew and mac and cheese – and finally consented to try ribs for the first time in her life when Adam showed her how to cut a couple of bones off the rack. She seemed to like them even more than I did, and, biting her lip, kicked herself afterward for all the ribs that she’d refused to try before.

I can’t claim to be completely surprised that it took a family friend, and not her dear old dad, to get her to try something new. She’s done this, and variants of this, for years. Last month, she started singing “I’ll Be Your Mirror” after swearing blind that all her old man’s music was horrible because some emo girl she knows introduced her to Lou Reed. “Wait, wait, wait, Dad… you know the Velvet Underground?” That’s right, kid. I even know that Paul McCartney was in a different band before he was in Wings. 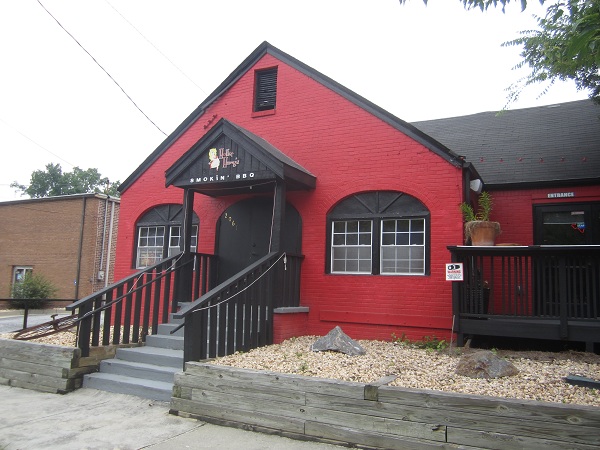 I suppose that Vaughn, who goes by the name Boss Hawg, was out being evil somewhere when we visited. On the Catering Wars TV show, he quickly took the villain role, awesomely over-the-top in his immaculate white suit and hat, undercutting his opponents and stealing clients, accompanied by both muscular henchmen and femmes fatale in the form of his cooks and his scantily-clad servers. The curvy bombshells in their Daisy Dukes have been present since the restaurant opened in 2010, and while I’m sure the members of Cowboy Nation who fill this place on Sundays in the fall have been enjoying their attention all this time, I believe that the Boss Hawg persona is relatively new.

We stepped outside to snap some pictures and marvel at the damage to the neighboring property by a downed tree. We’re all in agreement that this restaurant is a good one – Bella Vivere, incidentally, is hawg wild about the place – and deserves a little more attention and notoreity from the area’s barbecue writers, but we’re also in agreement that the “sexy pig” mascot is downright creepy. All pig logo mascots are at least a little weird – think about the Dish of the Day from the Restaurant at the End of the Universe – but I just don’t know about her.

Other blog posts about Hottie Hawg’s from their recent publicity blitz: