Shakey’s Pizza was not part of my childhood, but it was a part of a whole mess of other people’s. Every so often, it sparks a happy memory or ten among some of the regulars at forums where I visit. If you’re in California, you’re never too far from a Shakey’s, as there are still about fifty stores in that state, but only ten others in the country. In the southeast, there is one in Auburn, and one in Warner Robins. Every week, a delivery truck comes east, bringing food for both of these stores. Perhaps they still have local-market TV ads for Shakey’s in California. Here’s one from the early 1970s, starring Kathy Coleman, who’d later play Holly in Sid and Marty Krofft’s Land of the Lost. The ad shows what Shakey’s used to be: a bizarre mix of Tudor design and Dixieland jazz with styrofoam boaters.

Today, the Dixieland has been retired, and, across most of the chain, the “ye olde” trappings have joined it. The original co-owner of the chain, Sherwood “Shakey” Johnson, played ragtime piano and so that was the original schtick back in 1954 when the first location opened in Sacramento. This led to the installation of player pianos in most of the stores, which many grown-ups today remember, possibly mixing up their childhood memories with the equally loud silliness of Farrell’s Ice Cream. Happily, however, the “ye olde” Tudor design can still be seen at the Warner Robins store, which we visited on our way back from Saint Simons Island. This location opened in 1970, and one of the servers told us that Jim Kiefer bought it in 1972 and has been running it ever since, hosting kids’ birthday parties and quiet getaways for airmen from the nearby base in equal number for more than forty years.

We hope that the Shakey’s corporation never decides to update this store. We like it just as it is, frozen in time for forty years. 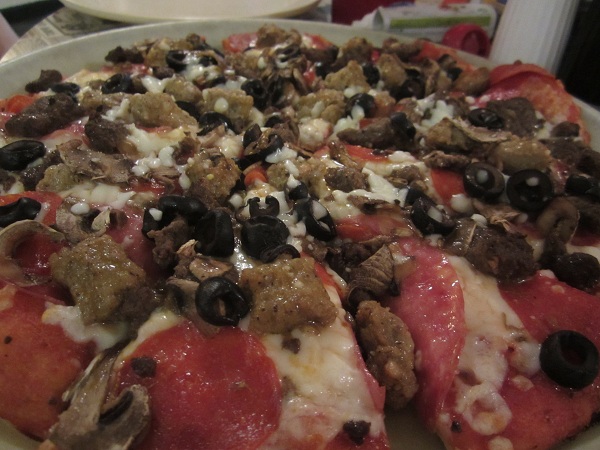 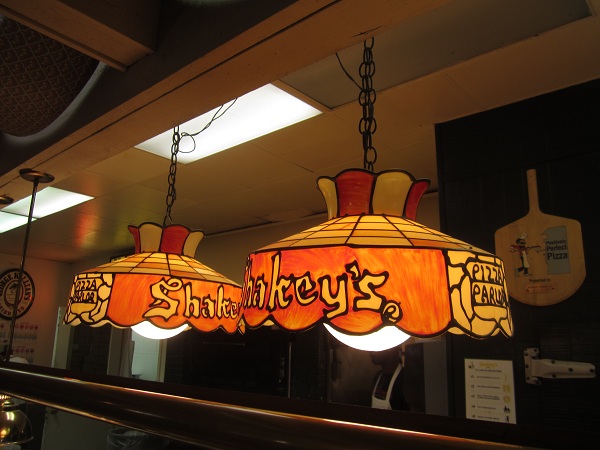 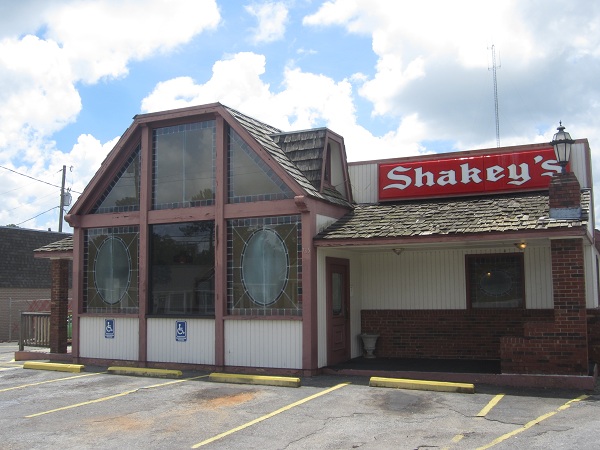 When I was a kid, I thought Pizza Hut was the greatest place in the world. You know of course that the taste and flavor of Pizza Hut changed – for the worse – over the years as they refocused their strategy away from pizza parlors and to a delivery model. Shakey’s Pizza tastes almost exactly like how I remember Pizza Hut from my childhood. Our friend Rex had hoped to join us but was unable to make it. At his suggestion, we ordered a Shakey’s Special. This is a very cool combination of four meats – salami, pepperoni, ground beef and Italian sausage – with mushrooms and black olives. It tasted like somebody opened one of those pylons from the Land of the Lost and teleported that pizza from 1972 straight into the present day. Marie and I agreed, much to our daughter’s bafflement, that this was what pizzas tasted like when we were kids.

Just imagine. Forty years from now, delivery pizza is going to be so terrible that somebody in 2053 is going to blog about some restaurant that tastes exactly like Papa John’s does today. I weep for the future.

We didn’t think to add any Mojo potatoes with our pie. These are thinly-sliced potatoes, battered and lightly fried, which have a huge following on their own. If the road ever takes me back to Warner Robins, I might have to swing by for a snack of these! What we did get were some surprise cinnamon rolls. We arrived just as they were preparing to close down the lunch buffet, and, rather than throwing out the last of the desserts, our server gave us each one of these big treats with sticky, wonderful sauce.

But speaking of roads taking you to middle Georgia, this is a detour that everybody needs to make at least once. Between Atlanta and Florida, you’ve got your choice of quite a few interesting barbecue stops, but for the sheer, bizarre, time-travel trip back to the 1970s that this place is, it is absolutely worth putting this near the top of the list if you have any interest in restaurant history. Just two chapters ago, we talked about a barbecue drive-in from the 1940s that corrupted its timeline by adding 1980s posters and prints of 1950s celebrities. Shakey’s didn’t do that. It didn’t refresh and remodel and then decide that it needed some prints of John Travolta and Kristy MacNicol on the walls to evoke the seventies. It simply is the seventies, in look and taste. It’s a must-see.

We thanked the staff – Jim Kiefer had the afternoon off, which was a shame – and then took a little detour south. We dropped Marie at Lane Southern Orchards to pick up a box of peaches, and I drove the children into the town of Fort Valley. Until very recently, there was still a Shrimp Boats open in this community, about which more next month. It apparently closed last year, but Fort Valley does still have a Nu-Way so that I could get a slaw dog and a Coke with flaky ice. 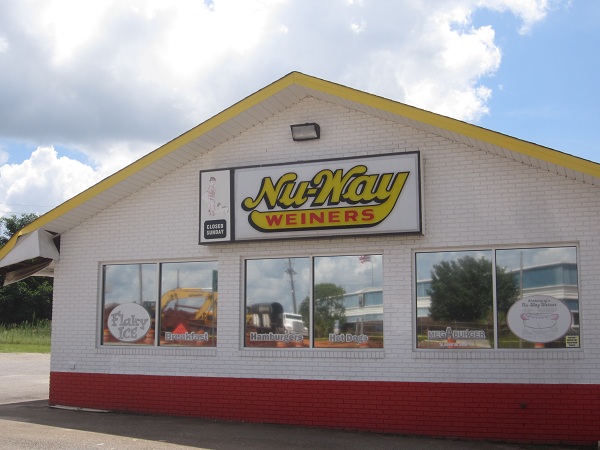 This Nu-Way store – there are nine in middle Georgia – opened in 1972 and no, your eyes are not deceiving you, the building really is that ugly and it’s not entirely the fault of your inept photographer that the picture is so darn bad. But no mind, the food is just as good here as at the chain’s other stores, the wonderful red “weiners” smothered in white and green slaw and a line of mustard. Marie said that she had more than enough pizza and was happy to pick out a box of peaches while we made the detour. I still say that she missed out. It had been a while, and I’d go a long way for a Nu-Way.