Among long-term Maconites, it’s an open secret that whatever your opinion of Georgia’s two best-known hot dog empires, the big one up in Atlanta borrowed a thing or two from the original down here in middle Georgia. Nu-Way is one of the oldest existing restaurants in the state, having opened its first store on Cotton Avenue in 1916 under the aegis of James Mollis. The small chain, presently at eleven stores around Macon and Warner Robins, is still very famous for its grilled wieners and, of all things, Coke served over a flaky ice that’s pretty familiar to Atlantans. Since Nu-Way is having some considerable success with its expansion throughout three counties, it has more in common with a regional chain like Pal’s Sudden Service in northeastern Tennessee than with a single-location downtown hot dog stand, even though that’s kind of how Marie and I view it.

The story has it that the original Nu-Way had been thriving for a dozen years before a fellow named Gordy passed through town in 1928, liked the look of the dogs and the ice and the mild, meaty taste of the chili, and basically built a copy of the store in Atlanta on Luckie Street, naming it The Yellow Jacket. Over time and expansion to the closest college campus up in Athens, the Yellow Jacket became the world-famous Varsity, which we all love, despite the crawling damage it’s done to our arteries. If you want a taste, however, of what this experience might have been like had Gordy and his family elected to stay small, you’ll need to swing through Bibb County and “go a long way for a Nu-Way.”

I’ve been meaning to see what one of the satellite drive-through stores looks like, but each time we’ve stopped in Macon going to or from the coast to have a Nu-Way, we’ve gone to the original downtown location. Like some of the famous hot dog stands in Birmingham, this is a very small, cramped space absolutely packed with diners. There is a strangely small and short counter, one that I don’t advise anybody wearing a nice, long overcoat try unless they are ready to have it drag along the floor, and a half-dozen remarkably tiny booths for a party of four to get really friendly in. Somehow, Oprah Winfrey was able to get a camera crew in here in 2007 for one of those “favorite things” episodes that she does. A rather garish, framed photomontage of the celebrity’s visit adorns one of the walls.

We stopped by Nu-Way a couple of days after Christmas, with middle Georgia still enjoying temperatures in the high fifties. Parking on Cotton Avenue within sight of the store is limited, but most people on that road seem to just be parking there for a quick twenty-minute meal, so the turnover on spaces is always pretty good. My son and I each tried chili and slaw dogs and enjoyed them, while my daughter, who likes neither slaw nor usually, on hot dogs anyway, chili, had hers plain.

Since Marie is pregnant, she is avoiding nitrates and has sadly cut hot dogs out of her diet until the early summer, so she just had a burger, which she enjoyed. Nu-Way offers something they call a mega-burger, advertising it as “a meal in itself,” but it lacks the simple, charming novelty of a good hot dog, Many women celebrate having a baby with their first pint of beer for several months; Marie’s going to want a salami sandwich and a chili dog.

I notice that our little tab for the town of Macon is still quite barren for a town of this size which we pass through several times a year. The only other restaurant that I know I have visited here is Jennoely’s, a pizza place just down the road from Nu-Way, which is certainly worth another stop sometime. I know there are some places in nearby Jackson and Griffin that we intend to try on our trips back and from Georgia’s coast, but we should definitely make more stops in Macon to see what hidden treats there are in this place. I wonder what might be awaiting us when we swing back through in March…?

Just as an update… in August 2011, we stopped by one of the other nine or ten locations in the area. This one’s on Emery Highway. We came by at the crack of dawn, since Nu-Way serves breakfast, but since you can get chili dogs anytime here, who would want a sausage biscuit when you could have two of these babies? (Also, the sausage or ham biscuits here are really small. And the location has no public restrooms, for some insane reason.) 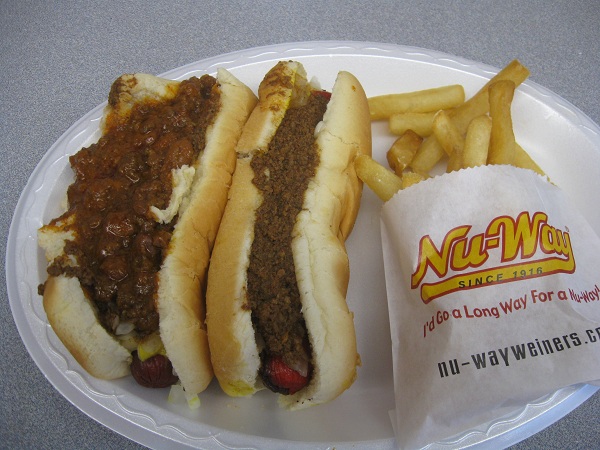 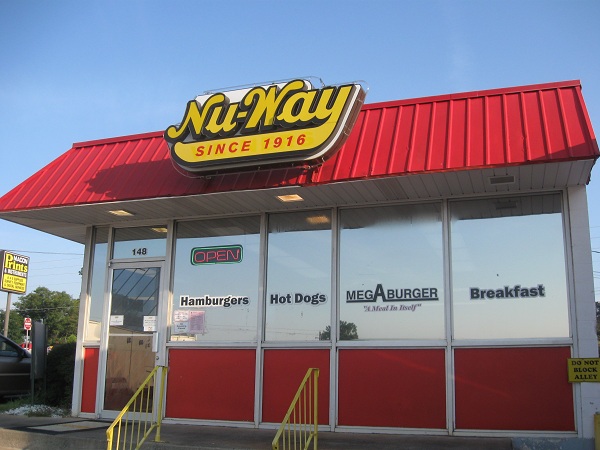 Other blog posts about Nu-Way: