The good people at Not Fooling Anybody might get a kick out of a little intersection in Marietta between the Big Chicken and I-75, where, once upon a time, three different national fast food chains once stood. These days, all three buildings house local ventures.

The most obviously visible – you can see it below you from the interstate going south towards Atlanta – is a former Long John Silver’s that now looks like somebody attacked it with an eight-pack of Crayola markers and trades as Supreme Fish and Chicken. Opposite this place on either side of Chert Road is a former Hardee’s that’s now called Presto Latin, and, facing that, a former Arthur Treacher’s. The building was constructed in the early 1970s and probably wasn’t a Treacher’s for all that long before the chain retreated northward. Wikipedia suggests that, as of 2008, Treacher’s only existed in eight states, but the corporate website is such a chore to navigate that it isn’t worth my time to see whether even that’s true anymore. Southern Subs opened in the space in, I believe, 1977 and it lasted here until perhaps 2001, at which point Chicago Delights moved in a truckload of sports memorabilia and quietly began serving some very good hot dogs.

I’m not kidding about the sports memorabilia. I mean, there are any number of Chicago-themed pizza and hot dogs places around town with a Blackhawks banner and a Bulls jersey on the walls, but I’m talking about photos of the ’85 Bears and freaking autographed Gale Sayers footballs, along with antique tins and bags of Jay’s potato chips. This is an impressive collection of treasures.

Oh, yeah, and the hot dogs are wonderful. They have a great special where you can get a dog and a Polish, a bag of Zapp’s chips and a drink for seven bucks and change. Sold! I had mustard and tomatoes on my dog with some Giardiniera relish, and had the Polish Chicago-style, with all the fixings, and both were excellent. 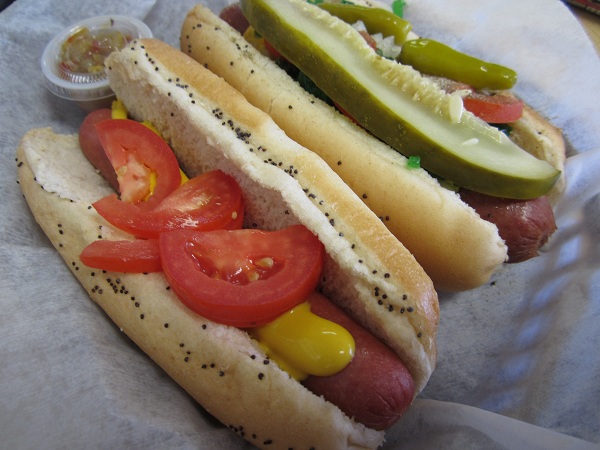 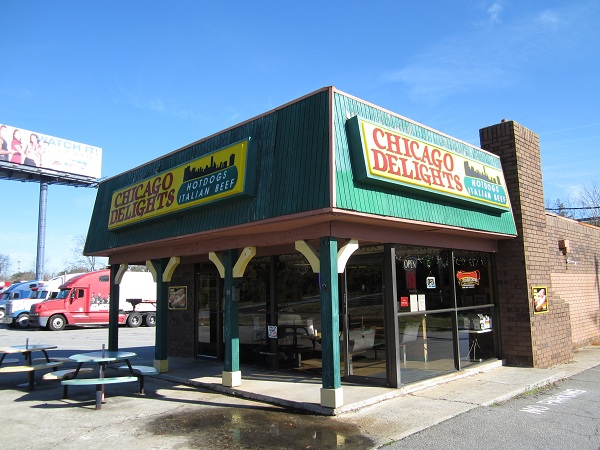 I ate here once before, in 2004, when I went through a little fad of trying many of the Chicago-themed hot dog joints around Cobb County. About half of those seem to be gone today, although I really don’t know that I was paying very much attention. Like Hot Dog Heaven in Woodstock, almost all of their food comes from the Vienna Beef Company, with the signature buns, baked by Rosen’s and repackaged by Vienna Beef, making a strong case for being the best-tasting hot dog buns of any in the world. Sure, the bread is one or two days old before it makes it here, but, steamed, the buns are just terrific. I didn’t want to leave a crumb.

But having said that, this is really all the same sort of food available at many places in the city. What makes it great at Chicago Delights are the prices, the fun staff and the real effort put into making this place feel like a genuine celebration of the Windy City. The homesick are guaranteed a good time here.

I decided to have lunch here because, a week previously, I enjoyed a meal a little ways up the road without my camera. I learned the hard way that my cell phone simply does not work as a substitute and so I needed to stop back by and redo a shot of the outside, and wanted to get a lunch in the same neighborhood. Honestly, I don’t know why I bothered. It’s not like you get art, or even something mildly intriguing, from a photograph of a space in a suburban strip mall. I guess my desire to provide an illustration for you good readers overrides common sense. 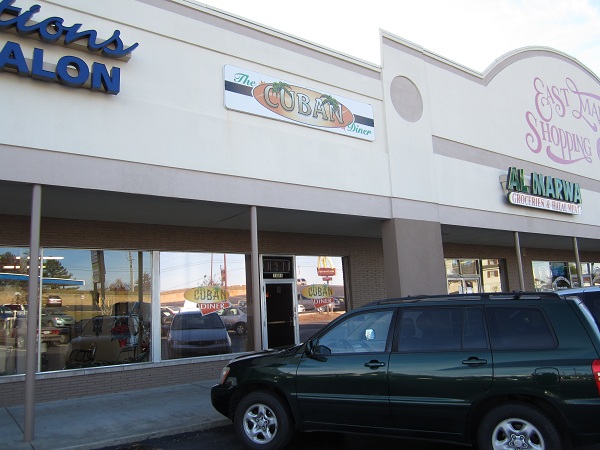 The Cuban Diner is located in the East Marietta Shopping Center, which, if you’re traveling east away from the Big Chicken, is that strip mall located down a whacking great hole on the right. I’d say that the only way to avoid scraping the underside of your car, which is a dead cert if you’re trying to climb back onto Roswell Road, is to go out the back entrance, onto Powers Ferry, but even there, you’ll have to contend with speed bumps like small mountains. You can’t win.

Anyway, the week previously, Matt and Kelley made the trek from their home in Gainesville up to Chattanooga to do some shopping at McKay Books. This is a trek that all of our Atlanta readers who enjoy bookstores should definitely make, and if you have not been reading about our trips to Tennessee to do this, then click that label on the right-hand side of your screen for Chattanooga and read about my frequent expeditions up here, pronto. So they needed to get some lunch along the way, and we went by Cuban Diner, which Matt had suggested. I read Atlanta Restaurant Blog‘s short-but-sweet review of the place and decided to try their lunch special of a half Cuban sandwich with two sides. I must have been in a yucca mood, because I had the “Cuban fries,” thick beasts made from yucca, along with the yucca con mojo, where the potato-like root is boiled and served with sliced onions in a thin mojo sauce. This little dish was terrific, but I wasn’t keen on the fries.

The sandwich was much as one would suspect: ham, pork, swiss cheese and pickles with, mustard and mayonnaise on pressed Cuban bread. It was nothing wild, but it was satisfying, and the service was impeccable. They messed up Kelley’s order, and were not about to let her leave unhappy, correcting the problem with smiles and the speed of light. A staff that cares to do the right thing and correct their errors is just about the greatest thing in restaurants, and guaranteed my goodwill.

4 thoughts on “Chicago Delights and The Cuban Diner, Marietta GA”