For the first time since starting the blog, Marie and I were waylaid one weekend by a plague. It was not the fault of any restaurant; rather, the toddler brought it home from daycare. So it was that, after a pretty good Friday lunch at Pho Dai Loi, and, after Marie’s brother Karl arrived for a weekend stay, a downright excellent supper at Moxie Burger, we spent Saturday in bed being awful hosts, asking the girlchild to step up and watch the baby, and left Karl to the TV and books. I was too miserable to even try to watch the Dawgs get five yards from beating Bama. END_OF_DOCUMENT_TOKEN_TO_BE_REPLACED

Long story short version: I was looking for a place new to me to visit a couple of Fridays ago, and the earlier that it opened for lunch, the better, since there were many things to do that afternoon. So I found a very popular hot dog place in Avondale Estates, a little town just east of Decatur that I had never, in all the years I’ve lived around this area, had reason to visit before. Skips opens at the agreeable hour of 10, serving up nicely-priced Vienna Beef dogs from underneath the requisite collection of Bears, Blackhawks and baseball memorabilia and banners. If their collection is not quite as wild and esoteric as the museum on the walls of Marietta’s Chicago Delights, it’s still enough to satisfy the homesick. END_OF_DOCUMENT_TOKEN_TO_BE_REPLACED

In the previous chapter, I reported that my mercurial teenage daughter had, abruptly, turned on hot dogs with a vengeance. It’s best not to challenge teenagers when they’re in the middle of one of their seismic changes of mood; it’s best to ride it out and whack ’em with reality a few days later. END_OF_DOCUMENT_TOKEN_TO_BE_REPLACED

A couple of Saturdays ago, my daughter’s mercurial teenage weirdness reared its ugly head. In the afternoon, we had gone to Chamblee for pizza, since she enjoys pizza so much, only to have her order a salad instead. In the evening, I asked Marie what she’d like for dinner. Marie suggested hot dogs, or possibly Mexican. I leaned toward the former; on Thursday, I had gone out for lunch at Taxco, the venerable Tex-Mex palace on Roswell Road, right where the Atlanta and Sandy Springs city limits crash together, and didn’t enjoy it very much. END_OF_DOCUMENT_TOKEN_TO_BE_REPLACED

The good people at Not Fooling Anybody might get a kick out of a little intersection in Marietta between the Big Chicken and I-75, where, once upon a time, three different national fast food chains once stood. These days, all three buildings house local ventures. END_OF_DOCUMENT_TOKEN_TO_BE_REPLACED

A few Fridays ago, my plans got stymied and so I decided to try out a new suburban barbecue joint that’s getting a lot of press and hype. It’s called Grand Champion and, while elements of it were admittedly pretty impressive, it was an expensive lesson in not necessarily letting the hype of the day overwhelm common sense. Let’s get one objection to this place out of the way first thing. Somebody at the post office has assigned this place the 30075 ZIP code and has been making the pretty bold claim that it’s in Roswell. It is not. I’ve lived here for many, many years, friends. This is Marietta. Cobb County. The Pope High School district, to be precise. In a pig’s eye this is Roswell.

Grand Champion is the latest place to claim lineage from the old Sam & Dave’s BBQ of Marietta. Co-owner Robert Owens worked there for a spell, before Sam and Dave split up. By my count, there are now five restaurants in the region that are run by members of this team. In fact, Owens apparently bakes his mac and cheese per David Roberts’ recipe. I actually tried Roberts’ mac and cheese at Community Q just a few days before and didn’t like it very much, so I passed on it here. Speaking of Community Q, I think that might be my ceiling. They charge eleven bucks, even, for a pork plate there. Any higher than that, and I’m going to start asking why. It costs $11.50 at Grand Champion, before tax. They’re located next door to a Dollar Tree, so please don’t tell me they’ve got steep ground rent to cover.

I went with a pulled pork plate with collard greens and Brunswick stew. Sadly, it appears that Owens picked up the most obnoxious lesson from Huff and company, and considers Brunswick stew a “premium” side and charges more for it. This atop the already steep price. Can we cut this nonsense out right now, Atlanta? There are five hundred barbecue joints in this state and somehow, the only ones who think that stew – stew! – is a premium anything are in the northern Atlanta ‘burbs.

Having said that, some of the food is pretty good. I’ve frequently bit off more than I can really chew with collards, and lose interest quickly, but these were better than most. The stew was indeed very notable, and rich with flavor. The sauces, in squeeze bottles on the table, were also good. The North Carolina vinegar was nice, but I really liked the dark brown Kansas City sauce a lot.

Unfortunately, the pulled pork wasn’t very smoky and it was also quite greasy, so I’d have to dock quite a few points for that. I don’t know what on earth they did to make it so greasy as to remove or overwhelm any taste of smoke from this pork, but it had the consistency and character of crock pot roast beef. It was limp and forgettable, until the Kansas City sauce brought it to life. I hate to sound like a Woody Allen character, but the food wasn’t very good, and the portions were so small! 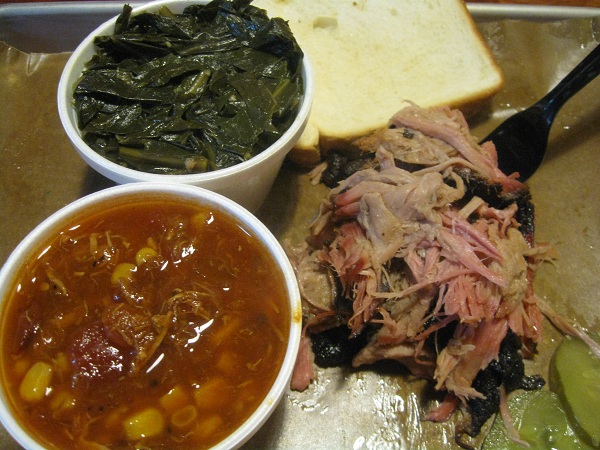 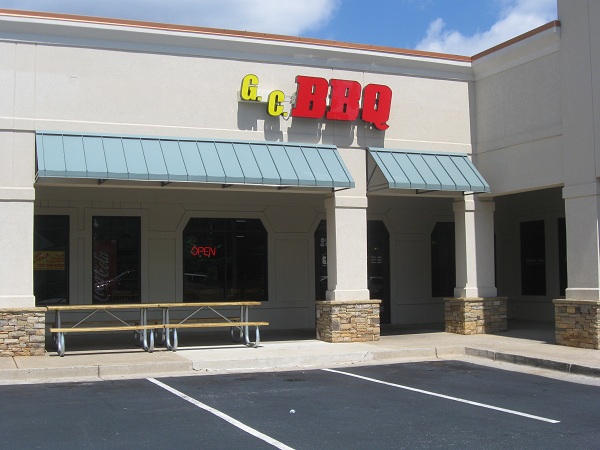 That is the least amount of food that I have ever paid for as a “plate” in a barbecue restaurant, and very nearly the most money that I have spent. Say what you might about inconsistency in the kitchen, an off-day, or different palates and different tastes, but honestly, there’s an understood rule about judging barbecue places that, while rarely spoken, trumps all other considerations. Simply put, if I’m going to pay $12.46 for a plate of barbecue with two sides, I better not be leaving hungry. I left hungry.

Fortunately, I had business in north Cobb about an hour later, so it wasn’t much of a detour to pop into Cherokee County and swing by Hot Dog Heaven in downtown Woodstock and get something to eat. 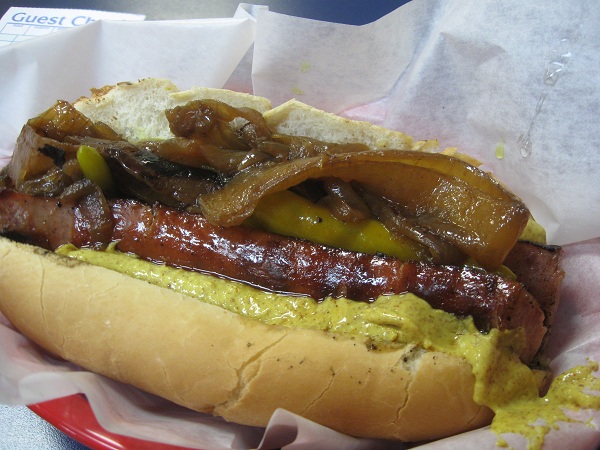 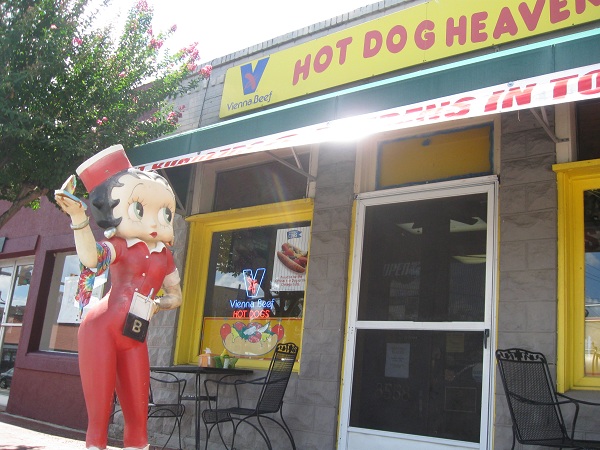 I have read much about Hot Dog Heaven over the years, and I’m very sorry that I visited on a day when Miss Becky was not working. There are many great stories about this superhuman example of effervescent Southern hospitality dishing out Chicago-styled Vienna Beef brand dogs at low prices, and I regret that I didn’t get to recount one to you dear readers.

What I can tell you is that here, you get a great big treat for not a lot of money. I did just have lunch, and didn’t want to overindulge or load down on calories, so I just parked out front by the Betty Boop and had only a “Maxwell Street”-styled Polish sausage with grilled onions, sport peppers, and brown mustard, and chewed that delicious thing down while the Travel Channel had one of their peculiar programs about food that only very weird foreigners eat. I don’t know who the market for octopus or beef tongue ice cream is, but I guarantee you that the hot dog that I was enjoying was superior.

Woodstock might just be a little bit of a drive for a Vienna Beef dog, Chicago-style, but the wonderful, laid-back and silly atmosphere is a great little place to kick back and get away from things. I’d like to stop by again the next time I’m in the area, and try a few of the other things on their menu.