A couple of Saturdays ago, my daughter’s mercurial teenage weirdness reared its ugly head. In the afternoon, we had gone to Chamblee for pizza, since she enjoys pizza so much, only to have her order a salad instead. In the evening, I asked Marie what she’d like for dinner. Marie suggested hot dogs, or possibly Mexican. I leaned toward the former; on Thursday, I had gone out for lunch at Taxco, the venerable Tex-Mex palace on Roswell Road, right where the Atlanta and Sandy Springs city limits crash together, and didn’t enjoy it very much.

This was, in part, because because I no sooner sat down than I realized I wasn’t much in the mood for a #7 lunch special or some nachos after all. Actually, I took an unwelcome phone call in the parking lot that put me in a dark mood, and that, unfairly, colored my experience. Taxco did nothing wrong, but it wasn’t possible to do anything right at that moment, either. I read some Robert B. Parker, cheered up a little, and completely forgot whatever it was that I had eaten. It’s a popular place; it deserves better.

Anyway, I asked the mercurial teenager whether she preferred hot dogs or Mexican for supper and she bellowed something like “Oh, God! No! Not hot dogs! Never, ever! I can’t eat those!” This was a very peculiar reaction. Eight days previously, we enjoyed a Daddy-Daughter Skip Day which included a trip to one of our favorite restaurants, Brandi’s World Famous, and this child ate her weight in chili dogs, loving every crumb of Brandi’s incredibly spicy chili, lips puckered in in a wide smile, eyes as big as saucers. I suppose that the “spicy” gene really doesn’t kick in until the teen years, but whatever the case, this kid has loved hot dogs since birth, and her sudden, abrupt turn on them surprised me. I was sort of counting on her picking hot dogs, as I wasn’t in the mood for Mexican again after that trip to Taxco. I only seem to want that sort of food every three months or so, you know.

Well, I’m still learning how to deal with my daughter being a teenager, which, basically, seems to mean waiting for the mood swing and praying, and not fighting it. She didn’t want hot dogs and I didn’t want Mexican, and that’s just fine. If we drove over to the Cobb Place strip mall, we could each be satisfied. 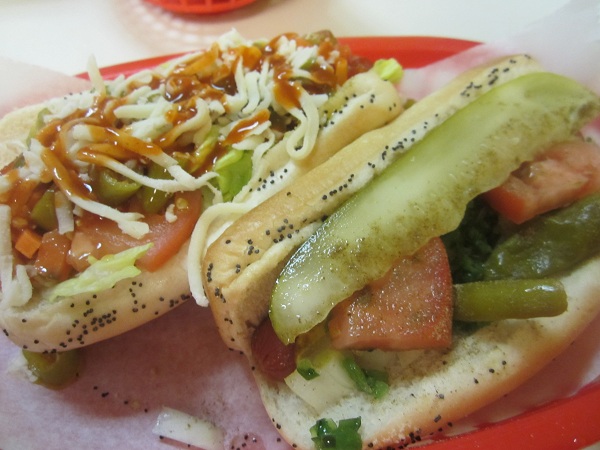 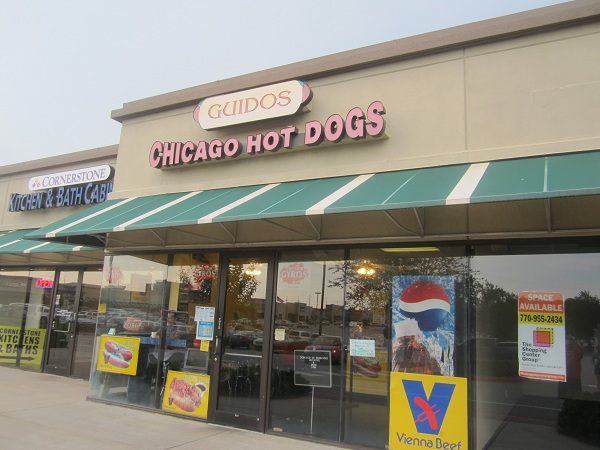 Guido’s is one of at least five places within ten or eleven minutes’ drive from our house that offers Vienna Beef products to make the perfect Chicago-styled hot dog. I’ll write a little more about these places in the next chapter; what I have learned, briefly, is that, unheralded and often unloved, their signage fading from sunlight and the laminate on their yellow signs for Da’bananas frozen treats peeling, these places are all about the service, because their food is reliably standard from joint to joint. The people at Vienna Beef don’t want their product mishandled; the reputation of a Chicago dog is a strong one.

Hot dogs are, of course, a lunch food, and on the three or four times that I’d been here in the past, it was usually around lunchtime, so I’ve seen it much busier than this quiet Saturday night. Marie and I were the only guests. She had a standard Chicago dog – ketchup, yellow mustard, chopped onions, green relish, tomato wedges, a pickle spear and sport peppers dusted with celery salt – while I had the house special, a Guido. This is made with lettuce, tomato, shredded cheese and hot sauce. The franks are, of course, Vienna Beef brand, simmered in “dirty water” and served on a poppyseed Rosen bun. 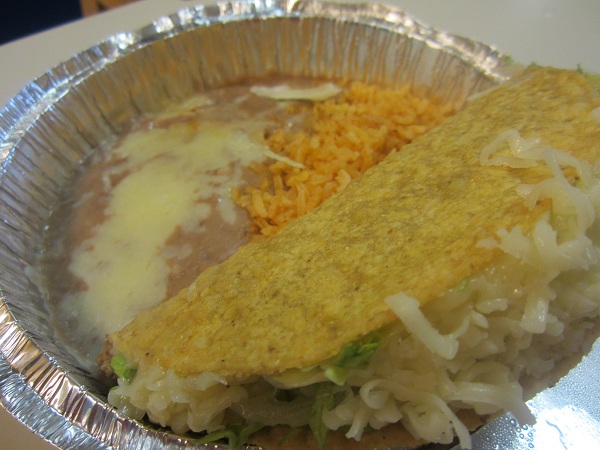 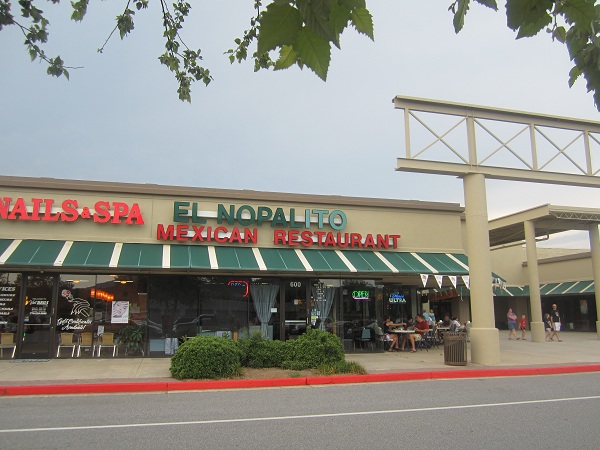 Meanwhile, a few doors down, the mercurial hero of our story was buying her own supper at El Nopalito, a venerable El-This-Los-That place which I believe has been here since this strip mall opened in the 1980s. It is frequently confused with the regional chain of El Nopal restaurants, which, let’s be frank, are mostly identical.

El Nopalito was a particular favorite of this girl that I used to date, which probably has something to do with why I haven’t set foot in the place even on those four or so annual occasions where I feel like some refried beans and identikit El-This-Los-That tacos. Like Taxco, they do a good job with what they do, with all the low expectations that come from cheese dip and beans. They always seem to have a crowd at all hours, unlike Guido’s, which sees the people drift away after about two. My daughter joined us with her carry-out meal and armload of chips. I helped myself to some, enjoyed the salsa, and also enjoyed the cup of horchata that I asked her to bring me.

Interestingly, she explained that they either misunderstood her or forgot her order, and at first gave her a Coke instead. They corrected their error and gave her the horchata and told her to keep the Coke, but she told them that wouldn’t be right, taking a drink that she had not paid for. I felt good about that. Raising mercurial teenage girls is insanely weird and difficult, but every once in a while, you get the feeling that you’ve done something right.

That suddenly not liking hot dogs anymore thing, though… that would have to stop. I gave it five days.

2 thoughts on “I say hot dogs, you say Mexican…”