Late last month, Marie and I took another short trip to Macon to meet her mother and let Marie drive her the rest of the way into the traffic and sprawl of Atlanta. This gave us another chance to quickly visit a couple of places before those two went home, leaving me the chance to mosey on home at my own darn speed.

This time, the agenda in Macon wasn’t anything all that new or unknown. The main attraction was meeting up with our friends Rex and Rachel at Joe-Bear’s and Sons, which I had visited on our last trip to town. I’d been boasting wildly about how amazing Joe-Bear’s ribs are, and it was time to put them to the test. I’ve said that these are the best ribs in the state of Georgia, and I stand by that. Nobody else at the table was quite ready to match my breathless hyperbole, but everybody did agree that they were completely awesome. Marie and I shared one order – three big bones – with Brunswick stew and beans. The stew, more orange than red, may not meet many traditionalists’ requirements as it includes peas and carrots, but it’s really good, and the baked beans, spiked with cinnamon and brown sugar, were addictively divine. Rex and Rachel also tried out their tart and sharp slaw and amazing potato salad. It’s always good when a recommendation goes over well, and always good to spend time with our pals down here.

We visited for a while and then needed to make our way to meet Marie’s mother. But we took the long way there because I wanted to visit another location of Nu-Way Weiners. See, one of the neatest things about Macon is that it has two small restaurant chains exclusive to its metro region. Nu-Way, with nine locations, started in 1916, and Fincher’s Barbecue, which first opened in 1935, has four stores, and on this trip, I decided to visit one of each. I understand that Nu-Way stayed in its original downtown location for more than fifty years before opening satellite locations, and that the first of these opened on the southwest side of town in 1969. 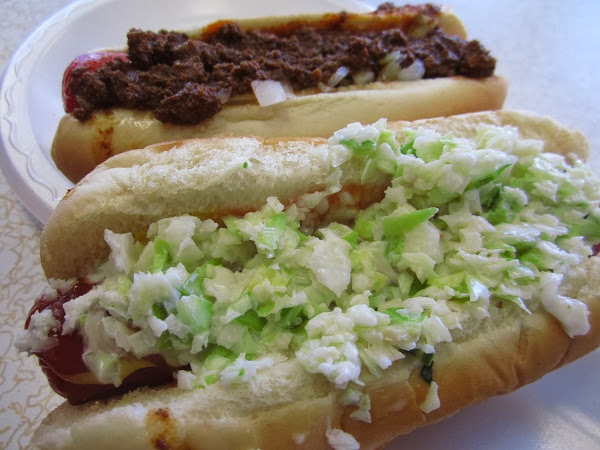 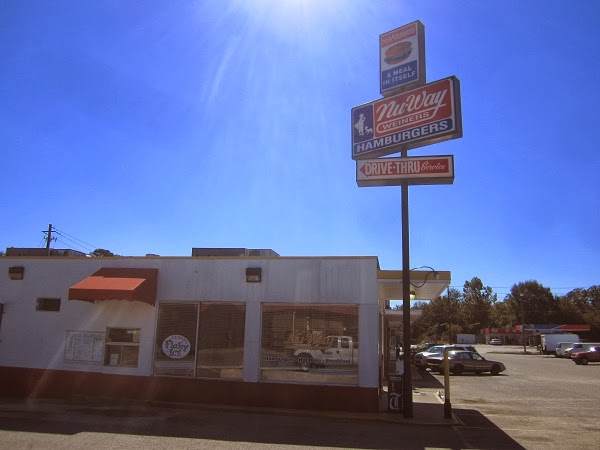 This Nu-Way is set up in a separate building next door to a strip shopping center called Rocky Creek Landing, which looks like the end of the world. There are dead malls out there, and then there are places where half the inventory sits on the sidewalk out front. I must give the Nu-Way corporate office due credit. The neighboring businesses look like they’re about to collapse into rumble and dust, but Nu-Way keeps its store clean and almost shining. The dogs are delicious, and taking a tea over flaky ice to go kept me fueled for the rest of this quite long day.

I was very, very disappointed in my photos of this building and the excellent triple-stacked sign. The sun was right overhead, and I did not realize until I returned home that I’d clipped the top of the sign on almost every one of my pictures, especially the close-ups, because the sun was in my face. Lovers of old architecture and signage should definitely consider swinging by this Nu-Way to check it out, because it’s a very well-preserved 1960s artifact. The next stop on my trip, after we met Marie’s mother downtown and I saw them off, was anything but well-preserved, but it is definitely an artifact. 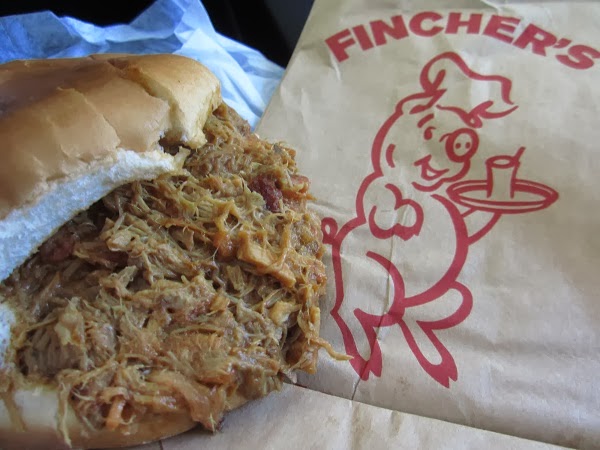 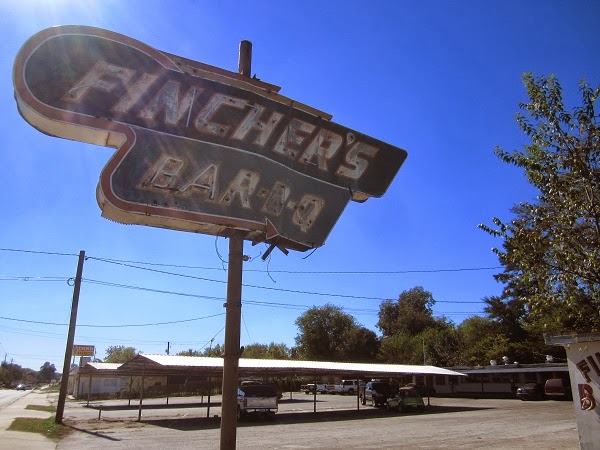 In an earlier entry, I lamented the middle Georgia tradition of cooking barbecue with the sauce, as I almost always prefer it served dry so that I may add the sauce myself. Everybody for fifty miles in every direction who follows this tradition does so because Douglas Fincher’s impact was that gigantic. He set up this drive-in restaurant with two canopies on Houston Avenue in the middle of the Great Depression, and passed the business down to his son, Doug Jr., in 1968.

To be clear, I really don’t prefer this style of barbecue to any other, but Fincher’s certainly appears to be the very best example of it. You can get pulled pork served dry, but the chopped pork “pig sandwich” is served cooked-in-sauce. This sauce, a vinegar-strong yellow blend imitated by everybody else, is just tangy enough to make it the standout in the area, and the Brunswick stew is one of the best in the state. I love the rich flavors of this stew and the consistency. 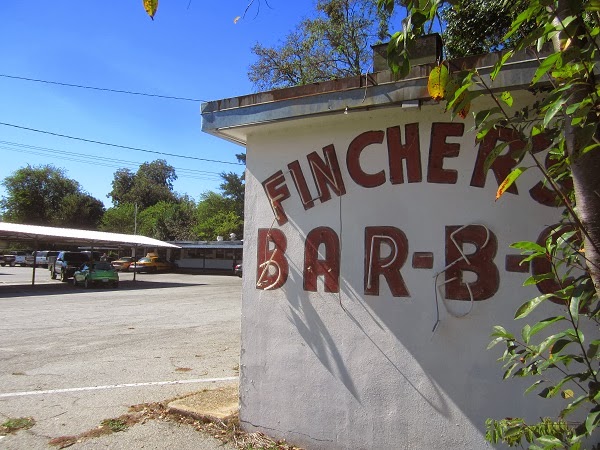 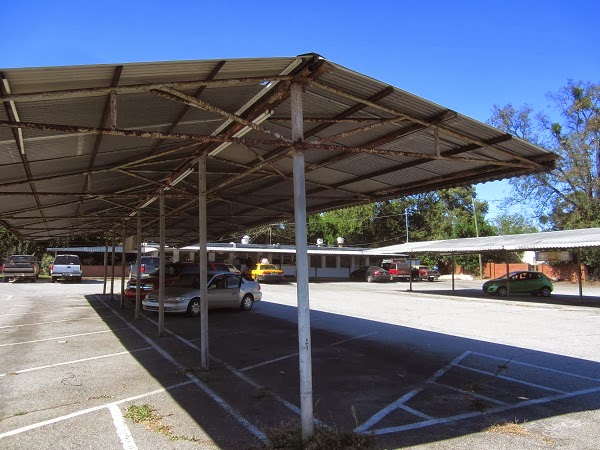 The building has certainly seen better days. It’s been noted by many that Houston Avenue is in a pretty bad side of town. What most are too polite to say is that the overwhelming majority of Macon seems to be one bad side of town or other. The drive-in has not been open for dinner in ages, which is why they haven’t gone to the expense of repairing the shattered neon tubing that, once upon a time, was added to the original sign and on the side of the old “barrack” building along one of the sides.

But come here for lunch, and you’re guaranteed the best example of this middle Georgia style and some knockout Brunswick stew. You can eat in the small dining room, or bring lunch back to your car. You may get the chance, as I did, to exchange a few words with Jake Fincher, grandson of Douglas and, since the unfortunate passing of his father in May of this year, the man in charge. Jake’s going to be steering the restaurant chain into its eightieth anniversary in a couple of years, and we’re hopeful that it will be with us for a long, long time after that.

It was during Doug Jr.’s time as owner that Fincher’s expanded to additional locations. Their second store opened in 1968, just north of I-16 on the Gray Highway. This was the first location that I ever visited, and while I mentioned it when I wrote about our stop at Fincher’s fourth store, I didn’t then have any pictures to share. I made sure to rectify that this time around. 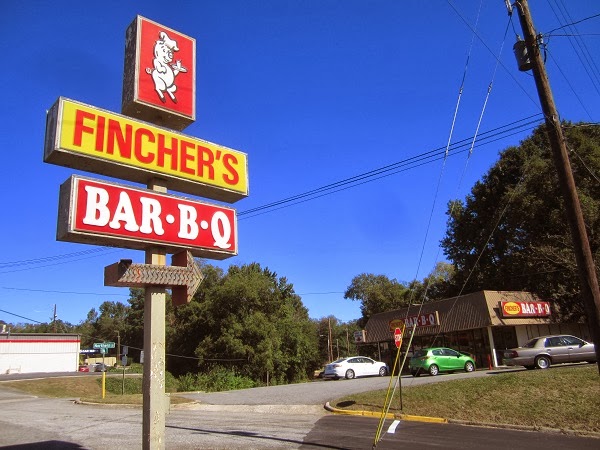 I snapped my pictures from the center lane of US-129 – we’re professionals, readers, don’t try this at home – and got back on the road, taking GA-49 up to Milledgeville to finish up a long overdue project. More on that next time.

Other blog posts about Fincher’s: